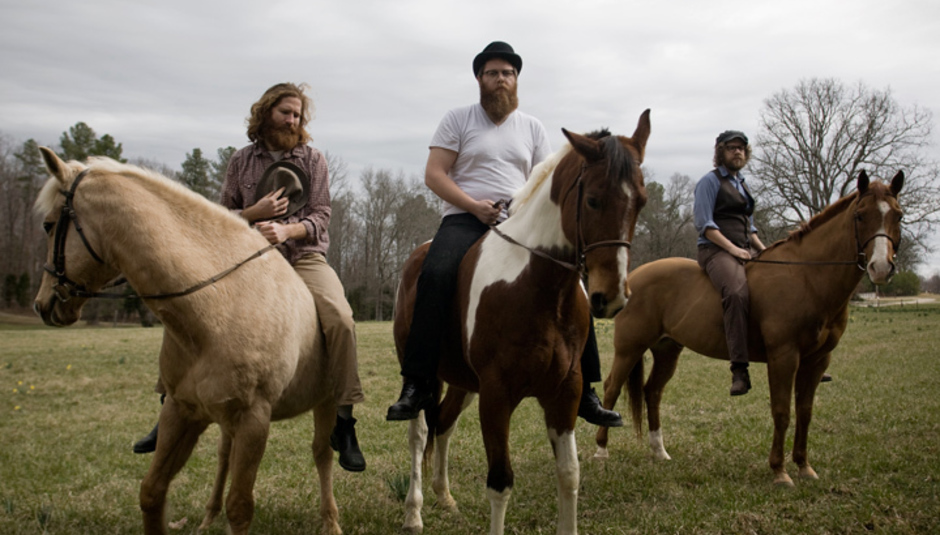 Tonight, Megafaun are exceptional. A large part of this – what tips the scales from it being merely a very good performance into what feels like a truly special one – is due to the receptive, reverent crowd, though other factors come into play as well. The band are wrapping up their European tour this evening, and it seems to have been a successful one on all fronts, endearing their wonderful Gather, Form and Fly album to a host of new fans. The air is one of celebration, and it winds up with them down in the centre of the crowd inciting a mass sing-along to album highlight ‘Worried Mind’ that largely escapes mawkishness, painting smiles across all and sundry.

The trio are both evidently delighted to be here (it’s their first time in Spain) and slightly taken aback at the crowd response. “It’s like, you’re ready to party, but really listen at the same time,” they suggest. This much is true: during the hush that falls upon spectators for plaintive album cut ‘The Longest Day’ you could almost, to employ well-worn cliché, hear a pin drop. The general brilliance of audiences in Barcelona is one I expounded on after seeing Bowerbirds go down a storm across town last year (and was hopefully implicit here), but it really can’t be hammered home enough, and it should set a-flutter the heart of anyone lucky enough to heading this way for Primavera Sound come the end of May.

But, well: Megafaun. The band gets off to a winning start, all silken harmonies and delicately picked acoustic guitars that eventually burst into glorious technicolour, eliciting whoops and hollers aplenty. Across the breadth of their set list is an instinctive understanding of each other’s role in the group, and they excel just as much in sylvan tales of California sunshine as they do the psyched-out, jazz-inflected washes of noise that graced Gather, Form and Fly its distinctive character. Highlights are plenty, but the skipping loveliness of ‘Impressions of the Past’ serves to highlight all skill sets possessed; a run through sunny strings, brass and ivory that disintegrates into off-kilter clatter before closing out in a flurry of gorgeous barbershop quartet vocals.

‘Volunteers’ is offered as a sole taster of future wares (“the only one we’ve rehearsed enough to play”), and a sedate thing of beauty it is too, admissions of love and innocence lying within. But it’s the group’s encore that takes the show to the next level, its initial noisier number dedicated to Apolo main-man Carles before the band ditch everything electric to offer the aforementioned communal take on ‘Worried Mind’. It is only now, typing this up a week after the event, that a parallel emerges, between this occurrence and what fast became a staple of Bon Iver set lists a couple of years ago – namely, the crowd’s involvement on Justin Vernon’s beautiful ‘The Wolves’.

As oft mentioned in contemplation of Gather, Form and Fly, Vernon and the three Megafauners previously comprised DeYarmond Edison some years ago. Regards the two’s penchant for directly involving their audience, any cynic could label it a cheap trick; something rendered worthless by repeat performances, any impact or spontaneity eradicated. Now, whether Megafaun regularly close shows by playing ‘Worried Mind’ among their audience I’m not sure, but it sure felt special to me, much like Vernon’s apparent joy at the crowd backing him at London’s Apollo Theatre back in 2008.

If this report reads a little gushing in its appraisal, I am sorry. But not that much. From Megafaun taking the stage till their genuinely humbled exit just over an hour later, it’s the only way it was ever going to go. It was one of those gigs, you know? From a band that might well end up one of those bands.