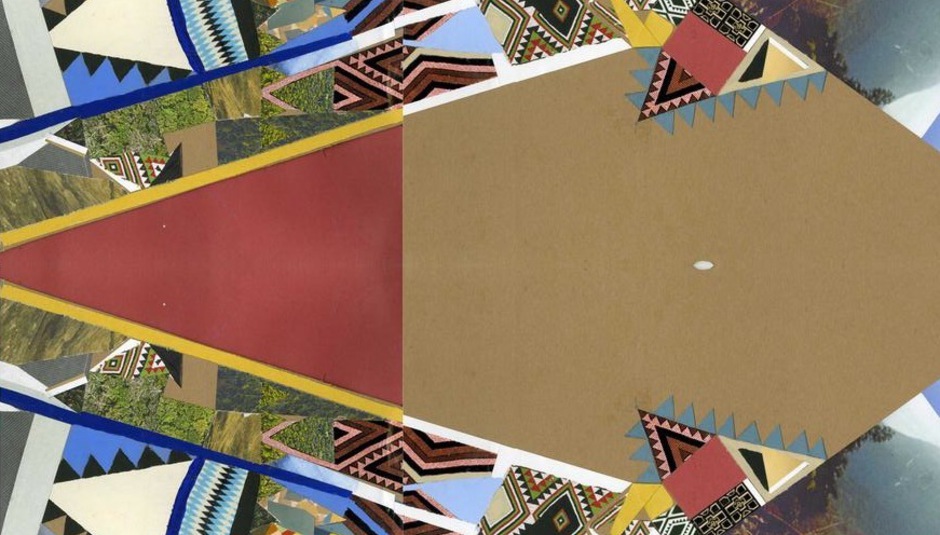 ‘A Statue That Is Perpetually Unveiled’ sounds like one of those deliberately nonsensical song titles of the sort Autechre - with their gold standard of falling asleep on the qwerty keyboard - might use. But then I, you know, listened to it. And found I really was able to see the white sheet as it was tugged away by the Lord Mayor in his vulgar jewellery; could make out the Disney castle in the background; hear the crowd manhandling balloons as it tried to clap, and gasped. But that funny old sheet, Daddy - why is it creeping back into place all by itself, and why has time gone backward, and why do I suddenly feel as if I am a vaguely sinister production of the Nutcracker, with a Sugar Plum fairy what has got so fat, she can only appear if strung from a crane?

It seems to me that any record that makes you go all Stream of Wank and rantily expansive must be good, because it means it is firing those synapses like a naughty little arsonist with a bumper box of cooks matches and no supervision. And though I am sure that after all my drivel you could be forgiven for not wanting to go inside this single's eerily perfect white turrets; and find, once inside, that all its doors start slamming of their own accord, I will urge you to put one foot in front of the other - one step forward and two steps back, just like the single - and try. I mean cripes, here I am doing it again and I am helpless, because I do want to know WHAT THE FUCK IS INSIDE THAT THING and I feel like the quivering strings are on the tip of the verge of the point of the cusp of telling me before they close their eyes slowly and say ‘You’re not ready’. I shan’t pretend to know what any of this um, 'review' means – so just take it as read I am apologizing to you at the very same time as I am unapologetically keeping these here words in the final 'edit'. All you really need to know is that I was so happy when I found this single, I had thought All Was Surely Lost for April Fifth and then it came along and scooped me away to somewhere thrilling. More here - it is one of those hand-numbered, yum-artwork-screen-printed-by-the-blerk-himself typethings.

‘Radar Detector’ tumbles about like a slinky, and just as playful. And it’ll be far too jolly for some, with its crazy ideas about going shopping with your best and darlingest indie girlfren and finding exactly what you’re looking for when you do. ‘But it’s not supposed to feel this good,’ sings Darwin – who has clearly never been to Asda in the middle of a row about whether it is fair to argue that you cannot find a person attractive or see them in a heady sexual light if you are always the one washing their pants and un-balling their socks. This, it seems to me, is perhaps the greatest argument for equity in housework; that it is sexless in the extreme - and the height of dulled eroticism - to feel you might accidentally have become your lover’s mum - and with none of the fringe benefits, like telling them off. Anyway - all irrelevances aside, if you want a timely - and lazy - analogy (and even if you don’t) let me tell you how ‘Radar Detector’ really is a confection of a single, a Cadbury mini-egg of sweet crispiness and a perfect moreish threat to your waistband; one that sees off the whole of the rest of The Musics as if they were Kinnerton advent chocolates; so much brown chalk. But, BUT - at the risk of sounding like a dreary Old - I do wish he’d take off that damned silly headband.

I think this single would be amazing, if everything on it were multiplied by ten and every dial on it were turned really, really far and hard to the right so it broke and had to stay there FOREVER. And perhaps it is some sort of Machiavellian masterplan on Future Islands' part to leave me only partly sated and make me want them more - but I think if you are going to offer something up, you should offer it all, with no caveats and messing about. What I mean by all this, is that in order to get the most out of 'In The Fall', I had to listen to it at twice the volume of everything else in this week's playlist – and that is before you even account for all the lowly Normals out there in Boringworld, who give every new song ten seconds on a tinny laptop they got free with their phone; their arms crossed in Impress Me Mode. All very frustrating, you understand, because 'In The Fall' is pretty brilliant. Listen here

What with Robin being something of an Archaela to all the current crop of shoegaze boyscouts, he more than justifies still having record label money chucked his way. Let's hope it's lots, because ‘Horse Heaven’ is rather beautiful - and were he 23, skinny, razor-cheek-boned and from Brooklyn, we’d all be outdoing ourselves to prove we had heard of him first. But as we have had chance to remark before, nobody said The Musics was fair - and in any event, there is nothing so dread as those who claim Firsties. I mean, as if sticking a flag into something made it any more yours (hideous concept), especially if you had absolutely no hand in its conception.

Sometimes it seems as if bands are in direct competition for who can be the most jaunty. And though this in itself is no bad thing, sometimes those Edywn Collins rhythms and grinning guitars fail to convince. So while I happen to think the world missed a trick in roundly ignoring Vincent Vincent & The Villains; and though it is now strangely fashionable to slap down Vampire Weekend from a great height (well done everyone, you have made a connection with Paul Simon, do forgive me if I fail to have a lie down in sheer, terrified awe at your ‘theory’), there really is a part of me that longs for a proper, actual New Housemartins to come along and make things more interesting. Bearing in mind they were as rigid as steel in their politics and harnessed their jaunty (like Collins) to some top-strength bitterness, however perky their tunes. I’m not saying fun for fun’s sake is bad – I've confessed to the opposite too many times, I am mostly All For it - but sometimes you need a bit more contrast, however jangly and beaming your rhythm section. And ‘Bloodshot Days’ – while nominally veering towards melancholy, doesn’t veer nearly far enough.

This week’s Permissable Cover comes from Wild Nothing, who does an admirable job with source material most would judge Too Amazing to try to have it out with. And he's managed to capture that quite deliriously teenage sense that something really is going to happen, at some point, not-now-but-soon; that absolutely lovely pre-emptive joy of knowing there is joy on the horizon even if there isn't any concrete joy now - which is what I like about the original. Info here - it looked to have come out in March but there appears to be a new batch. Not in the Gremlins sense, obviously.*

Vancouver’s Cosmetics go out of their way to put the doomy frighteners up one. Which provides a neat contrast to their band name and single title; kicking and screaming as it does of a 10 Best Moisturizers ‘feature’ in a wimmin’s mag. The black to the white being the fact that moisturiser features are flimsy in meaning - whereas ‘Soft Skin’ - the single, the thing - is Proper Threatening and uses some muddy synths you want to rub into your open pores and not wipe away with a muslin cloth that retails for £69 (i.e. perfectly packaged for twats who don't know what a tea towel is or that they are available for one pound on the market). Um, more here, MySpace here.

It says something not very nice about interviewing that a review of We Are Scientists almost always includes a mention of how funny they are. It either means that most musicians are not amusing (imagine!), or that this is the best thing you can say about them because their records aren't very good. Whatever it is, it shouldn't let them get away with things like 'Rules Don't Stop'. And in any case, if your singles are dread and boring, might you not apply your clever and your amusing to a more pertinent form, like writing a marvellous new situation comedy or ‘humour title'. Just a thought.

The press release for ‘Flush’ – the first record I have ever heard which could be comfortably filed under ‘scatological grime’ - tells us how Eddy Temple Morris is a “renowned arbiter of taste”. So let us gloss over how this single is strangely out of time - in the way that a pair of brand new Buffalo Boots might be - and knock this one really hard on the head. Arbiters, tastemakers, musical shepherds and what-have-yous - please all stop what you are doing and look at the board, where I am going to write it in capitalized fonneticks for those of you who still believe 'ungh' is the noise one makes when one wishes to communicate an affirmative. Because as we all know, there is no journey so thrilling as the personal one; there are no People Who Automatically Know; there are only twits - like you, or me - and people with too much time on their hands who get sent free records, and no path ever, ever, EVER compares to the Rock Trees or dot-joining you do YOURSELF - with no regard for what is ‘right’ or ‘good’ or 'now' or any other such laughably subjective concepts. Eddy Temple Morris – or anyone else for that matter – is and never will be a ‘renowned arbiter’ and to declare that a single is good because he Is One, is a left-footed misstep that makes me shiver in all the wrong places.

Sparrow & The Workshop - ‘I Will Break You’ (Distiller Records)

Sparrow & The Workshop are to be congratulated by only me because their drums - which are on a clattering sort of perma-roll, that sound fun to play - reminded me of Swell, who were one of the first bands I ever pashed on. They don’t sound anything like Swell apart from that - so let me try to be the tiniest bit useful and tell you how their single is eminently listenable.

In a quite delightful way, ‘In Sleep’ goes a bit Rumours on the chorus. And not in a Ladyhawke Must Be Like Fleetwood Mac Because She Has Vaguely The Same Hair As Stevie Nicks way. More here

Have A Little Faith In People by The Lodger

Wendy is on Twitter, here. * If you get her sozzled enough she does a very good Stripe Out Of Gremlins. Also: Louis Armstrong, though you will need a walletful of booze money for that one.

In Photos: The Joy Formidable @ Centr...