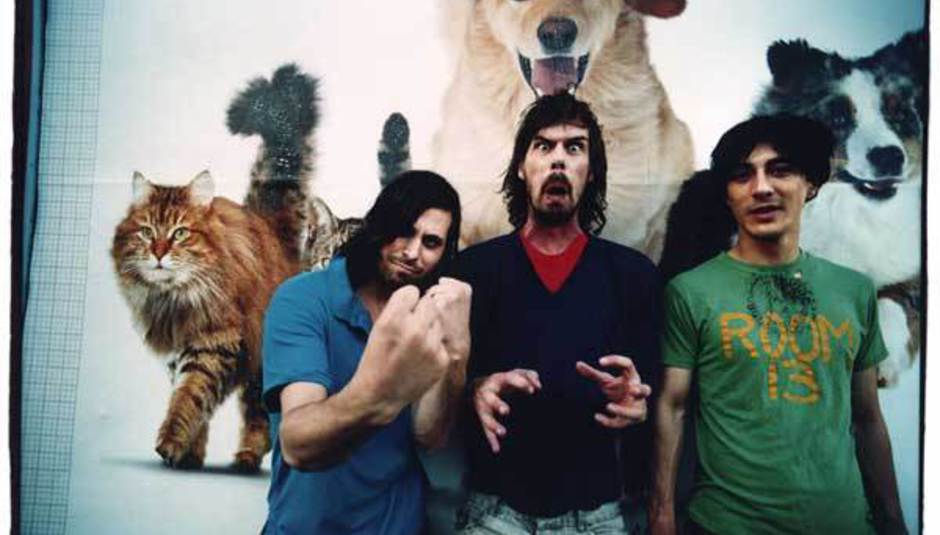 Welcome to another edition of Spotifriday, a playlist compiled from our weekly content feature on the site.

As much as we'd have loved to fill every other track on this week's Spotify playlist with LIARS, we couldn't. It wouldn't be fair on the other artists who have made vital contributions to our content over the past week. Sure, you've got the likes of Liars and St. Vincent up top taking the plaudits, but there's also bands like Chrome Hoof putting in the hard yards in the middle of the park. No, I don't even know what that's supposed to mean.

It hopefully hasn't escaped your attention that this week has been Liars Week on Drowned in Sound. Especially as I alluded to it in the introduction. They've provided some high-quality content, ranging from an interview about the new record, as expected, to Angus telling us about his own sisters. Neato. 'Scissor' gets things rolling on Sisterworld as well as this week's playlist. Will I get killed if I say when it 'kicks in' it reminds me of...Pendulum? It's also an omen of things to come in terms of FUZZED UP SHIT.

...as you will hear throughout St. Vincent's Actor. I'm not sure there's an artist who features more frequently in the list than Annie Clark's alias, but that's just reflective of her overall quality. This week she told us that her, Os Mutantes and Liars had joined Beck's very exclusive Record Club, but left us hanging in relation to just WHAT the album was.

This one's a bit sharp on the ears at first, though it descends into something so profoundly groovy that you forget that it's lacking much mid-range frequency and just GET ON WITH IT. In more than one way. It's a wriggly bastard of a tune, to be sure. May also induce 'ironic' dancing. Listen to the new Neon Indian track here

With a bit of luck, the BBoys' new one, Hot Sauce Committee Pt. 1 will be released in September, if MCA has recovered enough. That's what Yauch himself had to say, anyway. It may not quite reach the peaks they hit in the early-mid '90s, but hell, we're excited about it.

It SO sounds like she's screeching 'ARSEHOLE', doesn't it? I mean, she may well be, but hearing that word come from a lady's mouth is not nice. Still, judging by the way she is presented here, any issues of lady-ness were chucked out into a 4x2 skip a LONG while ago. Click here to read about Chrome Hoof's new album and download a free em-peh-freeeeee of a track from't.

Sometimes it's nice to hear the actual lyrics in a song, such as this one. Precisely one-half of Blood Red Shoes wrote this week about struggles in the music industry offering some very profound advice and insight. It's a worthwhile read.

Flying Lotus returns with a new record in a month or so, and after hearing the album preview he posted this week, the anticipation climbs to previously unscaled heights. Sticking it on repeat for a while is probably a sensible idea, though you could do worse than listening to 'Parisian Goldfish', continuing the theme of fuzz as ably as any track here.

Let's Get Sued may not be a good name for an album. And Black Daniel may not be the prizest choice of a band name. Regardless, their album's at least half-decent, according to out review. I believe, if my GCSE in Music taught me anything, that this is in 3/4 time. Which qualifies it as a waltz?! Maybe.

A slight anomaly if dirtier, scuzzier sounds abound in this week's playlist, with what we have on 'Stick To My Side' being more abundant in chiming and tinkling sounds. In English we'd say 'Ding-Dong' as the onomatopoeiac word for the sound what a bell makes, in German I believe they say 'bim-bam', or 'kling-klang'. Just as an aside...

This is much more like it. A chunk of noise without any discernible vocals, each component part fighting against the other, producing a muddy thickness of discord. The re-issue of Bardo Pond's Bufo Alvarious was reviewed favourably here.

Another band beginning with the letter B. It's like flaming Sesame Street in here. One half of Broken Bells is BRIAN BURTON. BB. It's written in the stars. Anyway, we sent Wendy Roby over to Paris to interview both of them, and somehow, it was captured on videotape.

Harmony gets a bad reputation. Partly for good reason, mind. There's plenty of it here, along with a shedload of strings. It's all a bit much to take in, though. Overwhelming. Read our review of their latest record here.

Matthew Herbert has never struck me as anything less than a totally strange individual. His video for 'Leipzig' doesn't do an awful lot to change my opinion, nor would I want it to. I'm not totally sure how this track was constructed, but I'm fairly certain it was unconventionally done. Waiting for the hammering and jostling instrumentation to begin has been about the most unnerving experience of the week.

This is our Single Of The Week, reviewed, as ever, by Wendy Roby. She FINALLY came round to Fanfarlo this week. Better late then never...

Belle & Sebastian are our seventh and final 'B' band. We did not pick a song beginning with B but one with F instead. A serene way to end what started off as a pretty rabble-rousing playlist. Every excuse for an afternoon slumber after finishing it off, though.

Click here to listen to this week's Spotifriday playlist and here to have a peruse of all of our Spotify-related content.

In Photos: The XX @ Manchester Academy 2