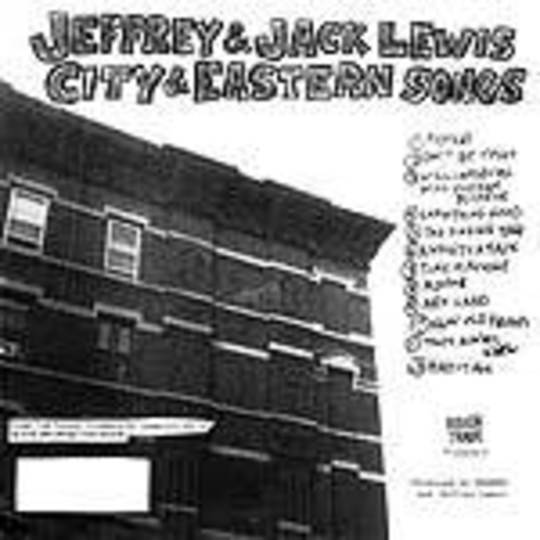 Jeffrey Lewis is a God, there’s no denying it. For the uninitiated, the singer/comic book artist, born and bred on New York's Lower East Side, is a kind of Leonard Cohen or Adam Green cross-bred with Woody Allen; lo-fi folk aesthetics blended with neurotic/philosophical/hilarious ramblings firmly rooted (as the album title suggests) in the hustle of the Big Apple. At least, he was lo-fi: 2001’s ‘The Last Time I Did Acid I Went Insane…’ and 2003’s ‘It’s The One’s Who’ve Cracked That The Light Shines Through’ both coming from the same school of crackly ‘anti-folk’ as The Moldy Peaches and Diane Cluck. However, like Green before him, Lewis here moves towards a fuller production (this is his first album to be recorded in a studio), his voice coming to the fore for the first time, with layered strings adorning many of the tracks on ‘City & Eastern Songs’.

Lewis’s themes and preoccupations, thankfully, remain untouched. Some of his lyrics are to be lived by, seriously: see “when you feel awkward and unsteady/just try not to forget there’s so many people who’ve liked you” on ‘It’s The One’s Who’ve Cracked…’’s ‘Alphabet', or, “bad times give you something to talk about/the next time you feel you’re all worn out/remember life is a story, don’t you doubt/it only takes a day for everything to turn around” on ‘The Last Time..’’s ‘Life’; I could go on: nearly all of his songs contain at least one lyric you wanna tell people about when you hear it. His songs have (as he puts it in an interview on the splendid BBC Collective website: http://www.bbc.co.uk/dna/collective/A6999853) a “clear split” between the poignantly autobiographical, and the absurdly surreal. Here, on ‘Moving’ Lewis sings, with a simple plucked acoustic accompaniment, about changing houses, as always blending humour with understated wisdom: “you didn’t have to do it all by yourself/some friends came over and helped…it wasn’t hard mopping the floor/ why didn’t you ever do that before?”; whilst on ‘Time Machine’, a jittery punk number with his brother Jack on bass and shared vocals (the album’s actually credited to the siblings together), they scream dates gradually going further and further back in time, until Jeff eventually shrieks: “a hundred million BC/ ah, fuck!”.

Sometimes the real and unreal come together; when they do the result can be some of Lewis’ most memorable work. On ‘Williamsburg Will Oldham Horror’ he sings of how, on his way to “remaster some dumb old album”, he thinks he sees “Will, Bonnie Prince, Palace, whatever” on the train, wearing “the same big rock-star sunglasses he had on stage at the Ballery Ballroom”. In a moment of personal doubt (“I kinda thought I was gonna grow up to do stuff that would benefit humanity/ but it’s getting harder to tell if this artist lifestyle is even benefiting me”) he approaches “the king of all this shit”, asking him if it’s all really worthwhile, if “the world really would be better if we were all uncreative drones”. I’ll leave you to find out what happens next. Elsewhere, on ‘Don’t Be Upset’ he beautifully pastiches relationships, singing of a girlfriend who complains: “every time I see your friends they just ask me where you are again/ and it hurts, it makes me feel like dirt/ I’m just gonna write where you are on my shirt”; whilst on ‘Anxiety Attack’ Lewis, to an electronic beat (something unthinkable on his previous records), reels off the things that keep him awake at night. This mixture of an unexpectedly adventurous mix and typically droll, self-aware lyrics makes ‘City & Eastern Songs’ his most satisfying album to date, managing to remain as personal as his earlier work whilst adding a new dimension at the same time.

Looking back at what I’ve written I guess it could come across like I’m biased towards Jeff, like maybe I want this album to be great; that I’m not being objective. And don’t get me wrong, there are moments on ‘City and Eastern Songs’ that don’t really work: ‘The Singing Tree’ is a little to wordy for its own good, ‘Something Good’ will annoy those not already enamoured towards his punk leanings. But fuck it. My friend recently told me how he gets jealous whenever he’s about to play someone Jeffrey Lewis for the first time, and that’s how I feel too: his songs are so full of self-deprecation, of honesty, sadness, humour and truth; he’s nothing less than a gem to be held up and treasured. And in a world where a song that begins with the line “my life is brilliant” can stay at number one for over a month, we need that more than ever.