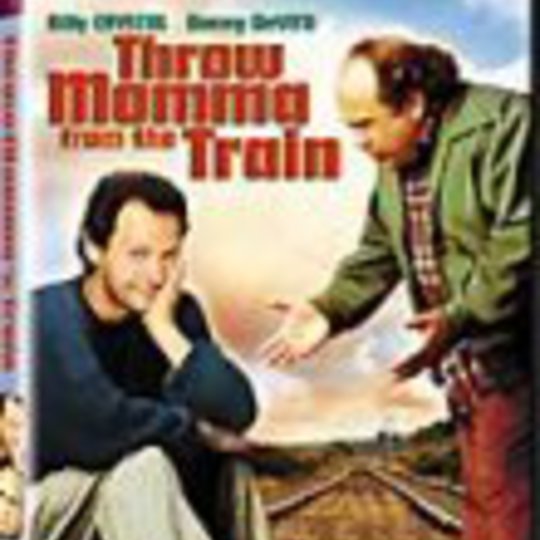 Throw Momma From The Train** is, I suspect, the type of film that most people have seen but have forgotten all about it. When you ask people if they've seen it they'll probably say that they're not sure until you tell them that it has Billy Crystal in it, and Danny DeVito gets shouted at a lot by his old bag of a mum.

It's a shame really that the film never got the recognition it plainly deserved as it really is a delightful little comedy without ever breaking through to become truly great.

The plot is pretty familiar if you've seen _Hitchcock's_ 1951 classic **Strangers On A Train**. Crystal plays a teacher who runs a creative writing class and who is currently undergoing a bout of severe depression as a result of his ex-wife (the underused but superb Kate Mulgrew) running off with the manuscript he had written which has now become a best seller under her name.

During a class he bumps into a student of his - Owen (DeVito), and by a series of misunderstandings gets into his head that Larry (Crystal) would like to have his ex-wife murdered. As a swap, Owen hopes that Larry will kill his monster of a mother (the truly brilliant Oscar-nominated Anne Ramsey) to create the perfect crime.

One of the most enjoyable elements to this film is the patent nastiness that seems to flow through most of the characters in the film. They display all the questionable morals that Farley Granger and Robert Walker did in Hitchcock's film. It makes a nice change from the usual romance impaired comedies that are usually served up by Hollywood.

Without doubt, the star of the show is Ramsey. Although she's more famous for playing Mrs Fratelli in **The Goonies**, this was the role which she should really be remembered for. She plays quite possibly the most monstrous and dislikable mother in cinema history, yet she's so good that you really don't want Crystal to bump her off. Mind you, neither does he.

The acting is simply top-class. DeVito shows why he was at one time the master of short-arsed, wise-cracking villainy, whilst Crystal's performance leaves you pondering why he hasn't made a good film for years. The plot is not much different from the aforementioned influence, but why change something that was sublime in the first place?

It's not without it's faults, though. Some of the slapstick gets in the way of the blackness of the comedy on offer, and Kim Greist's role as Larry's prospective girlfriend is completely pointless. But aside from these, **Throw Momma From The Train** is a film deserving of reappraisal, and at £5.99 it is an absolute bargain. It's out to buy now.