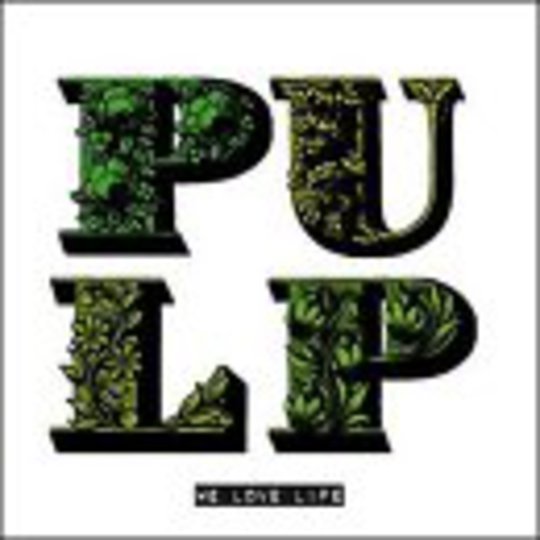 If you thought ‘We Love Life‘ was going to be 'Pulp's ‘return’ to the wacky, radio-friendly BritPop-era Pulp, then you’re fresh outta luck I’m afraid.

‘We Love Life‘ is, if anything, a continuation of what came before, namely the angry swirl of dark hues that was ‘This Is Hardcore‘.

This makes sense, ignoring the ‘lost’ pre-90s material, each of Pulp‘s albums have taken a natural progression on from each other. If you like, ‘His ‘N’ Hers‘ introduced our hero, Jarvis, idling away a hollow afternoon. Nothing to do but slouch on the couch; daydreaming about girls, about his first time, about boredom killing sex on the carpet. ‘Different Class was the night-time album, out on the town, dressed to impress. Surely tonight was going to be the night!? But ‘This Is Hardcore‘ saw that the evening had soured. Come the early hours and Jarv was sat, drunk and miserable on the cold steps outside the nightclub, head in hands and sick on his shoes. The promise of a better tomorrow seemingly dashed.

And now in the dawning light: ‘We Love Life‘ and Jarvis takes a ramble through the bramble. Will the simple pleasures of Mother Nature provide the fillip that will keep Cocker‘s pecker up? In a word: no. Not quite, anyway.

It’s strange that an album named ‘We Love Life‘ should use so much imagery infused with death and decay. A cursory listen to some of the tracks and a glance at the track-listing - * ’Weeds’, ’The Trees’, ’Birds In your Garden’* etc - could give the impression that this is a Pulp revived with a refreshing dabble in a pastoral psychedelia similar to that of the late 60s English folk-rock bands. Well, it’s true to a certain extent, but the countryside detailed here is no sun-dappled, idealised idyll, this is more the scraggy, overgrown thickets at the edges of a city and behind the factories. All stinging nettles and wiry grasses where people dump their rubbish and teenage junkies shoot up. An undergrowth that is littered with ripped up porno mags, oil cans and used syringes. This is reality, a bold, stark reality but not an unsurprising one, for Pulp have always had a dark heart beating away behind Jarv’s quips and the knowing winks of the band’s bright, shiny videos.

From the idler’s ennui on ’His ’N’ Hers’ and the bitter, self-righteous class rage of ’Different Class’ to the bleak desperation of ‘Hardcore’, Pulp have not been the funny, kitsch, BritPop clowns that they have often been painted as. But I guess the endless playing of Virgin radio favourites like ‘Disco 2000’ and ’Something Changed’ as well as all of those jokey Jarvis appearances on ‘TFI Friday’ and ’Shooting Stars’ and the like sealed their fate. Ridiculous really, because they’ve always been one of the angriest bands around. But then they played the game, they only have themselves to blame.

‘We Love Life’ doesn’t start very promisingly, ‘Weeds - the transparent re-write of Jarvis’ least favourite Pulp song, ’Mis-Shapes’ - is just crap. A stodgy, Oasis style riff-a-rama, it nevertheless sets out their vegetation motif. Weeds = puny people - but! - Weeds also = unloved but tenacious survivors who will gradually take over! This is better examined on track two onto which track one segues.

’Weeds II (origin of the species)’ squelches into life and producer Scott Walker makes his presence felt. We have the The Swingle Singers Ahh-ahh-ing over Howie B’s gurgly programming whilst swirling, other-worldly strings shimmer like glitter balls refracting golden disco lights. Jarvis takes the gardening analogy to breaking point as a way of sniping - yet again - at the moral bankruptcy of smug media/socialite metropolitan living. “Come on, do your funny little dance“ says Jarvis, imitating their witless braying, horrified that he had become nothing more than a funny little amusement for them. Luckily though, the rest of the album doesn’t deal quite so explicitly in the ‘post-fame’ crisis that mired most of ‘Hardcore‘. That said it isn’t exactly jolly either.

‘The Night Minnie Timperley Died‘, ‘The Trees‘, ‘The Birds in Your Garden‘ and ‘Roadkill‘ all seem to deal with the death of a girl[friend].

‘Minnie Timperley‘ comes on like the prequal to ‘Joyriders‘ where a “beautiful girl“, much to Jarvis’ chagrin, flirts with other boys, “How can a girl have sex / with these pathetic teenage wrecks?“ he muses in disbelief. In the end though she drives off with some “older guy“ who ends up - possibly, it’s ambiguous - kills her.

‘The Trees‘ is a slight thing bolstered by Walker‘s ‘pop-single as epic’ production. Beneath the gloss however, under the trees leafy boughs lies something darker. At the very start Jarvis spies a magpie in the branches and immediately trains his air rifle on it and shoots it dead, shattering the woodland calm. It echoes the 1967 Love lyric: “There’s a bluebird sitting on a branch / I think I’ll get my pistol“, which was a pointer that the Summer of Love’s flowery image was wilting and dying, a portent of the troubles to come the following year.

“Your skin is so pale against the fallen Autumn leaves / & no-one saw us but the trees“ sings Jarvis. Is the girl dead? Similarly, the swooning ‘Birds in Your Garden‘, whereupon Jarvis steals a final night with a girl who, it turns out, could be leaving him in the morning, but the birds' singing may hint at something darker: “Come on, hold her & kiss her & tell her you care / If you wait ‘till tomorrow / she’ll no longer be there... / You know it’s now or never“.

‘Roadkill‘ is an elegy. An exhausted sounding Cocker laments a lost love to the ghostly weeping of an electric cello. An empty, chilling loneliness haunts this piece as simple memories of a girl flood Jarvis’ mind: “The feel of my arm around your waist / the pale blue nightdress that you wore... / all these things I can’t forget / tho’ I don’t see you anymore“

The album’s centrepiece is the virtuostic ’Wickerman’. This has Cocker as narrator in a similar vein to songs like ’David’s Last summer’ and 'Inside Susan and is a typically detail packed vignette based on Cocker’s memory of an actual river that winds it’s way through, and under his home city of Sheffield. Once, as a teenager, he took to the “sludgy, brown“ water on a homemade raft and followed it down. Here he re-imagines it as a place where he courted a girl who is made up of a composite of many different girls. In a reverie he dreams of taking his girl back to the river that burbles and flows forever in his memory, and they will both “float on, wherever the river may take me“. Musically the track quietly ebbs and flows, never distracting, always enriching. Rich and melodious though smartly economical it perfectly complements Cocker’s dreamy reminiscing. One of Pulp’s finest ever moments.

It ends with magic. Finally out of the dark woods Jarvis emerges, his inner-demons still present but now at peace and Sunrise acts as a catharsis. The sun breaks over the horizon and a new day - the new day - begins and Cocker feels the redemptive power of the sun, “All my achievements / in days of yore / range from pathetic / to piss poor,/ but that‘s all gonna change. / Because here comes sunrise.“.

And with that he leaves, disappears into the sunlight as the band takes over. A heavenly choir, like brilliant sun-bursts, soar in the firmament as guitars and keyboards circle in ecstatic sound.

It’s been an often sombre trip through Cocker’s dark night of the soul, but though dark clouds hang heavy, he eventually says, shafts of light can still shine down on us, and, yes, it is worth waiting round till morning. For who knows what the new day may bring?

Today could be the day we love life.

Past the near meadows, over the still stream,

Up the hill-side; and now ’tis buried deep

In the next valley glades:

Was it a vision, or a waking dream?

~ Keats ’Ode To A Nightingale’