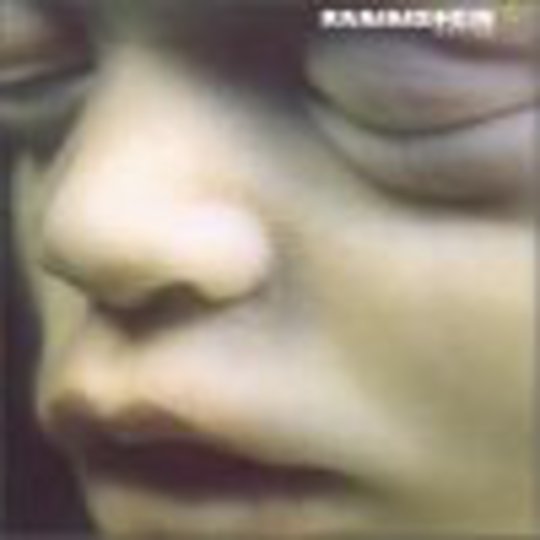 Germany eh? What's it given us? Cheap BASF tapes, arrogant racing drivers and the marvellous Die Fantastischen Vier. Or something. Oh, and those Nazi twats but we don't like to talk about them... just read a bit of Primo Levi for that.

There's something else too... Industrial / Goth / Metal / Shock rockers Rammstein whose name literally means "ram in", a name that perfectly describes their in-your-face live shows, but what about the tunes, eh?

Well, Mutter (that's German for 'mother' yanno) is their third studio long-player and weighs in at a healthy 11 tunes, with titles such as Mein Herz Brennt (My Heart Burns), recent single Sonne (Sun), Zwitter (Hermaphrodites) and Rein Raus (In Out). Nice mix of perversion and intense anger on the titles front, but I ask again, what about the songs?

Well, given that my only previous exposure to the band came in the form of their cover of Depeche Mode's Stripped on a tribute album and a couple of tracks on the Lost Highway soundtrack, I'm not really the best person to judge but their sound seems to have been tidied and perfected over the past few years. If you're looking for comparisons, imagine Marilyn Manson and Nine Inch Nails with the odd Metallica-esque riff throw into the pot. Opening track Mein Herz Brennt features extremely Gothic strings (which make a comeback on final track Nebel, or Fogs, which is absolutely gorgeous).

I think one of my favourite tracks is Spieluhr, which I can't translate being crap at German. As well as the obligatory big riffs, there's an excellent, electronic sounding voice on the choruses and mucho twinkly bits. If I understood a ruddy word of it, I'd sing along. LOUDLY.

Ditto Mutter, the title track. Starting out gently with just guitar and slightly less butch vocals than the rest of the tracks, it soon builds up into a mini-epic. Slight bit clichéd musically, sure, (that gentle verse, rousing chorus, less gentle verse, even more rousing chorus, solo, outro formula's been used a fair amount), it's nevertheless a great song.

Still, that's the thing about the album... despite being sung entirely in German, it's highly listenable. The riffs are nice and chunky, the production is polished and the tunes generally grab you by the balls. If it wasn't for this, I could write them off as another shock gimmick band. But I can't.

Dieser Felsen mögen ein Weibchen! Or something. Metal kids, check this out... it shows up bands like Mudvayne, Godhead and the like as the gimps in slap they are!

Letting off the Happiness