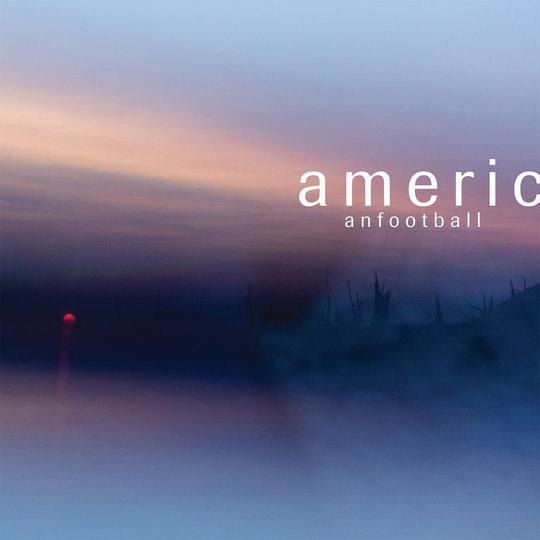 Six years ago, when Richard Linklater concluded his critically-adored Before trilogy, Ethan Hawke - its co-writer and co-star - said that he never knew there would be a sequel to Before Sunrise when they shot it in the summer of 1994, but that when they did make an unlikely sequel nine years later, it seemed inevitable that a third would follow. The parallels with American Football are obvious. They recorded their now-seminal debut album in 1999, almost as an afterthought; after a short-lived stint as a live band in their college town of Champaign, Illinois, they were gearing up for graduation when a friend, Matt Lunsford, urged them to make a record out of their modest collection of songs, for release on his then-fledgling Polyvinyl label. Mike Kinsella was thrust into the role of frontman as he hurriedly penned lyrics and cut vocals. The album was finished quickly, and released to scant fanfare. The band split as they finished college.

Like Before Sunrise, American Football was never supposed to be followed up, instead sitting as a tantalising cliffhanger - what might have been if these people hadn’t been forced by circumstance to go their separate ways? Kinsella maintained a modestly successful solo career under the name Owen, but guitarist Steve Holmes and drummer Steve Lamos left music behind. It was only five years ago that the group, improbably, juddered back to life, after the advent of the internet had facilitated American Football becoming a slow-burning success, with a burgeoning cult fanbase. Suddenly, they had to figure out how to be a band again.

That’s the key reason for a third album seeming so nailed-on to follow the second; the whole process of making that follow-up, also called American Football, was one of tentative approximation and the gradual unpicking of practicalities. There was an incredibly delicate balance to be struck. On the one hand, they needed to make an album that sounded like American Football, that would retain the arpeggiated guitars, the swells of brass, and the palpable angst. On the other, to force themselves too firmly back into a pair of shoes that they’d never planned on digging out of the back of the wardrobe would be disingenuous; three guys approaching forty channeling post-collegiate anxieties seemed a lamentable concept, as did the idea of trying to too closely recreate an album now held up as near-perfect. That was especially true when two-thirds of the band had barely picked up their instruments in 15 years.

What all of that meant was that LP2 emerged as some kind of amalgam of the American Football that was and the American Football still to come; instrumentally, the album was largely faithful to its predecessor, but Kinsella’s voice had changed markedly, both literally and figuratively. It was a handsome album that did justice to the original but, as Kinsella said in a recent interview, they felt they’d only gotten it around 75 percent right; there was scope for improvement, especially now that they had succeeded not only in retaining their new-found fanbase, but in navigating the unusual logistical challenges, like juggling writing, recording and playing live around the globe with familial and professional commitments. They were ready to again do what they did when they first started out - face forwards, and break new ground.

Album number three - again, American Football - was announced last December, and fans were mock-horrified to discover that the artwork did not feature the iconic house that adorned the first album’s cover. That image, of what looks like the quintessential American college rental, shot at midnight by a camera gazing longingly at its highest bedroom window, has become a visual byword for the band, in large part because it was, for many years, the only frame of pictorial reference for them (save a single, babyfaced press shot). There’s also the fact that it genuinely is one of those rare covers that so intangibly and so strongly captures the sound of the album, like Loveless, Unknown Pleasures or The Downward Spiral. Instead, this time, we get swirling fog over an eerie, purplish sunrise, shot ten minutes down the road from Champaign.

LP2’s cover art was shot inside the famous property, and bassist Nate Kinsella, who has rounded out the now-four-piece lineup since the 2014 reformation, initially wanted to front LP3 with something much more dramatic - the ruins of a burned-down house. That he would suggest such a bold depiction of the band’s break with the past is telling as to his development with the band; when he first agreed to play bass at the initial live shows five years ago, he did so withconsiderable reticence. There was no bass on the first album, so he reasoned that, if adding it to the songs live ended up fucking them up, he would be the guy who spoiled this beloved record (he didn’t). He contributed to LP2, but remained timid, and didn’t have a great deal of compositional input.

That is patently not the case on LP3, on which he took a key songwriting role - given that he studied composition at school, this is no small asset for the band. Where LP2 saw them focusing on what people expected of American Football - skewed time signatures, undulating guitar melodies and maudlin horns - this album has them asking themselves, ‘what don’t people expect from this band?’ The guitars and brass survive, but everything else is fresh. The record’s opener, ‘Silhouettes’, opens with the soft chiming of a bell before ushering in a spiralling vibraphone; when the familiar guitars and percussion kick in, they’re as part of something new, a simmering, shape-shifting seven-minute epic that shivers with the sort of nervous trepidation that you might expect from a band who, for the first time in two decades, are finally beginning to forge a new musical identity.

Elsewhere, the deviations from the 1999 playbook are myriad, and they’re less flourishes than they are foundations. The emotional payoff on the gorgeous ‘Heir Apparent’ comes when the Omaha Children’s Choir picks up the refrain for the outro. ‘I Can’t Feel You’ is structurally mercurial, built around ghostly backing vocals, a complex, daring bass line, and striking reverb - the latter facet runs through the whole album. The glacial centrepiece is ‘Doom in Full Bloom’, a panoramic take that is American Football mark one suddenly presented in glorious technicolor. The melodies, the ‘Summer Ends’ trumpets, the lyrics that flirt with melodrama knowingly enough to get away with it; it’s an expansion of the band’s original sound so texturally rich that you wonder whether less really was more on LP1 after all. On the evidence of something this hypnotically deep, the younger Kinsella’s early concerns about sonic augmentation were not warranted - suddenly, even LP1’s most fully realised moments sound a touch primitive.

The most profound change to the fabric, though, is the inclusion of guest vocalists for the first time. Female foils are common on Kinsella’s Owen records, but entirely new for American Football. Rachel Goswell of Slowdive lends the aforementioned shadowy backing to ‘I Can’t Feel You’ - understandable, given how close it comes to full-blown shoegaze. Elizabeth Powell of tourmates Land of Talk takes a similarly shimmery approach on ‘Every Wave to Ever Rise’, with French lyrics that she and Kinsella hammered out between them.

The star turn, though, comes courtesy of the highest-profile of the three features. Hayley Williams of Paramore has made no secret on social media of American Football’s influence on her own music, and her scene-stealing appearance on the pseudo-duet ‘Uncomfortably Numb’ makes it the album’s standout; even if she’d never made mention of her love of the group publicly, you’d know deeply she understood them on first listen to her contribution. On a track that crystallises the album’s key themes, she pitches her part with just the right level of nuanced theatricality. Is she on Kinsella’s side? Is she chiding him? Is she just another reflection of his internal monologue? The appeal is in the ambiguity. For the first time in my life, I find myself wishing I knew more about the sport the band are named after, so I could call Williams’ recruitment ‘the best American football-related signing since X player went to Y team.’

‘Uncomfortably Numb’ has Kinsella wrestling with age and parenthood, something he does throughout the record; if you were to pick one lyric out to tie the whole affair up with a neat bow, it’d be, “I blamed my father in my youth / now, as a father, I blame the booze.” He strikes a thoroughly moving sweet spot between his work with the band to date, which always had more of a universally emotional flavour, and the words he writes for Owen, which tend more towards the hyper-specifics of his own life. He retains his coy predilection for sweeping statements - the refrain from ‘Heir Apparent’ is “heir apparent to the throne, the king of all alone” - but what’s new is just how bruised he sounds by the pace at which the years have rattled by. On ‘Silhouettes’, he’s grasping for his younger self’s romanticism, while ‘Doom in Full Bloom’ sounds dangerously close to mid-life crisis territory. However hard he tried on LP2, he can’t turn back into that young man in Champaign, 1999.

Therein lies the beauty of the second life the band have been granted, all these years later. It enables you to view their work through a lens like Linklater’s; one that is fascinated, primarily, with the passage of time and its effects: on circumstances, on relationships, on inner selves. It reveals the dichotomy at the heart of this album. American Football are still racked with insecurity, but now they have the wisdom and language to express it more incisively than ever, musically and lyrically. As Hawke’s character put it in Before Sunset: ‘now I'm older, my problems are deeper, but I'm more equipped to handle them.’