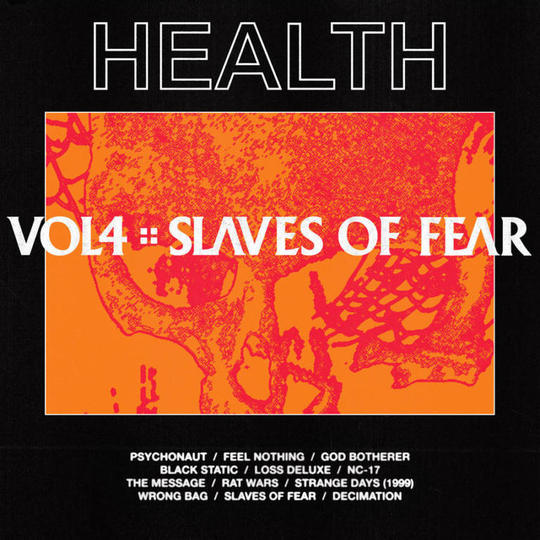 The first time I sat down with HEALTH's Slaves of Fear and stuck it on the stereo, it took a good five repeat listens to try and get a handle on just what was actually happening. I knew I liked it, but couldn’t really figure out what was what, and it left my brain a bit fried. The second day I sat down with it and stuck it on the stereo, it weirdly felt like an old friend - the whole shebang just clicked, and I somehow knew every inch of darkened, grizzled white noise. It’s the first time I can think of a record oozing its way into your brain via osmosis.

Anyway, delving into the album itself, what we’re essentially given here is the darker, broodier, more gloomy cousin to HEALTH’s previous album, the very good Death Magic from all the way back in 2015. If you feel like that wasn’t so long ago, compared to the world in its current state, it was a beautiful, blissful utopia, pre-Trump and pre-Brexit. Four years can change the world, and really change a band though, and so it goes that they shed a member in Jupiter Keyes (who can now be found opposite ex-Crystal Castles vocalist Alice Glass) and then hunkered down as a trio to try and document what a HEALTH album should sound like in 2019. To crack out an over-used journalistic cliche, it really does sound like a product of our current time.

Slaves of Fear is pretty much summed up by its title track: a pounding, rapid fire stomper in which searing sheets of white noise burn over heavily processed chugging EBM riffs, whilst all the while Jake Duzsik’s fragile voice skims over the chaos underneath, powered by a heavy gloss of shoegaze reverb. That’s a good thing, by the way.

Put next to the neon bounce of Death Magic, which isn’t a particularly ‘fun’ album (although it is very good), SoF properly feels like a real big delve into the gloom that was explored, but never fully embraced on their previous record. Whether that’s to do with the state of the world, or just looking internally at their own relationships as a newly minted trio, it’s difficult to say, but lines like “Slaves of fear, from the moment we're born / Yeah, we want to feel love, or we want to be numb” certainly paint a picture.

Taken as a whole, SoF continues the band’s rugged, raw sound that apparently alienated a few corners of their fanbase last time out. Like I keep saying though, Death Magic’s really good, and represented a band not afraid to embrace a shift from hazy shoegaze and noise-rock into big, brash electronic clanks and white noise pop music. Now they can be found occupying a sound somewhere between machine gun chug riffage and the kind of concrete industrial tech-rock that you’d find soundtracking a club scene in Robocop (again, not a bad thing)

If there’s a critical bone to pick though, it’s that the whole thing, as mentioned before, sometimes suffers from a scattershot approach that leaves you grasping for something, anything, to hold onto, and if you’re not in the right frame of mind for an all-encompassing attack on the senses, it can leave you a little cold. Songs zoom in and out of frame, sometimes passing by without the slightest development or ideas unraveled, but perhaps that’s the point - HEALTH are not here to give you an easy time of it. Keep up! they scream as another few song-scraps fly pass by. It’s an oppressive, brutal mess.

Oddly enough, the limited sonic palette HEALTH work with both adds to the cohesion (if you can call it that) to the record, and also serves as a reminder that what they’re doing here isn’t so much ‘a lot with a little’, but more ’the same but different’. They really get into the minutiae of how to piece things together, and although similar synths and buzzsaw noise cut through each track, they’re having fun messing with it every five (or three for the most part) minutes: tangents upon tangents peel off, making songs not so much verse/ chorus/ verse, but some weird meta-hybrid of everything all at once - a sub-bass drop here, a blanket of washy synth noise there, thundering kicks all over this one, but a white noise blackout two seconds later. I keep thinking of that bit in Some Kind of Monster, the Metallica movie, where some poor guy is stuck trying to subtly nudge Lars Ulrich’s kick drums in Pro-Tools for hours on end.

Anyway, all said, Slaves of Fear isn’t perfect, but then I’m not sure it’s trying to be. It’s all over the place, but is also strangely connected. It’s good, just leave me alone now - I need a lie down.