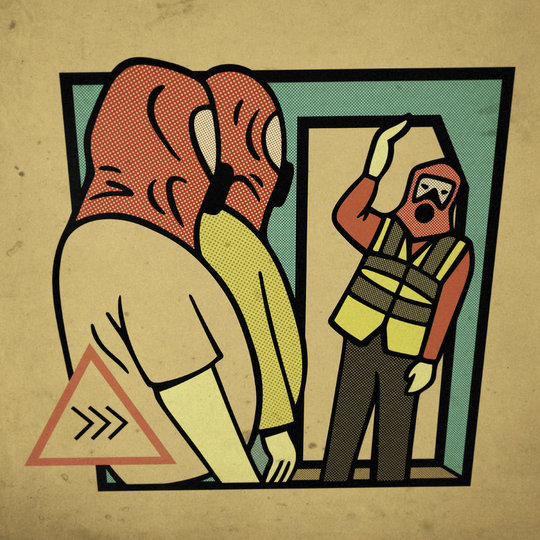 I can’t get no relief, doc. They say anxiety’s gonna take us all down, or at least that’s what the folks who hawk them blankets and spinners say. I spin my fidgety gizmo after every meal, I drink that organic lavender-chamomile tea stuff every night, I pop my Xannies every time the missus comes home. And at the break of dawn every day, it’s crawled back into my noggin again, like those tiny spiders they say crawl into our mouths when we sleep (that’s just a wives’ tale, right?). I don’t know what to do, doc.

My mate Pete said the old krautrock job’s gone to my head. Clocking in, clocking out, tripping on drums, dwelling in organ drone – that’ll do a man in, he said. He’s kidding, right? I mean, my old man hasn’t even touched a toothbrush for decades, and he’s still got all his pearly whites (well, more like smoky greys, but he’s got ‘em). I’ve had nothing but my BEAK> records for six years – no harm in that, eh? Geoff Barrow’s a good chum. And that old trip hop bunch he mucked around in the Portishead days dealt with the real hard narcs, I hear. These Bristol boys just fiddle with good, clean dread – well, not clean, I guess. Silver and apple-y, more like. Gives you that nice, tiny spine tingle when the world’s too bright for shadows to creep up on ya, you know?

Doctor, I’m at a loss. I thought this was an era for infinite possibilities, for unending inspiration, fool-proof get-rich schema. But for the past two weeks, I sit down at my computer, open a Word doc, and my fingers cease to dance. What do I feel? What do I feel, indeed. The very notion of sensation evaporates whenever I sit down to work. People laugh and cry and shout around me, and I can’t fathom how they tap those emotional reserves. The future contains only the same featureless fog as the present. All I can conjure is the slightest vexation, an annoyance as wispy as a newly-hatched spider (should those frighten me?).

Well, yes, I have listened to the new BEAK>. Incessantly, as a matter of fact. And I must say, the hallucinations that they promised on the tin haven’t spooked me as much as I’d like. Doctor, have you ever been disappointed by a dream? An apparition grants you the spouse that your subconscious always desired, and then the alarm screams and you’re alone, even though that whiff of ecstasy still lingers. The way I see it, >>> is not that vision, but the trace. Dated, doctor. A wavering shadow. They even acknowledge such with that Can-like trance, ‘Brean Down’ – who else would cite radio airplay as a measure of relevance, save for someone stuck in an archaic void?

Reviewed the prescription again. Can’t figure out if the medication’s working or not. The psychedelic aspects, such as ‘Harvester’, can trigger nostalgia in some patients, but lethargy seems to swing out of control in others. And the research still hasn’t determined if the Hawkwind miniature ‘King of the Castle’ has any desirable effect (I believe the term my colleagues settled on for that potential reaction was “camp as Christmas”).

If we look to the previous literature, we find that no components of >>> are particularly novel. ‘Abbots Leigh’ continues the ongoing horror motorik initiated in 2016’s soundtrack to Couple In A Hole; alternate folk relic ‘When We Fall’ was lifted directly from the 2015 interlude EP BEAK> <KAEB. Curious, indeed – three years ago, BEAK> presented that bittersweet refrain as their alterego, a mirror image isolated from their own. Now that we’ve cast aside the reflection, the mirror itself seems false, as if only another colleague were standing in the frame instead.

Quite peculiar. We’ll have to run more trials.