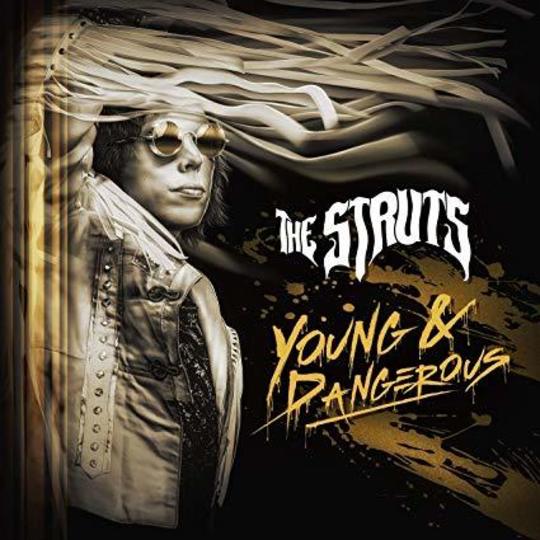 The general consensus between film reviewers is that recent Queen biopic Bohemian Rhapsody fails to capture the essence of the seminal British pomp-rockers. Fortunately, in the same week came Young & Dangerous from The Struts, which goes some way to doing just that. As their stylistic forefathers’ legacy is committed to film, the Derby lads continue to write the early chapters of their story with this second full-length release.

There’s no real mystique as to what The Struts are doing - unashamedly paying homage to Britain’s genre-defining prestige through a resuscitation of glam rock, their sound bursting with cocksure Stones grooves, Queen’s theatrical panache and T. Rex’s irreverent-but-ensnaring lyrical riddles. They’ve even previously invoked the subversive spirit of the Sex Pistols by recording a video on a Thames boat for hit ‘Could Have Been Me’ from their debut Everybody Wants.

Wearing influences on the sleeve has become something of a fashion trend in rock over the last few years. Several misty-eyed groups have hit the scene with a concept that’s unapologetically retro, be it their fuzzed-up, bluesy guitar licks or swinging hair and wide flares. Too many, however, have brought nothing to the table other than a complete lack of self-awareness and a penchant for turgid, unmerited dirges. The Struts are that rare breed - an act who are able to appropriate a retro stylee for their own advantage, using it as a springboard for their own ideas without falling into the overpopulated pit of glorified cover bands.

This approach has served them well over the past few years, particularly in the States, the quartet having moved there in 2015 after shaking up the US alternative rock chart. They’ve since enjoyed high-profile support slots and collaborations, as well as plaudits from famous faces - Mötley Crüe reportedly chose them to open their last-ever show in Los Angeles, while the Foo Fighters’ Dave Grohl dubbed them ‘the best opening band we’ve ever had’. Hell, Alice Cooper even made a cameo in the recent video for ‘Primadonna Like Me’.

That song is one of two singles that kickstart the album, a rasping celebration of the VIP lifestyle. Preceding that is ‘Body Talks’, which slithers in on a scuzzy riff before erupting into the kind of dirty glam-punk that Hanoi Rocks once dealt in, all finger clicks, howling and sneering. Ode to millennial narcissism ‘In Love With A Camera’, meanwhile, is the best song The Darkness never wrote, a slice of exuberant pop metal that stands as the album’s most joyous moment, brimming with falsetto hooks and thick guitar melodies.

It’s somewhat unfair to say Young & Dangerous has peaked by this point, but it’s definitely fired some of its biggest guns. While the ten songs that follow aren’t quite as arresting, there are still plenty of earworms to be found. There’s the twinkling power balladry of ‘Somebody New’, its warm, anthemic refrains a welcome change of pace, while on ‘Who Am I?’ they have a dalliance with disco. But it’s important to consider that earworms aren’t necessarily a good thing - who the fuck would want a worm burrowing into their ear? ‘I Do It So Well’, as much as it might rattle around your head afterwards, is unbearably smug and comes across as trashy, disposable chart fodder destined to be the soundtrack to a Vodafone advert, belying the bubblegum knowingness that shines in other tracks.

By way of a sign-off, they take ‘Body Talks’ from the top again, this time featuring another famous friend in the form of the often-awful Kesha. It’s not a radical departure for the pop starlet, who previously flirted with rock by guest starring on Alice Cooper’s Welcome 2 My Nightmare and having the Eagles of Death Metal appear on her own Rainbow album last year. This version is a working rendition - even if it’s of questionable necessity - but a duet with someone who’s sold tens of millions of records and boasts 3.6 million Twitter followers is good business sense on The Struts’ part, if nothing else.

Glam has so far proven cyclical. Following its Seventies heyday, it saw a resurgence after the punk era in which it was bastardised to stratospheric levels of success by the Hollywood bands, before grunge took a hammer to that metaphorical coffin nail. The Darkness then exhumed it for a mainstream audience in the early Noughties, subsequently aided by the likes of Foxy Shazam. While it appears to only catch public ears - and eyes - for short bursts at a time, we live in an era when we revere and revel in nostalgia perhaps more than ever, and The Struts are ahead of the game in seizing the opportunity to capture that unabashed magic for a new generation.