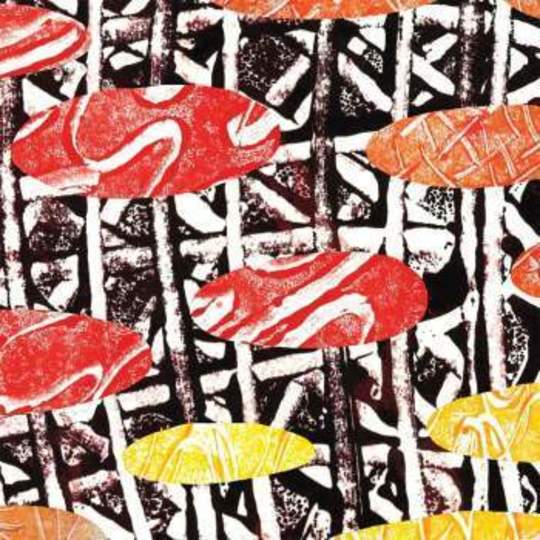 Modern life, it has to be said, often offers little scope for organic creativity. The current age gives scant regard to that which doesn’t offer immediate gratification. Meditative peace, tribal gathering, have become fetishised practice rather than natural human rhythms. Repeatable, predictable patterns are the norm.

Sequence, the second album from Nottingham duo Rattle, gives no heed to any of that but is ever-more elemental in their exploration of what can be made from the combination of percussion and voice. It’s an exploration which rewards richly.

Written facing each other over their respective kits, and recorded trying to capture the live sound to tape, each song is built around a different drum in Katharine Eira Brown’s set up. Across just four tracks Rattle build worlds, and destroy them, to rebuild again, in an album of constant movement that is more contemplative than reactive.

Opener ‘DJ’ is built around snare and shimmering cymbals - one of the elements Theresa Wrigley handles. It’s ominous, lurching forward before retreating and seemingly encircling the listener. As the track builds, percussive pace dropping into deep beats, it triggers that patience within and you realise you must give yourself and your time to this album before it will give its best bits up to you. It reflects your acceptance with gentle waves of wordless vocal, before bringing those building beats back and giving way to ‘Disco’.

An awkward and jagged beast at the start where voice is more immediate and prominent, drawing organic melody above almost mechanical rhythms. This is not a track with an easy feel, the voice may soar and soften but at times the drums - the focus now on the floor tom - sound resistant to the shapes they are being bent into.

The rack tom brings a warmer, rounded, tone to ‘Signal’ and the beat becomes more regular as the first true lyrics of the album are intoned. ”Put your ear to the ground, it’s an incredible sound” repeats, and repeats again, strengthening the sense of these tracks being drawn up into the light, of them having gestated in the dark earth before being conjured forth. Layered on, words over words, tone over tone, as the track pushes forward the vocal becomes more about instrumentation than verbal communication, the beat and percussion a push-pull of sound.

Final track ‘The Rocks’ calmly, almost dismissively, repeats ”More fool you” as the beat freeforms around the words, the bass drum felt as much as heard beyond the percussion. Layers are added, the pace picks up, the vocal wavers as the words are drawn out. And then suddenly, it is over. The beat stops on record although it goes on in your head, an external influence on your internal rhythms.

Overall a transitional album, each track a step on a journey as rewarding as the destination still to come. The build within each piece pushes forward the whole to show that far from being a limitation this drum and vocal combo are opening up new musical vistas rather than locking the listener into narrow focus.

If there were doubters after their debut that Rattle’s sparse set-up could continue to deliver without becoming monotonous Sequence should silence them. For the focused approach gives space not constraint to the music being made. It is not monotony but repetition, not sing-a-long surface but deeply-felt rhythms, shunning songwriting convention for more fertile ground.