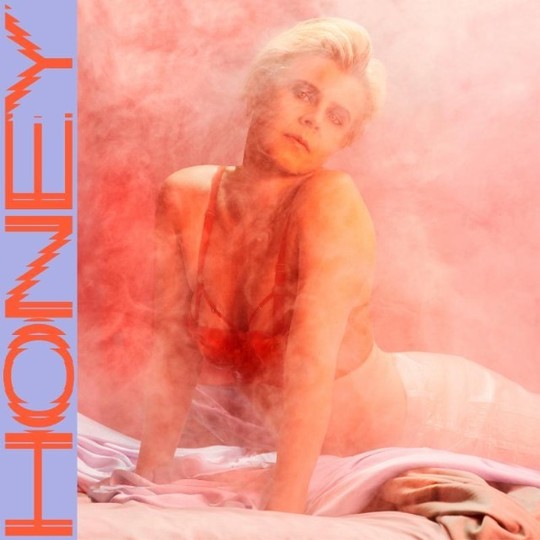 It has been a long and fraught journey, but Robyn arrives at her sixth full studio album as an A-List pop star. Those who followed her in the early days could barely have imagined that the leftfield, adventurous and brave pioneer of such tracks as ‘Electric’ and ‘Do You Know (What It Takes)’ would end up front and centre of the genre - sharing a mic with the likes of Neneh Cherry and Snoop Dogg. But having dazzled, amazed and euphorically swept the pop mainstream aside with the two parts of her Body Talk duology – a series of astonishing, brave and brilliant pop singles that somehow managed to branch multiple genres with a breathless ease – there is simultaneously a tremendous excitation and expectation on Honey to match its impact.

The truth of the matter is that it both does, and does not succeed in meeting these expectations. On one hand, Honey is an accomplished and intriguing record, whilst on the other, it never comes close to scaling the highest peaks of her back catalogue. The joys of the record are found in its consistency and flow. From track-to-track and beginning-to-end, the album plays out like a night out on the town to cure a torn heart – beginning with the glorious synth-shimmer-sorrow of lead single ‘Missing You’, the introspective, existential need for human connection displayed throughout the bleeding heart of ‘Human Being’ and the glistening and orchestral emotional recall found within the sensory stabs of ‘Because It’s in the Music’. The opening trio of songs almost serve to form a simultaneous prologue and epilogue to 2010’s astonishing ‘Dancing on my Own’ – Roybn encapsulating the idea of the inherent human need for contact, warmth, love and music; battling hard against the rocky shores of heartbreak. The best display of this is in the show-stopping maelstrom of ethereal pulses and kicks for the surface that comprise ‘Honey’ – a track both moving and galvanising in its emotive beauty.

The problem is however, that as beautiful and engaging as these tracks are, beyond these there are few times where you feel that Honey takes any meteoric steps forward – unusual for an artist of such talent and ambition. Roybn has always been at her best when compressing genres together – fusing dancehall and electro, pop and R’n’B and disparate elements. And if flaws present within Honey, it is the absence of this intermingling of flavours, often to the detriment of the overall picture. ‘Baby Forgive Me’ takes a beautiful, minimalist palate but is reluctant to leave base camp; the final half of the track spinning prettily, but emptily in space. Similarly, its conjoined twin – ‘Send to Robyn Immediately’ promises to explode into life but ultimately fail to deliver on the beautifully interwoven vocal lines and swirling clouds of synthesiser. There is much here to admire and to appreciate, but the middle section of the record – though consistent – often fails to fully engage in the way that so much of her previous work has done.

So how does Robyn address this? Basically, she decides to throw a party. From the opening of ‘Between the Lines’, the album suddenly flips itself and becomes a full-scale rave. Initially, it is hard to fully get the measure of. Is it indicative of trying to overcome sorrow (it needs to be said that Robyn herself has much of the record was inspired by a relationship breakup and the tragic death of long-term collaborator Christian Faulk) by simply dancing and trying to exhale the sadness in a cloud of steam and perspiration? Or is it simply counterbalancing the earlier introspection of the record? Either way, the Nineties Acid House groove of the aforementioned track and the minimalist Balearic techno of ‘Beach2k20’ are bizarrely and starkly juxtaposed against the first half of the record but strangely, as you listen the whole thing begins to coalesce. Whether intentional or accidental, the contrast seems to draw the album together as a whole and allows Robyn’s rebellious streak to finally come to the fore. Combined with the pulsing elastic groove of ‘Ever Again’, the album finishes on an incredibly strong run and ultimately resolves into a triumph – showing the unique ability of pop music to rescue itself from the stickiest situations.

Very few pop albums (The Visitors, Thriller, Like a Prayer) manage to maintain absolute brilliance and absolute consistency throughout. Most of the recent great pop albums contain a few astonishing high-points separated by album tracks of variable and wavering quality. Honey falls somewhere in the middle. At its best (‘Missing You’, ‘Honey’, ‘Ever Again’) it again shows the remarkable talent that Robyn has to harness the power of melody and the meeting of the past and future to create unique and immediate pop music. And whilst these songs are far from her finest work, the consistency of the record helps to secure their roots and stand them out more prominently. Honey is a fine record, a consistent record and a thoroughly enjoyable record. But it is not a great record, and in comparison with the standard she has set for herself previously, this is a mild (though fleeting) disappointment. That said, there is still a clear and beating heart here and the sheer humanity of Robyn’s musical soul remains one of the most beautiful things in contemporary music. With a bit of luck, Honey will sell millions of copies. But musically, it may serve more to open musical doors than create its own unique legacy.