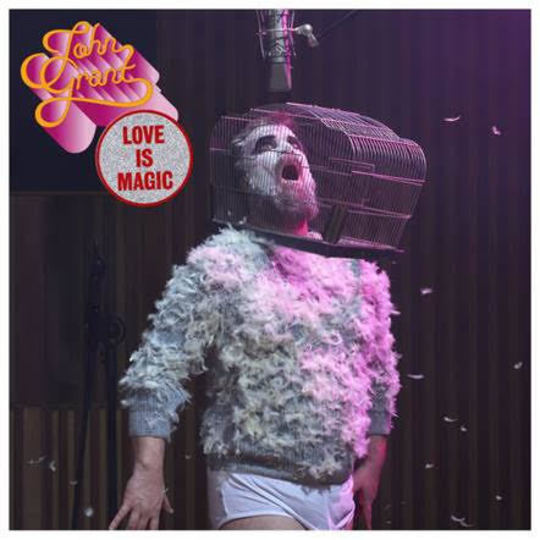 Let’s say, for a second, that your only impression of master balladeer John Grant is the cover of this album. You don’t know that this mountain of a man lives in Iceland, an ocean away from his homeland in the northern states. You don’t know either the Warren Zevon-esque, autumnal snark of his earlier days, nor the sneaky fingers stuffing electropop down the spine of each new record. And you certainly don’t know yet (not a stretch, this time) of the neon wiring fully integrated into this full length feature. All you’ve got is a nearly-naked guy covered in feathers, head in a cage, belting his heart out, with the asinine title Love is Magic stamped in the upper-left hand corner. Given no prior knowledge of the distance Grant has climbed to nail this shot, you’re going to stare at him and ask, ‘OK, is this a joke?’

Of course, anyone who only spares Grant a surface glance won’t ever hear the full line from which the album’s name stems: “love is magic / whether you like it or not.” That’s the chorus of the title track, where his tried-and-true songwriter mould perfected in The Czars takes the deep plunge into life after romance, and icy synths that evoke The Police. If you don’t listen carefully, you’ll miss that one of the darkest spots on the whole charade sits before “a dresser drawer which is devoid of clean underwear - it’s a clever game, where Grant both preserves and desiccates that clichéd ‘magic’ at the same time. Such is the triumph of the elder songwriter’s work, perched now on an electric plane of mirror ball strobes and totally Eighties aesthetics: Grant himself has moulted now into a sleek new phoenix, one that can giggle at life’s cruelest gags, even when the jest still stings.

Of course, if you’ve kept up with Grant at all, you’d know that fate has dealt him a miserable hand over the years. But that makes the high points of this album even funnier, really – how great is it, after all, that someone who’s wrestled with being openly gay can now write such a deliciously cheesy disco hit as ‘Preppy Boy’? How funny, too, that the song alludes to a heterosexual denying his fab side: "why you chasing that girl in the whale skirt…you know she’ll never understand”. Ditto for ‘He’s Got His Mother’s Hips’, a Peter Gabriel-esque pop blow-out about a cheeseball Don Juan; in both cases, Grant proves to be the real dream boat with his velvet slick delivery. Well, him, or whoever’s behind those suave walking bass lines.

As we’ve mentioned earlier, even the more classic, melancholy numbers seem shot through with diamond dust. ‘Tempest’ follows ‘Love is Magic’, with an even chillier disposition wrought from the dawn of OMD or the Human League. The protagonist’s desperate bid for company after years of rejection dissolves into a literal round of Tempest, another clever game, but this one an Atari arcade classic from 1981. Meanwhile, ‘The Common Snipe’ also harkens back to Grant’s classic form as he gives running commentary on a catalogue of birds. The kicker, of course, is that the most ordinary one of the bunch strikes him as the most beautiful, and ergo the one that keeps him up at night (not the only time this happens on the record, FYI). Both of those contain potent metaphors for life, I’m sure.

While part of Grant’s genius stems from those complex riddles, the more blunt songs aren’t bad, either. The piano ballad that rounds out the album, ‘Touch And Go’, salutes any queer or gender-fluid fellow coming out in this day and age; it’s fitting that a tiny flute lifts up at the end, as if to herald yet another album/life cycle. Concurrently, ‘Smug Cunt’ is Grant’s prerequisite anti-Trump anthem, conveyed with all the dignity and gravity that this current farce of a presidency oh so lacks. And while Grant doesn’t fire any novel shots at Mr. Tiny Hands, the Van Halen-sized synths certainly guide the blows with a satisfying squelch: “now you’re just a smug cunt / who doesn’t even do his own stunts.”

And yet, what with all these poignant cheers to gay identity (and clear flipped birds at incoming homophobes), the centrepiece and crown jewel of Love Is Magic is a seven-minute, robotic tirade called ‘Diet Gum’. Like the ridiculous cover and ostensibly lame title, you might also think Grant’s trolling you with this one, too. In a geeky teen impression that sounds like a pimply John Murphy, the bloke lays into his lover with a series of dorky insults: “do you even know what a collective noun is, stupid-zilla?” Grant might just be taking the piss here, but his impish spirit reflects a writer with his fingers on the pulse of what’s really magic in this era: an understanding of humanity and all its feathery mess.