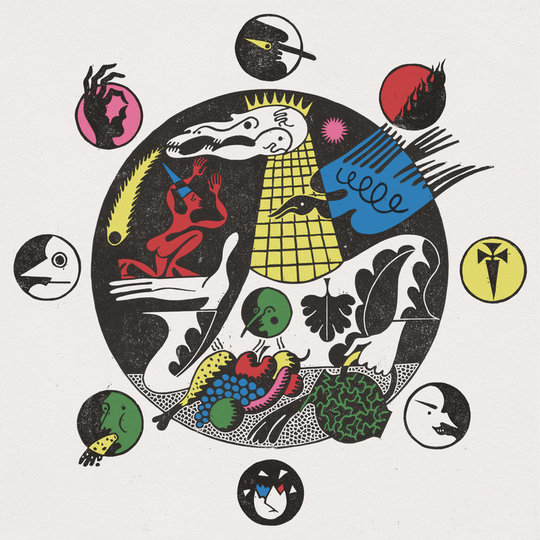 Well, aren’t we being spoiled? Only last year we were gifted the treat that was Feed the Rats from Newcastle’s porcine purveyors of quality heavy psych rock Pigs Pigs Pigs Pigs Pigs Pigs Pigs, and already another delectable feast is served. Whereas the gestation period for their first record was relatively lengthy, the making of King of Cowards was a speedier process. The band wrote the songs while touring in Italy, returning to the UK to record the album, and the new concentrated approach is certainly evident in the resulting material.

Although King of Cowards has double the amount of tracks of its predecessor, many are half the length of the two that bookend Feed the Rats. Anyone who's wary that this more streamlined approach could sacrifice the deep psych jams of yore can rest assured the band haven’t abandoned those leanings, they just come in undiluted form this time around. Although lead single ‘Cake of Light’ is certainly the most concise track, it mainlines everything that is thrilling about hard rock with “No remorse!” as vocalist Matt Baty sings. Their already explosive live shows will no doubt be further enriched by such pithy nuggets, not to mention the rest of the record’s more expansive offerings.

Opening track 'GNT' begins with echoey feedback before crashing riffs come in waves and a rabble-rousing chorus backs Baty’s roaring charge. All of which is paired with battering percussion, courtesy of ex-Gnod drummer Chris Morley, and scorching guitar solos that heighten the pitch. It’s an auspicious start, to say the least, and one that gives you eardrums a good kicking. This is rock music in all its glory.

The record may be a more focused effort, but Pigs have lost none of their psychedelic dexterity in the process: billowing tempos make for a trippy sense of time and slippery guitar lines trick the senses. A track like ‘Shockmaster’ rocks you gently into a false sense of security, then tears the rug from beneath. Lyrically it’s equally unpredictable - “Angels are easy to love… demons are easy to love” - blurring the ever-tricky defining lines of morality. On the other hand, ‘A66’ abandons sludgy rhythms for ravenous rapidity. An ominous midway break merely builds suspense for the cascade of heavy riffs and deliberate percussive thumps that follow. It builds to a dizzy apex matched by the immense capacity of Baty’s vocal.

King of Cowards is an album rich with detail, it’s a brassy racket that keeps on giving. ‘Thumbsucker’ forges a banging groove that the band stay true to aside from the snaking guitar that appears periodically, one of the many little features that make the record so mesmeric. Towards the end, Baty bellows the unlikely (and quite hilarious) line, “I LOVE YOU, MUMMY… I LIKE IT WHEN YOU RUB MY TUMMY AND LET ME SUCK MY THUMB.” Pigs may conjure a demonic din, but there’s something genuinely loveable and warm about their ruckus. That said, the deranged commotion of King of Cowards actually reduces you to a state of wanting to curl up in the foetal position and suck your thumb, so the jokes on us really.

The album plays with opposing forces, deals in oxymoronic language, explores notions of morality and guilt. Perhaps most importantly, the band has a deep and pleasing sense of the absurd - but then we knew that, why the hell else would you call your band Pigs Pigs Pigs Pigs Pigs Pigs Pigs?

By the time ‘Gloamer’ concludes the record with a fittingly epic sign off, and the suggestion to “eat your forbidden fruit,” King of Cowards confirms it’s Pigs that deserve to have their cake and eat it. But it’s also an open invitation to join in the overindulgence with a complete lack of contrition. To gorge on the fruits of their labour is to feel utterly replete, that said, I’m not one to turn down thirds. More more more more more more more!