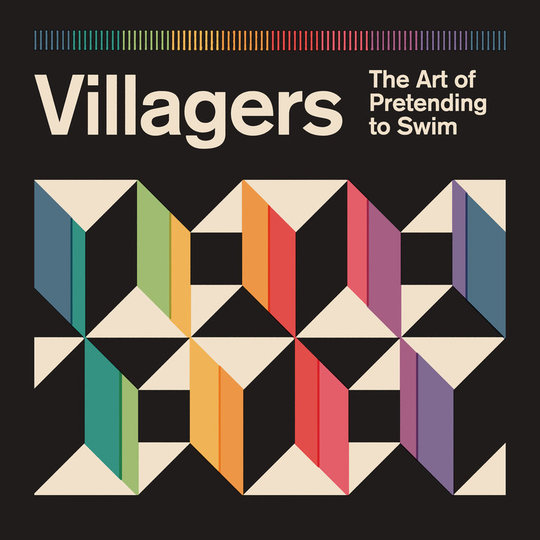 The Art of Pretending to Swim masters the difficult trick of doing what fans love an artist for, while subtly making creative strides in a new direction. There's the intricate fingerpicking, the intimate vocal, the forceful beats, the eeriness and honesty that Conor O'Brien has made Villagers' hallmarks – but it's atop hefty synths, peppy pop riffs and gloriously soulful bass lines.

There are points where the electronic layers turn into a cacophony of shrieks and interference – real chewing tin foil stuff. It's a credit to the production that the crescendo to moments like these after sections of acoustic sparsity doesn't feel forced. There's an intricate balance struck between analogue and digital, between raw confession and meticulously engineered sonic detail.

Faith is a recurrent yet inconsistent theme of The Art of Pretending to Swim; it's not an 'I have the answer now' album – rather, it poses and revels in the contradictions of belief systems. Without digging into O'Brien's views on faith, you do get the sense that questions of religion, transcendence and salvation have dogged him – or at least been integral to the creation of this album, even if he hasn't found the answers.

'Love Came With All That It Brings' focuses more on a feeling of sin that comes with romantic love than its traditional baggage - although there are some nods, "including the fact that it stings like a motherfucker". Given what else this track has discussed lies in store for our heroine – "Hell is a place that's reserved / For people it fully deserves / So she's packing her bags just in case / They've saved her her own special place" – the levity of this language, coupled with the jubilant gospel section that plays the song out, feel awkwardly celebratory.

'Sweet Saviour' is menacing from the off: sharp strumming with a choir faint in the background and sustained bass notes grounding it all. It paints a rich picture of a "woven tapestry of transcendental memory", and goes on to mix religious and sexual language: "Never did a soul touch a body so divine, / Never did a heart beat so fast it cleansed your mind". Even the chorus's plea is infused with illicit longing: "I've been praising you now for what feels like eternity / Sweet saviour, don't do this to me".

'Fool' describes "the promise of eternal life in heaven" as "a kind of anaesthetic for the journey" – a sort of deadened way to experience the world. It's here that O'Brien examines our relationship with technology, and how it affects human and romantic interactions. Watch the video and you'll see we're not doing well in his eyes – we're all addicted to checking our screens for nothing, and nowhere near focused enough on building out our knowledge, or forming meaningful connections.

These themes aside, the first two tracks set up the record beautifully: 'Again' is a feverish opener that typifies the digital/analogue balance – it should be too repetitive, but it's not. And second song 'Trick of the Light' grooves along with its addictive bass line, taking joy as much in the textures it creates as in the relief of relaxing into the unknown: "If I see a sign in the sky tonight / Nobody's gonna tell me it's a trick of the light / May never come but I'm willing to wait / What can I say? I'm a man of the faith".