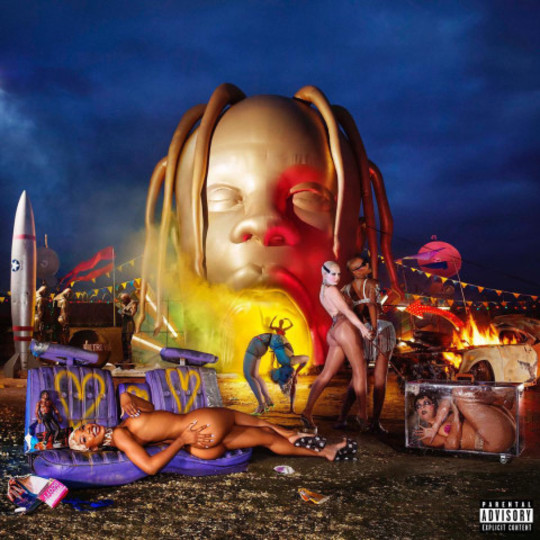 He was a gawky teenager from the Texas suburbs who flubbed interviews and wore snapbacks, but when Kanye West first saw Travis Scott's home-made video for his self-released single ‘Lights (Lovesick)’ he invited him to the studio to work on Cruel Summer immediately. A year later, the 2013 sloppy mescaline-trip mixtape Owl Pharaoh foreshadowed him as one of hip hop’s visionaries. And within four more years, he was riding a giant animatronic eagle through the air at arenas with a blazing stage presence that even his tour mate Kendrick Lamar faced difficulty following. His third studio album, Astroworld, feels like the grand opening of a vision that took a half-decade to perfect, still using the same psychedelic synth warps, diamond-cut drums, and reptilian hooks that initially skyrocketed him to stardom.

But even after having a child with Kylie Jenner this year, what crystallises Scott’s place in the culture is not stardom so much as fandom. Whether he’s self-releasing an action figure of himself or organising his own festival in a theme park, it’s clear his greatest priority is to give fans something to hold dear and true. That’s why if you attend any Travis Scott concert, you’ll see him haemorrhaging with the electricity of his future-punk hits as they collide with diehard fans. Each generation only produces a few live musicians that really find the power to ignite audiences at such a magnitude, and Scott is one of the very first to bring said magnitude to live hip hop.

To decode the brilliance of Astroworld in a greater world of seemingly similar pop-hop records requires an ear for subtlety. It’s the putrid 808 throb of 'Sicko Mode' and the nose-breaking bass swells on ‘Who? What!' which will leave mushroom clouds over venues across the world this year. It’s the balance of those head-bangers with the snake-charming lull of ‘Yosemite' or the easy-street bounce of 'Coffee Bean.’ It’s the beat switch midway through ‘Stargazing’ that, despite changing key and tempo, feels inexplicably perfect, like intergalactic channel surfing. It’s his hypnotic use of melodic semitones throughout the beaming Tame Impala–produced interlude, 'Skeletons.' It’s the chorus of '5% Tint' that carries the classic hip hop trope of peeking between the blinds with the barrel of a hand cannon, complete with a Diddy-esque saloon piano beat and a verse beginning with “Who the fuck is this?” in reference to Biggie’s 'Warning’ (take note of the importance of historical literacy, Lil Yachty).

Though traditional zealots of music will struggle to deny the strength of Astroworld’s songwriting and production, they will inevitably argue that the quality is owed more to his collaborators than Scott himself; indeed, there are many producers and guest features on all Scott’s albums. The subtext there would be that he is some fraud, finagling more talented people to make him appear a musical genius, as if anyone can whip up a phenomenal album as long as they’ve got money and power to do it. That's patently untrue; if it were, Tyga and Wiz Khalifa would have released classic albums this year, but they didn’t because they're missing the razor-sharp aesthetic vision that Travis Scott demonstrates with almost all of the sonic and visual content he releases.

‘Stop Trying to Be God’ is a key example of that vision in action, where Scott, James Blake, gospel singer Philip Bailey, the unmistakable moans of Kid Cudi, and Stevie Wonder’s harmonica come together. (Anyone in the industry knows that a musician’s ability to bring other great musicians together is an age-old art in itself, which explains why Scott also has Frank Ocean and Drake firing at their apex in the album’s top portion.) In a monotone that sounds unfazed by the prophets of music surrounding him, Scott radiates newfound maturity on the song, stepping up to bestow advice to fans on the dangers of egoism: “Fuck the money, never leave your people behind / It’s never love no matter what you try.” It’s a personal best for Scott, and James Blake delivers a bridge that may be his most breathtaking work since ‘Retrograde.’

It seems nowadays that in an instant, an artist’s public image will jump from humble wunderkind getting their big break to towering idol in need of dethroning. Critics have disparaged Scott's excellent debut album Rodeo for being more a product of lucky networking than artistry – but perhaps if they heard the independently-produced songs from his beginner stages, like 'Lights (Lovesick)', they’d be reminded that no matter how many contributors he enlists, the unique sound and experience is still wholly his own.