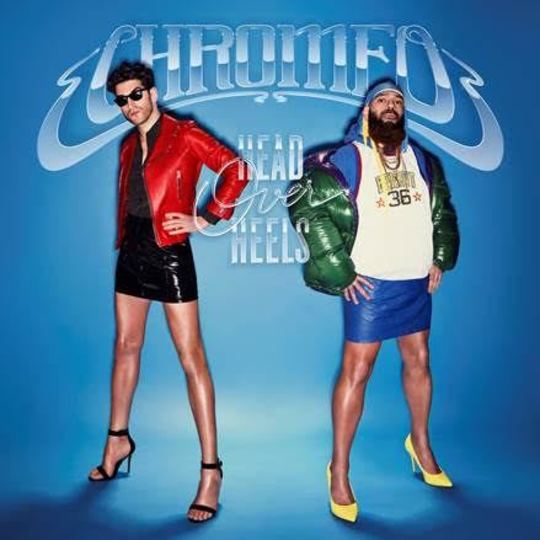 Let’s get real. What has been proven by ‘Uptown Funk’s ubiquitous reign as most streamed song of all time is that, in the years since the hey-day of the Purple One, we’ve absolutely cracked the formula for generic funk-by-numbers. Which is not to say that’s a bad thing. But in our post ‘Uptown Funk’ landscape, it’s a bold path for anyone to tread.

Can even Chromeo, kings of the electro-funk genre, navigate this minefield of a template? Will they push aside this forest of plastic wax moulds and offer up to the god of funk a retro-bounce sound adapted for the 2018 market?!

Our answer is a resounding “funk forever motherfuckers”. This is also the mantra that runs through the music, echoing in and out of tracks, an electronically manipulated low-budget demon horror voice-of-god to right us if we may have fallen by the wayside since their last release in 2014.

Head Over Heels holds nothing back in setting its scene with its title. Twelve slick songs, synth heavy, metallic-blue suit paired with a yellow shirt and ray-ban wayfarers. Its polished beats intersperse with soul vocals mastered so perfectly that not a crackle or inhale appears once on the record. We’re helped through twelve-stations-of-the-cross of a relationship, from first impressions to finally ordering post-coital room service in bed.

We begin with ‘Must’ve Been’. An anthem to something new, the epitome of the flutter and dive in your stomach when you can’t think about anything but you who you desire. It’s message “I must’ve been high when I met you” summons forth those times your mates teased you for fancying someone you swore you absolutely didn’t.

Head Over Heels takes us deep into those sex-dream sleepless nights, with the help of French Montana & Stefflon Don. ‘Don’t Sleep’s chorus will stick endlessly in your mind “But you’ve been sleeping on me…don’t sleep…don’t sleep on me…” and seamlessly orients the album right away, by use of the millennial trademark of conjoining words and dropping linking dialogue.

“You’ve been sleeping on me” instead of cheating on me or sleeping with others, out stretches out a hand to this generation. Come join the family. It’s okay. Chromeo say, you might not know much about funk, so let us show you the ropes.

Back to your not-girlfriend, at least you’re sleeping with her, right?! ‘One Track Mind’ breaks down the rules. “I got a one track mind and its taking up all my time”. It encapsulates monogonal longing, all you want is her for your own, but the silver bite of reality is she’s with someone else. Ouch.

‘Count Me Out’ is the sound of you, now you’re so done. “I’m still reaching out, he gets to touch you, you got me on the side”. It’s akin to electro-folk, almost euphoric, in its skin-bubbling joy. It’s true of course, there is some euphoria in the fuck it button – and ‘Count Me Out’ is the Masc version of Queen Bey’s ‘Hold Up’. It shatters glass with a manic smile on its face. FUCK. IT.

We sail through the rest of the courtship, with slick beats, electronic epiphanies, toe-tapper choruses. Somehow in the midst of all tis cool, the fuck-it button is disengaged. You end, in a fancy hotel room, her in your arms, ordering room service. How the hell did you get here??

Electro is sexy. That’s the truth. Maybe it’s the pounding beat you can keep time too when you fuck. Maybe it’s a more punk-rock reason – that free expression of sexuality was considered culturally verbatim at the synthesis of this genre in the Seventies and Eighties.

After all, we all know the most hard-core source of rebellion in this cruel world is to love your bad self, right?! But the dichotomy of this is that the older funky classics can be translate to misogyny in our zeitgeist. ‘What about her mind!”, we scream.

So, in a funk album that’s unapologetically about fucking, then you’d assume it’s par-for-the-course.

Yet, none of Head over Heels’ 12 songs come across as misogynistic. Quite the opposite. Chromeo present us with 12 chronicles of potential partner worship, of goddess devotion. There’s an equal male/female split of vocals, and the potential partner has a voice, and an unapologetic presence in the narrative.

“But I can’t tell you who to love” and “the minute that you tell me I’m allowed to, I’m gonna pick you up, and I’m gonna take you out” and “a boy like me, well I’ll give you the world if you give me the word”

One thing is true, the funk isn’t just a sound. Funk is a way of life. Funk is our way of energising our battery, plugging what we’ve lost back into mains power to recharge. Funk is slick, funk is cool, funk brings us all together. Funk-by-numbers has not yet had an update worth of Sly Stone; but in Head Over Heels, Chromeo have cracked it. They never miss a beat in updating it for 2018.