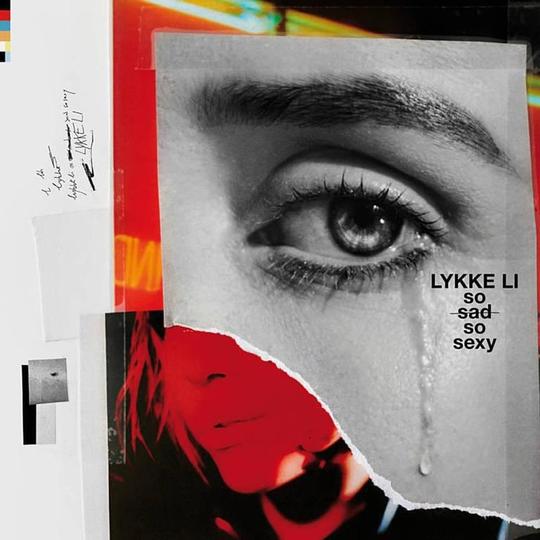 Praise be! Lykke Li is back! We start So Sad So Sexy, with promise. Opening bars drive forth a synthesised tone, over which operatic vocals are sewn. Li opens the floodgates, invites us to sail our sea-boat. “If you like the feeling of the hard rain falling, I have a sea full I can give you an ocean.” We miss her, of course, so we throw up our sails, draw in our anchor and we’re ready to speed. Familiar bars of our own anticipation breathe like the ocean air at the start; and soon cuts in a call and response…

This carves Li out her membership to the Sad Girl’s Club from the get-go; and sets the scene for her newest release – So Sad, So Sexy. As the music grows it lets us know some rabid change is about to jump aboard. A sub-base beat emerges from the darkest depths of the ocean…then…then…

What we see quickly, is that Lykke Li is so done with the twee indie-pop that’s defined her career to this point. Gone is the stripped back, alt-clap halting vibe. Gone is the candyfloss bounce in her voice. Gone, for the most part, is the quintessential Li-reverb. It’s a move away from her expected sound, underlined in part by the face her YouTube channel contains no trace of her previous albums. Is this new vibe, we wonder, in part influenced by partner, revered hip-hop and rap producer Jeff Bhasker? How in holy hell do you jump from Swedish Queen of weird, to sleek R&B hip-hop diva in four years?!

And what do we have instead?!

Instead, Li powers her voice with an erotically-charged electronic depression that lurks beneath the surface of today’s youth. The same nihilistic-sadness that lives at the bottom of dank memes and Facebook groups that exist with the pure purpose of being twentysomething’s tags in comment sections. One thing is for sure, Li has grown up, and between 2014’s I Never Learn and today’s So Sad So Sexy; it would be fair to say that Saturn’s Return has hit the pop-star hard. She’s had a baby. She’s become a hard-core devotee of Transcendental Meditation. She’s shacked up with a lover, presumably settled down to nurture new life in the world. Put simply, it seems she’s moved from a girl to an adult, and So Sad So Sexy is the equivalent of Li sub-tweeting her ex. It’s a look back at a life well lived, rather than a record about the ache when you’re inside it.

Taken separately, each track resonates with that hip vibe you’d always felt like the American Apparel staff had and you didn’t. It’s emotionally charged, thick and heavy with layers – cemented one on top of the other with haste. Her lyrics still hold the beauty of her indie-pop reign. “I’m better alone than lonely here with you” and “let me keep the last piece of my heart, before you tear it all apart”, and cautionary tales such as “drink up drink up I’m so fucked up” bring us back to her heart, and the elements on their own have the potential to overwhelm and delight.

But as a sum of its parts, So Sad So Sexy quickly switches your brain off. When you rope in so many big names, Scrillex, Frank Ocean, T-Minus – the result has a potential to ring beautiful. However, here you can’t help but imagine a check-list on the dashboard of the mixing desk that lists all the best hip-hop and R&B effects. Chose one, and tick it off, and by the end you’ll find that no line is left without a check. There’s a huge drop into sub-base that makes your glassware shake. There’s the slightly-out-of-time call and response with a heavily filtered electronic male voice. There’s high notes interspersed with beats, real proper beats, that flail in for a few bars then disappear. There’s a vocoder that rocks up once and vanishes. If Li was a Pokémon collector So Sad So Sexy would have caught ‘em all, but alas – this is music; and the truth is Li should really leave the hip-hop influences too Janelle Monae and Lorde.