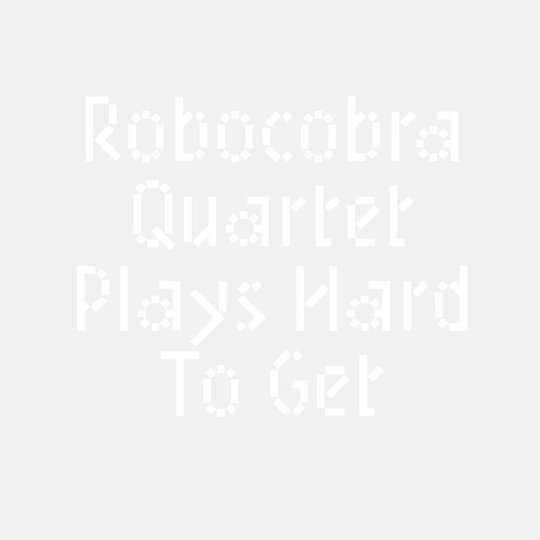 Robocobra Quartet exist in liminal space. A perpetually in flux blend of Touch & Go/Dischord-era post-hardcore sits alongside minimal contemporary classical & jazz, very little about what they do should work, and beyond the product of Nineties Louisville weirdness, Rachel’s, there’s little precedent for it. The wrong hands would ham-fist it together into an incongruent mess, riddled with either cliché or impenetrable, directionless meandering. Formed in the small avant-garde hub of Belfast’s Sonic Arts Research Centre, they’re certainly not naïve enough to be considered outsider, nor does some overarching visual conceit play enough of a role to be considered art rock. Die-hard punks would reject them for their composition, while the precedence of spoken word vocals and their adherence to pop convention keeps them out of all but the most liberal jazz club.

There’s a moment 40 seconds into Plays Hard To Get, as an ornate Hollywood string section unfurls, where it becomes evident that the Robocobra Quartet heard on this album has underwent substantial evolution since their 2016 debut. “Following loose threads, we spend our teens brushing the dust off brick to uncover some hidden hieroglyphic”, Chris Ryan enunciates, in the first of many punctuation marks in a lengthy dialogue between himself in the present moment, past self, inner monologue and contemporary culture. At the 52-second mark, the pulsing stomp of ‘Short Stretch of Day’ broadens the panorama into the theme for an all-encompassing Adam Curtis-directed blockbuster rumination on humanity. 'I was just trying to write a pop song', Ryan has said of it – true, in a sweeping, orchestral Talk Talk sense.

Plays Hard To Get necessitates active listening - few ears will react with passivity to a frontman whose over-enunciated search for truth is as influenced by the curated spontaneity of Stewart Lee’s cadence as it is the Dismemberment Plan’s Travis Morrison. Just as an infatuation with the mind of Mark E. Smith is to appreciating The Fall, so too is drummer, vocalist, and primary composer Chris Ryan’s worldview to Robocobra Quartet. An internal anxiety-symptom checklist, its wandering existential extrapolations often opt to twist the knife rather than indulge in romantic, poetic inclinations that usually accompanies the same feeling on, say, a Nick Cave record.

Despite that, it’s kept afloat by enough musical buoyancy to offer respite, as we’re dragged by Ryan on some Quantum Leap arc across zeitgeist snapshots, characters and ciphers (“crack that goal for 1860 Munich”, “Hands on rails/In a regional hospital somewhere”), that incrementally fill in our view of the bigger picture here. A panache for these evocative cultural touchstones and what Chris Morris would call ‘magic words’ disarm, before we’re floored with broad truths (“We’ll find a better use for that unused noose”, “I’m three times the person I used to be, but twice as unsure”).

‘You’ll Wade’ and ‘Try Hard’ work as spiritual heirs to to the previous album’s ‘You’ll Shrug’ and ‘Nice Life’, their comment on the unbearable weight of emotional and artistic baggage, the pitfalls of over-reliance, and self-prescribed debts to others, as experienced by today’s adult children - “Hell hath no fury like a scorned hopeful” indeed. As with many of the album’s rock-oriented moments, they’re underpinned via the Fugazian technique of employing bass as hook-laden rhythm guitar, loosely but measuredly introducing flourishes of modern classical instrumentation.

Everything on here is transtextual, but for what purpose beyond some indulgent self-constructed artistry? Robocobra Quartet explore the extent to which life can be mined for painstaking, autobiographical art. Both can be a fucking slog, but for those moments of complete, escapist wonder and a fleeting sense of understanding. Whether they arrive with little prescience or crushing inevitability, some uncomfortable truths signposting the way, Robocobra manage it in their measuredly spontaneous moments of humanity.

Sometimes those moments arrive in the concession of just one vocal line to melody, or in a moment of outright doom when the clickbait-satisfying bar of ‘Bar 37 Will Shock You!’ arrives, and along with it the cold sweat of that moment of sheer dread upon the crushing realisation that the yearning you feel for those salad days won’t ever be satisfied. Where the band often deliver maxim upon maxim of self-reflection and flagellation, Ryan’s ongoing fascination with pop culture idiom (“It’s been a while since liquid on airlines”) offer another reading that ultimately prods at a broader collective mindset, and it’s here where the heart of Robocobra Quartet’s craft lies.

It’s weighty, but in turning its gaze outward and recognition of the power of silence and breathing space for its ensemble, Plays Hard To Get feels leaner and more cohesive than its predecessor, despite a substantially longer runtime. An album that expertly plays on expectation, playing the dynamic long-game and intentionally weaves knots into its tapestraic narrative, Plays Hard To Get is the most daring, fully realised LP to emerge from Ireland this year, and it’s hard to imagine it being topped.