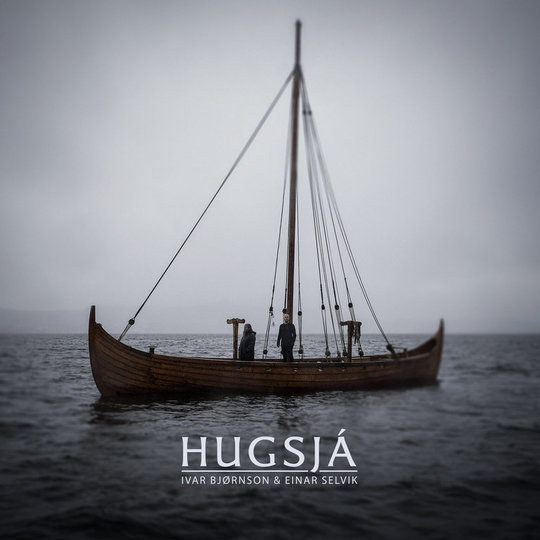 Even if their names rarely appear in the mainstream, Enslaved’s Ivar Bjørnson and Wardruna’s Einar Selvik are Norse musical royalty, which largely explains why they were commissioned to work together to create music in commemoration of the two-hundredth anniversary of the Norwegian constitution in 2014. The results were released in 2016 as Skuggsjá, a record that provided something of a meeting point between its creators chief projects (albeit with a clear skew towards the Norwegian folk composition of Wardruna rather than the progressive metal of Enslaved).

Now Bjørnson and Selvik are back with Hugsjá, a successor album that neatly avoids feeling like a retread. The risk with projects that emerge out of commissions is that, once the initial impetus provided by the brief disappears, the results can easily become uninspired. Here Bjørnson and Selvik have actually delivered a sophomore suite – initially composed for the Bergen International Festival last year – that is comfortably superior to its predecessor. With the focus this time on providing a sonic journey around Norway’s coastal regions, the duo are in their element. Hugsjá is a startlingly atmospheric journey that uses Norwegian folklore to enhance a collection of stunning songs.

The opening, titular, track is an easy highlight, swooping as it does out of the clouds with gentle guitar, stirring strings and Selvik’s evocative vocals. It’s followed by ‘WulthuR’, which is driven by some wonderful, faintly jazz oriented, percussion. ‘Ni Døtre av Hav’ then sees Bjørnson threaten to break into metal territory for the first time, only to climax in a beautiful, soaring folk arrangement that is as powerful as anything present on the entire album. The opening quartet is rounded off by ‘Ni Mødre av Sol’, which is dominated by the most haunting melody Bjørnson and Selvik have yet crafted together. These opening four tracks might be the record’s best, but more than anything they set the tone for a record that rarely comes close to losing its direction or inspiration.

That said, Hugsjá is lengthy. At 63 minutes, this is a record that perhaps lacks the musical range to match its duration. It’s worth repeating that there isn’t a single track here that stands out as particularly flawed, but as on Skuggsjá Bjørnson and Selvik could be accused of not having realised that one can have too much of a good thing. The progressive rock flourishes that underpin ’Nattseglar’ and ’Oska’ keep things moving along nicely, but the likes of ’Nordvegen’ and ’Utsyn’ defintely suffer a little simply from arriving towards the back end of an hour long record. Even if the length does not detract from Hugsjá’s overall quality then, it does perhaps undermine it just a touch.

The word “Hugsjá” means to see with the mind, and this record certainly fulfils any ambitions the listener might have in this area. It’s hard to listen to the quietly grandiose music on offer here and not find oneself mentally transported on to the titanic Norwegian cliffs. In that sense, Bjørnson and Selvik could scarcely be doing a better job of showcasing – and reworking – the folkloric traditions of their homeland.