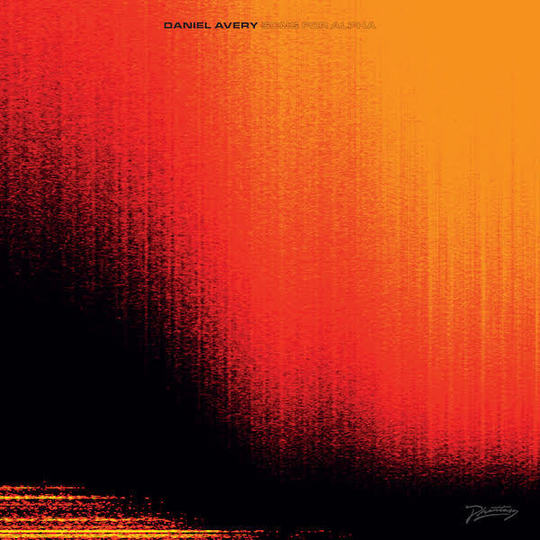 In coming to do this review, I had one of those really nasty colds you get when you’ve sat on an aeroplane for a little bit too long, and the recycled air has gone round and around, throwing germs at you until your face feels like it’s about to explode. Anyway, before I sat down with Song for Alpha, I’d actually been listening to a bunch of Boards of Canada albums, as that was the only music that seemed to be able to make me feel a little less horrible, and as it turns out, I’m pretty sure Daniel Avery has done the same thing, as when ‘First Light’, the ambient little intro which kicks off the album comes on, I mistook it for a long lost Boards of Canada tune in my half-asleep state and just assumed my iTunes had just kept on playing their stuff at me.

It’s no bad thing to be perfectly honest, and it sets up a record very much indebted to the early Warp stalwarts. The hypnotic textures of BoC, the jittering slow motion techno of Aphex’s Selected Ambient Works, and even the more out there drunken synth melodies of LFO and early Autechre all seemingly play a part on Song For Alpha, and it’s to Avery’s credit that he’s managed to take those elements and make them sound so refreshing 20-plus years later.

Avery’s last record, the arpeggiated hardware techno-fest of Drone Logic was a massive hit, and put him at the forefront of the burgeoning modular synth tech thing that has grown ever since. Five years later, and we’re still inundated with kids spending humongous amounts of properly technical modules just to make artificial wind noise. Anyway, I digress. Basically, that record was huge, and cemented Daniel Avery to a very particular sound, one which he only briefly revisits on his follow up.

For the most part, he does away with the tight, hands-in-the-air modular euphoria of Drone Logic, and slowly introduces a more mature, considered approach. Not so much minimal, but doing more with less- slowing things down, letting things run, and not so concerned with big room techno stompers. Albums in techno are always a tricky thing to get right, and it’s a relief to know that he more-or-less gets it bang on with Song for Alpha, melding languid acid house tracks like ‘Stereo L’ to a bevy of gnarled synth interludes and segues, ‘Citizen // Nowhere’ being the best of them. There’s also a gargantuan amount of Blade Runner-esque reverb on everything, which as a fan of both Blade Runner and reverb, I think works especially well.

Then we have stuff like ’Projector’s dreamy Aphex-isms, sitting next to stuff like ‘Diminuendo’, with all it’s racing techno heat, working as two sides to the same coin: summery euphoria vs. paranoid darkness. It’s a trick he uses more than once, but to stunning effect: the dark and the light, the ups and downs, twisting the myriad emotions you can squeeze out of various bits of bleeping hardware.

‘Sensation’ and ‘Clear’ trade in that scorched ambient synth texture that’s de rigueur for electronic music bods to admit to being totally into these days, but whereas most use it to unleash wave after wave of noisy nothingness, Avery melds it with big Space Echo’d clanks, and turns it towards the dancefloor and says ‘go on then, there you go - have a dance to that’. Which, you know, you have to say fair play.

There aren’t that many big room bangers present, which is great, as I’m sure Avery could’ve easily just knocked out Drone Logic v.2 at any given point and made a load of cash in doing so, but it definitely feels like Song for Alpha has benefited from a prolonged gestation - at no point did I think 'oh yeah, he’s just gone through the Beatport top 10 looking for trendy things to throw in', there’s no dubstep wobble, no EDM drop and no endless modular jam either.

‘Slow Fade’, one of the album highlights, swamped in that Blade Runner reverb again, slowly twisting and turning until it peters out, would’ve actually made a better ending to the album, as the few extra tracks that follow don’t really do much apart from bloat the run time, which is my only gripe with the record, really. That aside though (and what it lacks in depth, it more than makes up for in atmosphere) it’s an intriguing look at a talented producer carving his own path, and making dancefloors a little bit weirder.