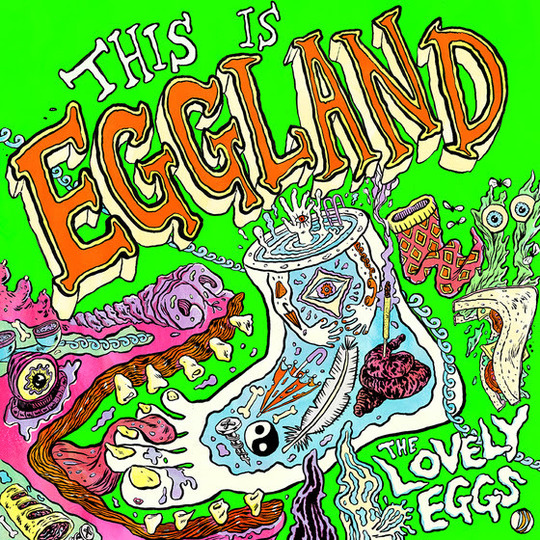 It’s a hard life when you’re cursed with a sense of humour. Witty lyrics and entertaining stage banter can take you a long way, but they can also be a barrier, pigeon-holing artists into novelty brackets they long ago outgrew. Toy Dolls never got past ‘Nellie The Elephant’, there’s more to Half Man Half Biscuit than ‘Joy Division Oven Gloves’ and Lancaster’s Lovely Eggs have always struggled with the legacy of their 2007 debut, ‘Have You Ever Heard a Digital Accordion’, a funny, original calling-card which ended up being something of a millstone. Judging Lovely Eggs on ‘Digital Accordion’ is like judging Radiohead on ‘Anyone Can Play Guitar’, or Jeremy Corbyn on his O-Level course work, yet a few still dismiss them as 'that funny Northern band'.

You dismiss Lovely Eggs as novelty at your peril because as much fun as they can be, there is a ton of richness, heft and attitude to be found in their work. The duo’s sound has toughened, their edge has sharpened and their approach has streamlined as they’ve become more and more the most perfect version of themselves. This Is Eggland, their fifth album, is maybe the best example so far of the band they could be.

Firstly this is a heavy record; a virtually non-stop cascade of whirligig fuzz courtesy of Holly Ross’s Big Muff pedal and the churning thud of David Blackwell’s propeller drums. It’s an album that slams. Secondly it’s a work of real economy - where some write essays and jam out lengthy solos, Lovely Eggs have pulverised their sound down to lyrical and musical sloganeering. “I shouldn’t have said that! It was evil of me!” yells Ross over and over again on ‘I Shouldn’t Have Said That’, as she digs her plectrum into a two chord riff with Blackwell playing like he’s being fined a tenner every time he hits the toms. ‘I’m With You’ takes 20 seconds to find a second chord and it never gets to a third. In lesser hands such primitivism could feel inelegant and worse, boring. Lovely Eggs make it completely exhilarating. They wield their sound like a lemonade sledgehammer.

The joy in This Is Eggland isn’t just in its paired-down thump. Equally as important is the warmth embedded under the layers of sound. Anyone can say “fuck you” with a punk song, it takes something quite special to layer real charm into the noise. ‘Big Sea’ celebrates a beautiful ordinaryness under its burbling synths, ‘I’m With You’ flys the flag for community-through-outsiderdom, and even the none-more-blunt ‘Dickhead’ and ‘Would You Fuck’ feel like they’re kicking against bitterness rather than leaning into it.

In producer David Fridman, whose psychedelic instincts have added glow to everything from Flaming Lips and Mercury Rev to Creaming Jesus, MGMT and Sleater Kinney, Lovely Eggs have found a collaborator who understands that warmth, weirdness and wit can be melted into walls of queasy noise to quite gorgeous effect. Between them they’ve made something genuinely glorious. There’s nothing funny about that.