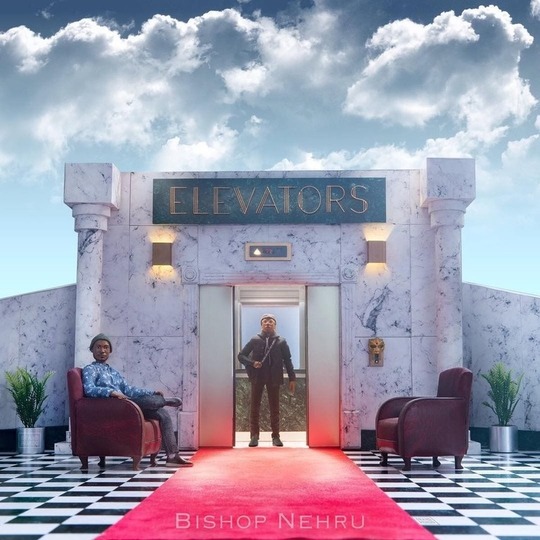 'This is my attempt at a rap Pet Sounds,' says 21-year-old rapper Bishop Nehru. That is one heck of a bold concept for a debut album. The Beach Boys’ 1966 magnum opus is a record that combined elements of pop, jazz, classical, the avant-garde and exotica together in ways that made it one of the most innovative and influential albums of all time. It’s even been preserved in the National Recording Registry by the Library of Congress for its cultural significance.

While it might be easy to balk at Bishop Nehru's grandiose aspiration, the vision for his first proper full-length isn’t completely pie in the sky. He marked himself out at 16 with two mixtapes before supporting Wu-Tang Clan, Earl Sweatshirt and Joey Bada$$ on tour, and he’s been endorsed by both Nas and Kendrick Lamar. Notably, he also crafted a collaborative album with MF DOOM in 2014 under the name NehruvianDOOM.

Bishop’s desire to produce a rap Pet Sounds isn’t the only intriguing idea underpinning Elevators though. If its title didn’t already give the game away, this is a concept album comprised of two parts: Ascension and Free Falling. This proclaims a grand parable, an Icarus-like narrative about complacency and hubris. To introduce these epic themes with parallels to Greek mythology, Bishop chooses to commence each section with short overtures. This seems like a solid idea on paper, except that they’re not heralded by some sweeping orchestral movement, but by a melody that sounds more akin to the tones a tannoy makes at a station just before you’re told the 08:14 to Wolverhampton has been delayed. Bishop was probably going for more of a nudge-nudge wink-wink reference to actual elevator muzak here, but it serves more to disrupt the flow of the album; the percussive clatter that kicks off ‘Tasers’ should have been enough to signal this shift halfway through the album.

Stepping away from this slightly distracting structuring technique though, Bishop’s verses are delivered with bite and free-flowing intensity that conveys a sense of urgency, and he does indeed drop some deliciously subtle metaphors throughout the album. One of the most intriguing of these comes on closer ‘Rooftops’, a track that symbolises the fall of the Titans, where he says “I’m infinite like unsigned Eminem”, referencing Marshall Mathers’ own debut album from 1996; seen in the context of the song’s theme, it’s an unusually cutting line. On ‘Game of Life’ he also meditates greatly on the transient nature of our existence (“he started to live just as his was ending”), with its hook declaring that you’re given “no time to prepare to fight.” At other times, he reflects on battling through the struggles that life can bring (“I been through a lot/ Still I ain’t show tears”) and searching for alternatives to the status quo (“I’ve been thinkin’ bigger/ Tryin’ to see a better way”).

Sometimes though, his rhymes and bars just aren’t quite as engaging as they were perhaps initially intended. There are times in the record’s first half in particular where Bishop shrugs off criticism and displays some of the hubris that eventually led to Icarus’ demise. This works in the context of the album as a whole, but the lyrics sometimes lack the weight to carry off such a hefty theme. As a result, these statements can come across more like flexing than a coded comment on having pride before a fall, especially when some of these sentiments are repeated: “Focused all the time/ I don’t really mind if you hate”, “I’m living royal”, “I can’t fumble”. He contemporises mythology, but sometimes in unsubtle ways.

Bishop’s attempt at telling a narrative of two halves also bleeds into his choice of producers for the album; he’s chosen just two with Elevators: Act I & II. He continues his master-and-protégé relationship by teaming up with MF DOOM, but also enlists the aid of Canadian Polaris Prize winner Kaytranada. The decision to work with them for this bold undertaking is kind of inspired in theory. Bishop had already established himself across the top of DOOM’s soul-jazz fusions and drum punches. Kaytranada, meanwhile, proved that he was similarly allergic to genre with his own debut, 99.9%, mixing in percussion-driven and often complex rhythms with a penchant for grabbing elements from funk, soul, R&B and house music.

Though it’s unclear how much Kaytranada and MF DOOM interacted during the making of Elevators, they manage to piece together a relatively cohesive tone throughout the album while still differentiating themselves musically. At least, to some extent. Kaytranada’s slightly clipped beats and fuzzy ambience run through the opening tracks, and he still manages to play with genre too. He infuses ‘Driftin’ with airy and fluttering woodwind elements while the twanging guitars and tropical piano melodies of ‘Game of Life’ border being full-on bossa nova. ‘Up Up And Away’ is the most ascendant track on the collection, bolstered by jazzy inflections, marginally warped string sweeps, a soaring hook courtesy of Lion Babe and even a squalling guitar solo at its climax.

MF DOOM effectively picks up the baton on Free Falling, running with some of the ideas that Kaytranada establishes on Ascension. Despite the shift in theme, there’s only a very marginal tonal distinction here; ‘Free Falling’ isn’t a sudden dark tumble into the abyss. That doesn’t mean that some of DOOM’s more experimental touches aren’t present here. Indeed, there are little details here (the chirping birds on ‘Tasers’, the rollicking drum beats and bursts of brass that blast away the languid, intricate guitar on ‘Again and Again’, the occasional jackhammer rhythms of ‘Potassium’) that mark his style out from his Canadian counterpart but there are still moments where it feels like he’s cruising on auto-pilot.

Though it’s intriguing in places, Elevators: Act I & II isn’t in fact the rap version of Pet Sounds. Then again, he only said that he had set out to 'attempt' that monumental feat. As such, this is a debut that showcases a rapper reaching for greater heights, attempting to push his own boundaries with some genre-bending foundations. Unfortunately, it lacks that killer, epic punch that such a lofty concept should garner.