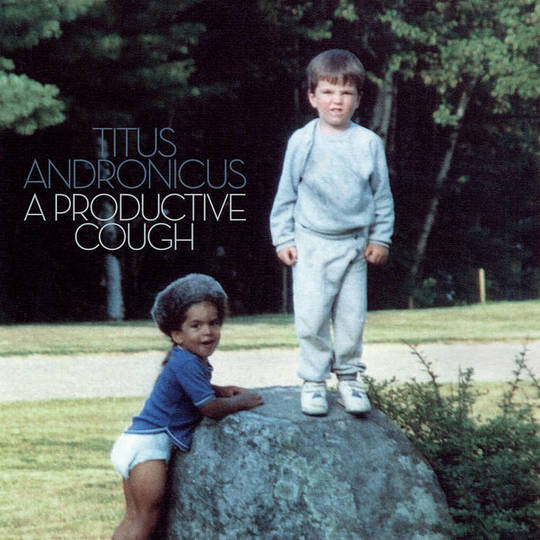 With every act attempting to outdo the 'bigness' of the last, excess is an increasingly meaningless concept in this day and age. But Titus Andronicus take what's left of it to new heights. As if their affinity for inventive vocabulary and stadium punk rock wasn’t enough, in 2015 they released the 29-track, three-disc rock opera The Most Lamentable Tragedy. But in spite of their naked ambition, A Productive Cough is arguably their most accessible listen, inviting fans both new and old to revel in the fucked up commonalities of the everyman.

Frontman Patrick Stickles goes beyond the point of mere confession in regards to his mental issues - he indulges them at every turn, commonly making spectacles out of them. A Productive Cough reads like one severe panic attack set to music. Unlike a lot of bands, where the backing musicians either intentionally or unintentionally act as mere vessels for the ideology of the frontman, all the players of Titus Andronicus let their personalities shine through. But in keeping with their theatrical aspirations, a slew of other musicians were brought in to collaborate on A Productive Cough, including esteemed cellist Jane Scarpantoni (Lou Reed, R.E.M.) and pianist Rick Steph (Hank Williams Jr., Catpower).

Steph’s syrupy piano guides 'Number One (In New York)', as Stickles gradually builds to a voice of abrasion. But interwoven in the breathless wailing is a poetic indictment of postmodern pandemonium, almost like a tempered, modern take on The Clash’s 'Lost in the Supermarket' with a Bowie-esque eye for detaill. Stickles is perennially uncomfortable in an invasive world, and his vague longings to define himself are all but ineffectual.

Past Titus Adronicus releases have married their punk roots with their more traditional rock leanings, but amid the lyrical neurosis, A Productive Cough sounds like clever homage at times. On 'Real Talk' there is an amalgam of soul and country-honk blues, similar in scope to the Rolling Stones circa their Let it Bleed through Exile on Mainstreet period. The musicianship helps to personify this 19th nervous breakdown feeling while the lyrics smack of a dystopian view of the present. But in spite of the hysteria, Stickles seems to be toasting to the hopelessness of it all, as if he is comfortably numb in his awareness of his own inadequacy.

What’s interesting about A Productive Cough is how accessible it is compared with the band’s past work. 'Above the Bodega (Local Business)' is one of the most palatable songs in their entire library in both tone and sonic reach. Literally commenting on the utter transparency of our times, where privacy is mainly a bygone luxury, Stickles and company are also harbouring a transparent sound. As he struggles to convey an image of perfection to the world, the local convenience store clerk knows all of his true vices. There is simultaneously a degree of frustration and tranquil resignation in his voice.

All of the songs have an intended vastness about them, like modern mini anthems in their own right. Megg Farrell sings vocals on the lush 'A Crass Tattoo', once again echoing that contemporary feeling of being engulfed in a culture war. Stickles then provides a raucous cover of Bob Dylan’s 'Like A Rolling Stone', where he looks inward and addresses the song to himself in a terse monologue. Even though it is one of the best renditions of the song to date, nestled between the rest of the album’s odes to modern angst, it is a bit on the nose for a band that likes to revel in audacious undertakings.

'Home Alone' and 'Mass Transit Madness (Goin’ Loco)' are both fitting conclusions to a thematically dense and deeply gratifying album. Sparse on the witty poetics he usually employs, 'Home Alone' has an ominous feel - Stickles seems to be concurrently celebrating and wallowing in his loneliness. Through all of the bleak scenarios littered throughout A Productive Cough, Stickles is adamant that life will ultimately reward those who persevere: As he sings on the last track of the album, “making my days go away one by one ain't my idea of fun/ But I take as it comes/ And the scrape of the trains breaking wakes up the sun.”