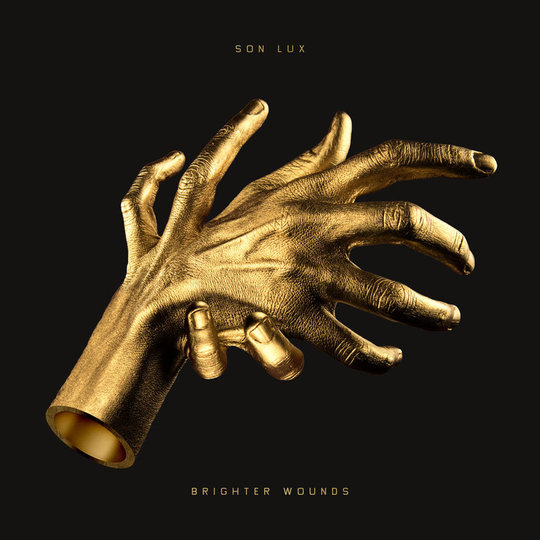 “Is this what resurrection feels like?”, Son Lux’s Ryan Lott asks in his distinctly world weary voice on Brighter Wounds’ closing track. Lott and his bandmates Rafiq Bhatia and Ian Chang made their mark as a necromancers of sound themselves, turning earthly and organic sonics into sweeping, widescreen digital productions. Records like Lanterns and Bones are bold musical depictions of alternate worlds. Worlds made possible if the powers that be were more inclined to inquisition and innovation instead of vanity and greed. Succinctly put: the sound of tomorrow, of possibility, of wholesome imagination.

On Brighter Wounds, Son Lux’s bright and exquisite canvas is noticeably torn, and we get a glimpse of what lurks behind. Idealism immediately makes way for crippling doubt on opening cut ‘Forty Screams’, as Lott laments what kind of world his newborn son will inherit in wake of the Trump administration. Musically, the track recalls a similarly irradiated and hazy anaesthesia as The Flaming Lips’ The Terror, another album that signifies a rude awakening for an inherently optimistic alliance.

Like that record, the carrion eats away at Son Lux habitually glimmering resplendence on Brighter Wounds and that makes it all the more intriguing. Next to becoming a father during the making of the album, Lott experienced the passing of a close friend of his to cancer. The junction of such drastic events is bound to leave your head in a tailspin.

No track on the album is more erratic than ‘Dream State’ a helter skelter skirmish between a giddy ‘Woo-ooh’-hook and an arpeggio-laden dirge that sounds like a direct sample from accordeon virtuoso Mario Batkovic’s ‘Restrictus’. Though the track aptly reflects that restless impasse between outward an inward emotion, the constant hamming of that vocal hook inadvertently draws a laugh. Around the halfway mark, the whole thing dissolves into a crystalline ambience.

‘Dream State’ strikes as sort of a yin-and-yang: in its quiet moments, Lott reflects skeptically on being stubbornly confident and virtuous. When the song’s climax overloads in tidal of sheer musical bombast, with celestial choirs, compressed breakbeats and the whole shebang, Son Lux almost sounds like they’re mocking and subverting their inclination towards the grandiose. If that’s deliberately the case, the obnoxious and intrusive mess that is ‘Dream State’ would be all but redeemed. The more you think it through, though, the more brilliant it becomes.

For a Sox Lux record, minimalism, discordance and silence are better utilized than ever before. The most impressive track on Brighter Wounds ’Labor’ offers a fractured patchwork of cherubic strings, dub-flourishes and R&B, lumbering on eggshell beats. The song leans heavily on Bhatia’s whimsical guitar meanderings. Lott, however, predominantly enunciates lyrics from the perspective of a universal “us” or “we” , by default giving Son Lux this weighty and momentous energy. Whenever Lott, Bhatia and Chang indulge in the more playful and happenstance melodies, it gives a track like ‘Labor’ some much-needed warmth and off-the-cuffness.

To their credit, Son Lux do make a concentrated effort on Brighter Wounds for more spontaneous, less self-serious impressions, despite the rather weighty existential themes carried throughout as a whole. Both sonically and lyrically, ’Aquatic’ presents another absolute highlight. Like Bhatia’s little guitar improvs on ‘Labor’, a winsome strings section, recalling Björk’s ‘Venus As A Boy’, lifts up a restrained, muffled piano motif, while Lott, at his most hushed, contemplates the cycle between birth, life and mortality. The song stays adrift, just barely, and that big, epic call-to-arms build-up is nowhere in sight.

Brighter Wounds is, even when taking some valid risks, a bit infuriating to listen to, considering how singular the chemistry and MO of Son Lux has become after ten years. The record’s best moments are in the most understated, brief details, whereas its flaws often remain cemented when the band goes full Super Saiyan in their zealous quest to unearth unique sounds. After all, that last trait has been well-established. Lott isn’t the best singer on the planet, nor the best songwriter, but after five Son Lux records, his voice still sort of remains dampened in detachment, while the music wildly contorts and swirls around him. It would be interesting to see him use his own pipes more as a focal point sonically, which could be a key to push Son Lux beyond their comfy default setting of ‘stern, restless and monumental’.

Though refreshingly bold at key moments, Brighter Wounds still doesn’t challenge itself enough to be considered a radical and departure from its predecessors. But Son Lux still do a yeoman’s job at second-guessing themselves and coming away with enough surprising, wholly satisfying material. “I can break the rules you see, I’m not giving up”, Lott at one point sings on ‘The Fool You Need’. We’re counting on it, because only a fool would feign brightness in a wounded world.