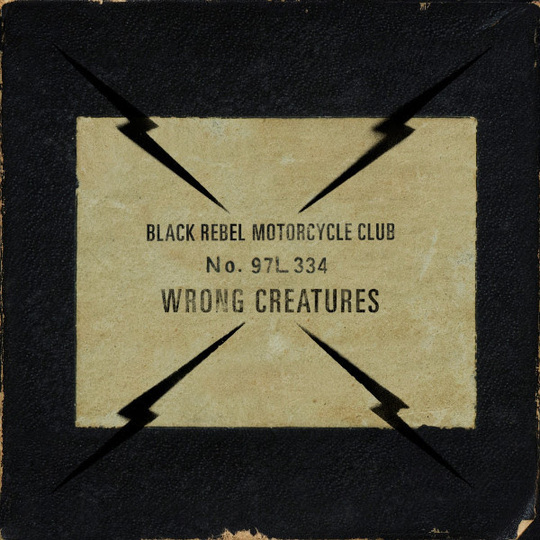 Well. Black Rebel Motorcycle Club used to be cool. Just like The Raveonettes used to be dangerous (and not just signifiers of film noir), or Wolfmother used to be awesome (not just puppets miming Led Zep – which also used to be awesome), or Tame Impala used to be the rock revival that everyone so desperately wanted (and not just Aussie lads stroking a prog-sized ego). But years passed, and we, the white kids of the Noughties, grew out of our parents’ record collections. At least, I hope you guys did.

I’m listening to ‘Calling Them All Away’ now, from BRMC’s thirteenth or so bid for commercial success, Wrong Creatures. It’s one of those 'yeah, we’re gonna purge, have a spiritual revival now, with all the feedback and sitar' moments, which cruises in slow like Spiritualized and ends big and boisterous like Swervedriver. It’s a deliberate ratchet upward, like Peter Hughes and his mate Robert Turner Been had already mapped out the arena, and plotted the choreography, and rehearsed the semi-sincere-but-intentionally vague stage banter that they’d toss out at the gig. Meanwhile, backstage, Hughes swigs the whiskey in his tumbler and snorts. Don’t take much to please those suckers, huh, he says to Been with a chuckle.

See, BRMC used to be cool, when you believed all the myths about rock – that guitar-based music is dying, that electric guitars careening through solos are the pinnacle of godhood, that only the grandiose motions and formulae of a Solid Band could convey True Emotion or Real Faith or Good Music. The thing is, Hughes doesn’t even buy into that shit. 'The only advice I would give is don't fall into the trap of thinking you're important or what you're doing is important,' he told us last month. 'That's one of the dangers you've got to watch out for.' And THAT’S curious – if you see your own output as disposable, then why the fuck should I even bother to analyse it?

But, y’know. If you swallow Hughes’ advice wholesale, and pretend that Nick Cave did nothing more than serve quality product to an audience hungry for murder ballads, and discredit dialogue or catharsis or the molding of identity, then Wrong Creatures is fine. Like how Horrors are just fine after Primary Colours. ‘The Ninth Configuration’, in fact, reeks of that modern pre-packaged epic mentality. If you believe in rock – or rather, if you can’t hear the blues without dollops of fat-laden reverb – then ‘Question of Faith’ is absolutely fine for a single. Yes, quite fine. Ain’t it fine, Jim? Hand me a beer.

Even by BRMC’s terms – which, let’s face it, haven’t been that high a standard since ‘Abstract Dragon’, the song so definitively experimental that Hughes and Been named their label after it - Wrong Creatures is just disappointing. Anyone who bandies the phrase “I want your creature love” in a potential new jingle for Ford trucks (‘Little Thing Gone Wild’ – see, even the chorus sounds destined to accompany dirt-slinging motor vehicles and other signifiers of masculinity) clearly isn’t concerned with 'moving forward' or 'making a statement'. Rather than set out into any new territory – like, I dunno, the new year – BRMC merely tick off boxes on the time-tested How To Build A Rock Album checklist: ‘DFF’ is the laminated portfolio cover, ‘Circus Bazooko’ the prerequisite wonky cut, ‘Echo’ the ballad that can carry across a stadium. No wonder Hughes can’t give a straight answer about anything beyond the technical parts of his work – there’s nothing creative to discuss.

But hey – BRMC are still cool. And if dated poses of coolness and Good Music are all you care for in rawk, then here’s another album for ya, just like all the other ones you consider cool.