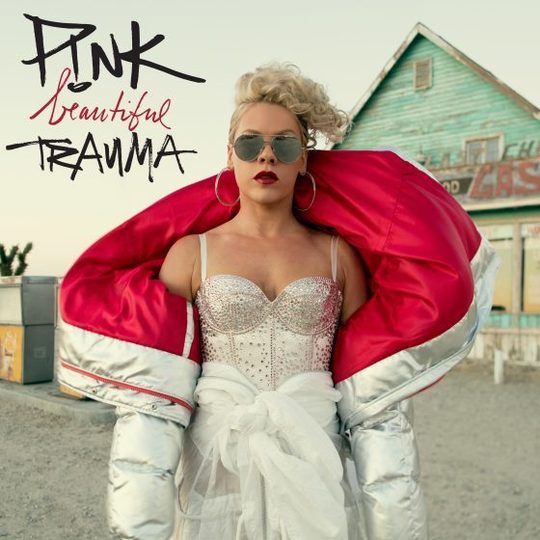 Beautiful Trauma is a prime example of expert-level, pop-magpie song writing. It borrows wonderfully from a wide array of influences, dropping flecks of melody and intonation from a barrage of classics, tantalisingly familiar but always just different enough to spin into something new. From the opening strains of title track ‘Beautiful Trauma’, we’re instantly reminded that P!nk, aka the less exclamation-loaded Alecia Moore, ain’t your regular goody-two-shoes pop star. In fact, that’s always been one of her strongest selling points.

If Afroman is still struggling with his child support payments, a handy solution might have presented itself in the form of a potential lawsuit over album track ‘Revenge’ – one of the most satisfyingly delivered pieces of subtle plagiarism that’s surfaced for a long time, taking the form of a male/female smack track featuring Eminem. Whilst it’s a certified pop rager, it becomes difficult to square P!nk’s supposed feminist ideology with Mathers’ crude, misogynistic outburst of “you hit the ATM in my Mercedes Benz with all your lady friends (whores)” – a disappointing abuse of platform to say the least, but maybe we’re expecting too much from Em, a man not exactly known for his PC inclusivity.

Staying on the theme of subtle plagiarism, Moore and the writing team behind ‘Whatever You Want’ might be getting a call from Radiohead’s lawyers soon, as it extremely cleverly merges ‘High & Dry’ and ‘Fake Plastic Trees’ with a couple of neat twists. No doubt some purists will just have spat their coffee out and are now frantically Tweeting their disdain over that comparison, so job done on that front.

Ramping up the stamp-along factor, ‘What About Us’, ‘I Am Here’ and ‘Where We Go’ are all classic slices of sad-pop which revel in the broken pieces of a fractured relationship as they gurn their way through a bad Calvin Harris comedown in Ibiza, battered by frantic anti-folk guitar borrowed from the likes of The Lumineers and Of Monsters and Men. These three in particular are all total bangers if you like the sort of pop record that pushes you slowly towards an existential crisis, and I do.

The piano balladry of ‘But We Lost It’ is a topline writing masterclass, a spiralling and sprawling melody which is strong enough to carry itself with minimal accompaniment as Moore belts out “the bone breaks, it grows back stronger”. As part of the album as a whole, it serves as a vehicle to showcase her impressive vocal dexterity and range, both indisputably on point and as strong as ever.

Lyrically, as with most of Moore’s output, it’s not a record which shies away from difficult subject matter, whether it’s touching on lost innocence - “I wish I could go back to playing Barbies in my room, they never say that you have to grow up quite this soon” – equating loving relationships to drug addictions “when the chemicals leave my body they’re gonna find me in a hotel lobby. You, my perfect rock bottom” - or struggling with temptation - “I want to be so lost that I’m found, naked with my blood on the ground, I am here, have already seen the bottom so there’s nothing to fear, I know that I’ll be ready when the devil is near”.

There’s a definite lull around the midpoint of the album which could probably have been avoided by making a couple of choice cuts to the tracklist – ‘For Now’, ‘Secrets’ and ‘Better Now’ are all fairly forgettable and throwaway, but the fantastic ‘Wild Hearts Can’t Be Broken’ is a tense and beautiful song which finds a mature Moore in darkly contemplative but staunchly stoic mood, and might have been better served as a tasteful and fittingly defiant closing track from the record.

Instead we’re left with the minimal and somewhat disappointing ‘You Get My Love’, which does come with some impressive Mariah-esque vocal acrobatics, but ultimately lands somewhere around Regina Spektor-lite, although not quite as wonderfully weird or spine-tingling as you imagine they were hoping for, and sadly means the album fizzles out in a bit of an anti-climax.

Across the record lines like “you punched a hole in the wall and I framed it, I wish I could feel things like you” hint at the darkness which can lie behind Moore’s output, continually making her a pop-star capable of delivering curveballs which allow her to operate just outside the parameters of the mainstream, never quite one to play by the rules but consistently delivering over the years when it comes to penning a hit.

With Beautiful Trauma then, Moore proves that she’s both still relevant, and a vital, confident female voice on the pop circuit who has impressively never really succumbed to the pressures of the overly-sexualised pop machine. If we want our pop stars to be role models for young women, we could do a lot worse than holding up P!nk as an example of how to play the game by your own rules. As she says on ‘Wild Hearts Can’t Be Broken’: “There’s rage and terror and there’s sickness here, I fight because I have to, I fight for us to know the truth.”