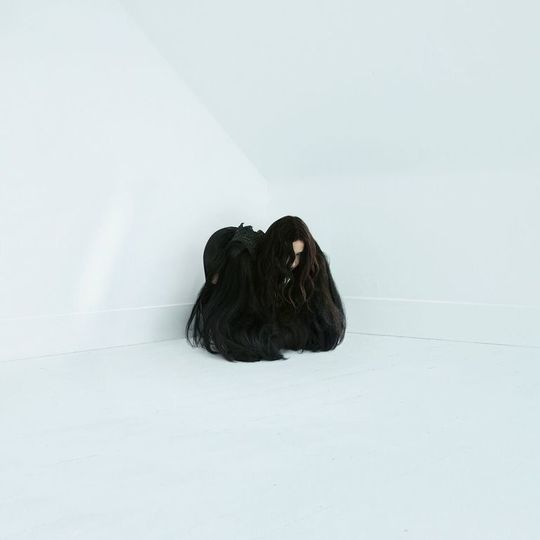 Backing into a tight corner in a white space, Hiss Spun is Chelsea Wolfe's closest to an attempt at looking out, at communicating with something outside of herself. The album cover sees Wolfe cloaking her body with a dress of black hair, which the wanness of her face peeks out of ever so slightly. She is on guard; waiting for the predators to arrive. Wolfe's tired of hiding, apparently. Now she's on the attack. Hiss Spun begins with the sound of a guitar too close to an amp. It feels like a syringe, filled with hot wax which pokes at the eardrum. Then, with sharpened claws, comes the punishing walls of caustic distortion. The bass bears the stank of a malodorous corpse, the drums rattle like hollowed bones. You can see the speakers struggling with the vibrations, as they pummel out a disgustingly sexy tri-tonal riff - and this is only track one.

If the guitar seems familiar, that's because Troy Van Leeuwen (Queens of The Stone Age) is at the reins, and he's brought his Songs for the Deaf-adjacent A game. The combination of Wolfe's evanescence (absolutely an emo double-entendre that I won't let go unnoticed) and Leeuwen's dirty earthiness, is one that totally works. Their marriage of brutality and tenderness cleans the sky of its smoke-clouds in '16 Psyche', before raining fire in 'Vex'. The song stands out as the album's closest thing to doom-metal, as Aaron Turner (Old Man Gloom) screams alongside a spinning Catherine Wheel of blazing guitars and pelting drums. After the attack comes a warren of effects and distortion. Wolfe softens after the feast, singing with a head voice that sounds remarkably like FKA Twigs. It's a moment of brief hypnagogic gentleness, but a gentleness to be cautious of – like a daytime scene in a horror film. "My finger is in your wound" she breathes. And on 'Particle Flux': "though you tried to swallow me whole, I did not succumb." Although it's not with total conviction, as she concedes: "you know, in this hell I am torn."

Wolfe has always been torn between being on the defence and the attack; between the tender and the brutal. For the first half of the album, she battles with bloody claws. She is all slaughter and metal (although her take on it is rendered into something more like stoner-doom metal), and the thing with heavy metal, is that it is all rage. It rejects the myth of stability; it resists the idea of production. It is a lifelong temper tantrum. However, the palm-muted strings and hushed lullaby of the album's best track, 'Twin Fawn' prick lightly like tickled goosebumps. Then, another hair-splitting bomb goes off. "You cut me open! You lived inside me!" Wolfe rages, as she seeks revenge upon her prey. But this time, the tenderness is retained - it's an uncannily serene moment of bothness, or perhaps more accurately, in-betweeness.

From 'Twin Fawn' onward, the album exhibits exactly what makes her so precious. No longer relying on metal's singular obliteration, nor fluttering towards the edges of ethereality, Wolfe commands both directions while lodging herself in-between them. The feedback levels are drawn out, the amp is in overdrive, and Wolfe no longer has us anchored to the seed idea of the song, but now has us listlessly drifting alongside it. In the aptly-named 'Static Hum', she draws our attention away from her creation, and towards the material that she cannot helm. We're drawn into the grey noise between the beats, into an abyss that has yet to be made pregnant, in those regions of doleful, sorrowful shades. And after the album's last desperately hopeless gush, Wolfe is swallowed by her own feedback.

What Hiss Spun does, though it begins with a brutish feast and middles with a moment of tenderness, is draw us towards the liminal. It doesn't seek to make darkness visible, but rather exposes that which isn't supposed to be: the in-between. Wolfe works like torchlight shining into the forest at night, when the personality of leaves is changed. Nevertheless, though Hiss Spun probably won't end up as the best of her career, it may well be Wolfe's best so far.