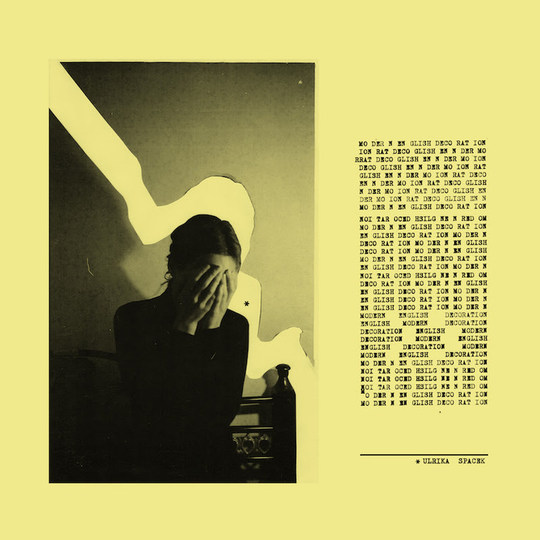 East London's Ulrika Spacek have typified the strong-yet-often-overlooked DIY scene in the nation's capital. While the rest of the UK's major musical cities (Glasgow, Manchester, Nottingham etc.) possess a fierce DIY ethic - probably due to their overshadowing by London - it is often forgotten that the Big Smoke has some equally excellent underground music out there.

Across London's various zone 2 and 3 boroughs, there are bands and creatives working tirelessly to do what they love in one of the world's most expensive cities. Ulrika Spacek, who live in a shared house and former art gallery space in Homerton are a perfect example of the many movements happening throughout the capital, in their case self-recording and producing in their house and setting up shows in whatever venue or space will have them. And the hard work shows. After their debut The Album Paranoia came out in early 2016, the band have garnered a reputation as a reputable live act and have gone from strength to strength as a creative unit.

Their follow up Modern English Decoration is the result of that dedication. While their debut had a tendency to be a little 'top-heavy', the band's second record is the five members working together as a unit creating a hypnotic, alluring sound driven by a tight rhythm section of Ben White (bass) and Callum Brown (drums) over-ridden by the interweaving guitars of Joseph Stone, Rhys Williams and frontman Rhys Edwards. While the band certainly wear their influences very firmly on their sleeve (Deerhunter, Sonic Youth, Can) they have still managed to craft an enchanting record which is ultimately theirs.

Opener 'Mimi Pretend' very much sets the tone of the album, building on a simple riff and rhythm and seeing how far they can stretch a song idea without ever getting over-indulgent. Ulrika Spacek has managed to find a balance between having an airy, "jam" vibe while still condensed into a "pop song". While this, along with Edwards' vocals and certain turns the band take in songs such as 'Silvertonic' makes the Bradford Cox comparisons somewhat inevitable, they still maintain enough of their own spin on proceedings to keep it from becoming a full-blown parody.

Meanwhile, lead single 'Everything, All The Time' takes on a more fuzzy affair as opposed to the reverb that drenches most of this record, switching more to a Preoccupations vibe. As a song, it plays with loud-quiet dynamics perhaps better than anywhere else on the record and is a testament to the band's songwriting abilities. The album's title-track offers a bit of a breather after the full pelt single, and as the record's quietest affair is a welcome break from the band's signature sound. Elsewhere, 'Saw a Habit Forming' blends specifically Nurse-era Sonic Youth in with their by now familiar sound.

If there is a criticism to be lobbied at Ulrika Spacek's follow-up record, it is simply that it does largely only have one setting. While the London quintet have crafted an excellent sound crossing dream-pop and krautrock, it is essentially a constantly driving piece with little to no respite over its 45 minutes. Modern English Decoration is brimming with confidence but not much variation. However, as by its nature, the album is great to just get lost into and drift away with, it achieves its primary mission with aplomb. This is a promising record from a still young UK band who have, with their second record, somewhat mastered their craft and it will be exciting to see where they go next with it.