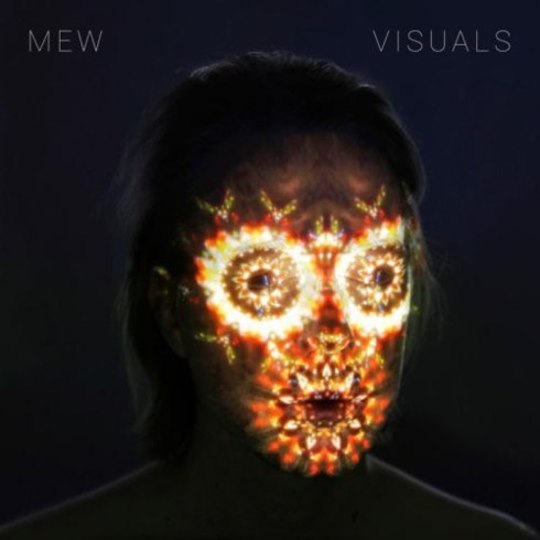 If, like me, you have had many a 'moment' with Frengers, the third album from Mew and particularly its closing track 'Comforting Sounds', which features the best symphony in distortion and controlled chaos I've ever heard, the progression the band has made over their next three records may have been something of a challenge. Perhaps you've been ever-more exhilarated as the boundaries of what seemed possible for the band back in 2003 have been stretched ever further. Perhaps you've found the Danish quartet (now trio after the departure of Bo Madsen in 2015) increasingly frustrating and, dare it be said, irrelevant, as their scope has expanded and sent their power and purpose in the other direction.

Visuals is Mew's most accessible and direct album in recent memory, possibly ever. The band seem invigorated, purposeful, ebullient event. As 'Nothingness and No Regrets' heralds the opening of the album – called Visuals because the visuals for the touring shows the band are currently undertaking were envisioned prior to the writing of a single note – and cascades into a driving electro pop swirl of toms, synths and understated guitars as Jonas Bjerre's vocals drift, in their customary multi-tracked way atop it all, the first thing that comes to mind is that this could be Mew's bid for a more youthful audience. Everything is mixed bright. Synth leads are prominent and hooky, the drums are prominent, bass is made to sound synthesised. The feeling persists on 'The Wake of Your Life', a more 'Mew'-like track which moves through several sections, most of them unexpected, but is lifted by a glorious punch of a chorus, just like its predecessor.

There's an aggression at the heart of 'Candy Pieces All Smeared Out' and 'Ay Ay Ay', largely provided by thunderous bass riffs, which has been sorely lacking on recent Mew releases. The latter utilises the underused 6/4 time signature. The effect can be disorienting. Feet aren't used to tapping in six crotchets. They'll catch up eventually though and you'll find that this is a real album highlight.

Frustratingly, 'Learn Our Crystals' and 'Twist Quest' feel insubstantial by comparison with what goes before. 'Twist Quest' featuring an inexcusable saxophone solo and tips things a touch too far in the direction of the Eighties. Perhaps confusingly, my other frustration with this song is that, just as it is setting up what could be a really intense middle eight or coda, it fades out and finishes, designed, apparently, to operate as a pop song. 'Shoulders' restores order, an intelligent ballad full of yearning.

Happily, closing trio '85 Videos', 'Zanzibar' and 'Carry Me To Safety' restore any faith that may have been lost about Mew being a substantial and important band. '85 Videos' is a driving pop song of the kind that only Mew can really write and pull off effectively. It sounds like all the best songs you listen to, but at the same time could only be a Mew song. Perhaps you know what I mean by this. Sorry if you don't. 'Zanzibar' is a beautiful, downtempo ballad and then, as with most Mew albums comes the closer. And what a closer it is. Feeling like the 'Comforting Sounds' this iteration of Mew could write, the first half of the track is a mid-tempo groove of relatively standard proportions for this band, before it booms into a coda of gorgeous noise. The album's second sax solo plays a major role, this time to much better effect and everything finishes on a wonderful note.I'd write more but I don't want to spoil it for you.

And so, the first album for some time as a trio from Mew epitomises all that is both great and frustrating about the band. Far from perfect, but confident and assured. Sure, it's easy to miss the days of dominant guitars and a 'rock' feeling underpinning the whole thing, but this feels like the right album for Mew to re-emerge with at this point.