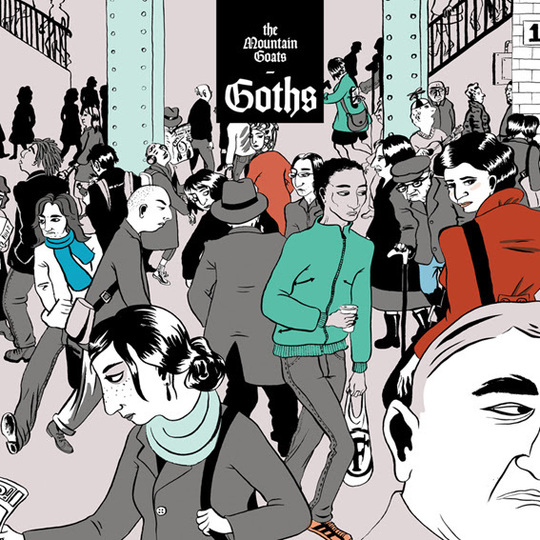 It’d be easy to open this review in a Pitchfork historian way, with broad statements about that long-suffering subculture of the goth. And sure, even the roughest sketch of what this 40-year-old fascination for death entailed – fog machines, perverse crosses, skeletal frames - would be useful for a concept album that revolves around its black-clad adherents. But any rote summary of the goth phenomenon would overlook the whole dang point of John Darnielle’s latest song cycle, easily his most lavish creation yet for indie institution The Mountain Goats. Just as last year’s Beat the Champ was less about wrestling and more about the wrestlers that never quite leave the ring, Goths doesn’t dwell on the Batcave or The Cure (although Darnielle apparently wrote a song called 'Get High and Listen To The Cure' that didn’t make the cut). Rather, we experience the surreal life of the typical goth from the eyes of adults as they reconcile their former and current lives. And what’s brilliant about that, is how easily any ageing muso could relate to the web that unfolds within.

First off, an admission: half the reason I’ve enjoyed this album so much is how well form matches function here. To begin with, Darnielle outlawed guitars in favor of the Fender Rhodes, an electric piano that really took off in the Seventies – especially with Steely Dan, the coolest cats on AM radio. Thus, rather than the spirited jangles you’ve come to know and love from the Mountain Goats, Goths glides with that super urbane, champaign-tinted swing, with those suave and fluttery sax solos that just whisper 'adult'. And I get a huge kick out of that, as someone who learned to savour Steely Dan’s sophisticated jazz structures and louche antiheroes as I matured. So for me especially, the gorgeous sax arrangements on songs like 'Paid in Cocaine' and 'The Grey King and the Silver Attunement' (yes, all the titles on Goths are GREAT) sets that wizened perspective that Darnielle hoped to impart throughout, even when the reminiscing adult isn’t always in the frame.

Oh, yes – these stories. I mean, you probably know better than me how well Darnielle can weave disparate scenes into a coherent concept, and how damn well he can breathe such vitality into those scenes, and that’s all in place here. What’s marvellous about Goths, though, is how bizarre situations – like, wait for it, the trials of the cult in 'Unicorn Tolerance' (told you) – become familiar passages of youth. As we listen to the protagonist sleep in graveyards and scale dank wells, he notes that he’s ”drawn to where I’m drawn / seldom wonder why, just follow you”. Likewise in 'The Grey King', even if you don’t “file your teeth down to fine points”, you’ve surely either known, seen, or been one of those guys that try to fit back into the uniforms of their glory days.

Mind, the best moments could arguably be the most mundane ones. I can’t entirely explain, for instance, why the ultra-casual 'We Do It Different On The West Coast' works so well – perhaps because, at some level, intensely involved (and green) musos like me would love to still be that guy that keeps tabs on the scene 20 years from now. And then there’s the genius of 'Wear Black', and the casual gospel of how to signify yr undying commitment to the cause in any situation (”wear black back to the car”); when the key change cranks the uplift factor halfway in, you could either laugh or bow your head in awe.

I could go on – about the beauty of how the torch is passed to a new generation across the
globe in the hushed 'For The Portugese Goth Metal Bands', or how a jaded veteran laments about the industry and contemplates folding in on 'Shelved' (which, ironically, contains the most 'goth' passage in the whole album, the bass solo, perhaps a bittersweet reminder of the ecstasies he’d have to leave behind). But for me, the moment that gets me every time – the one that might warm the heart of even the most dedicated goth-hater, and best conveys what the album’s really about – is when the radio DJ in 'Paid in Cocaine' pulls out a master tape of his old band. “All four of us / so fresh and alive”, he says, a stark contrast to their corpse-like personas. It’s that warm pulse, that gushing camaraderie, that renders Goths as more than a clever conceit; no, this album is a love letter, written in elegant cursive (and blood, obvs), for anyone and everyone that holds the underground to their heart.