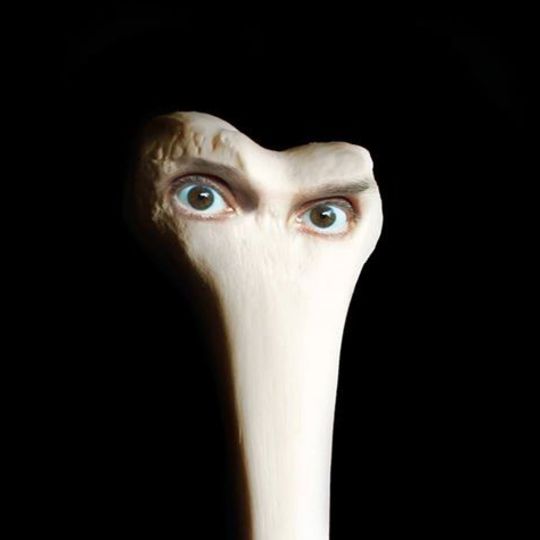 Place a clock on a jet that breaks the speed of sound, and you’ll witness time itself slow down. Light, say the physicists, is deathless because it’s so damn fast. Similarly, travel far enough – say, a few lightyears across the galaxy – and you’ll flow through both space AND time.

See, for her seventh album Juana Molina wants us to think of ancient magicks, with the bone on the cover gazing at us from its storied past. But Halo doesn’t invoke shamanic rituals – no, these are axioms and diagrams set in motion, perfect arcs and straight lines and right angles aligned both on the page and in the natural world. We shouldn’t expect less mastery from a physicist two decades into her field – yet, even for Molina, who has trekked odysseys through drone and voice before, Halo marks an epiphany in the science of travel. How does one hour flow so swiftly? How do the echoes of former futures sound so fresh again, as if their waning promise of grandeur never faded?

Well, solving any question in physics demands balance – one side of the formula must equal the other. And, more often than not, we reach that symmetry through the simplest route possible. Is this not a joy, that through efficient number crunching on paper, one can calculate the height of a tree, or the flight path of a flung stone? Songs like 'Cosoco' and 'Cara de Espejo' confirm that yes, this is a joy: take the bloated opera of Yes, and pare that down to match the dome-like economy of Neu!. Looks daunting, sure, but convert everything to the same unit of measurement, and you’ll speed through the rest – hence the crisp guitars, the analogue pulse, the vocals dialled back to congenial incantation. It’s the same logic that applies when finding the distance travelled of a speeding car in a set time interval. Basic steps yield a concrete answer.

But the real beauty of equations – and, by extension, Halo - lies in their utility. Paper airplanes and space shuttles both must overcome gravity to fly; likewise, the same economy in style applies to the hip opener 'Paraguya', Broadcast transmissions like 'A00 B01', or the meditations of 'Lentísmo Halo' and 'Cálculos y Oráculos'. 'Andó' shuffles with all kinds of tricky drums and alien signals, but again never detracts from the essence of melody, the x in the formula. Even songs more akin to Molina’s backlog, like the gentle creek flow of 'Los Pies Helados', resonate with the same resolute acceleration.

Now, I say 'formula', but Halo is by no means 'formulaic', in the usual degrading sense. The formulas at play here – and indeed they play, humming and skipping under Molina in songs like 'Sin Dones' as she wanders across the skies – could belong to no one else. For, as much as I hear modern physics in the design, the superstitions of old still linger here, like when distant flutes (panpipes?) blow softly on 'Los Pies Helados'. Perhaps they’ve always mingled, dancing undetected to all but the most perceptive scientists – for what are theorems and myths but two ways of rendering nature and its miraculous existence?

All of this, just to say – that, as axioms in math and science are cemented into the academic canon through decades of affirmative trials, so Halo cements itself into yr ears. This is logic in motion, and it’s dead beautiful to watch every piece of these puzzles fall into place.