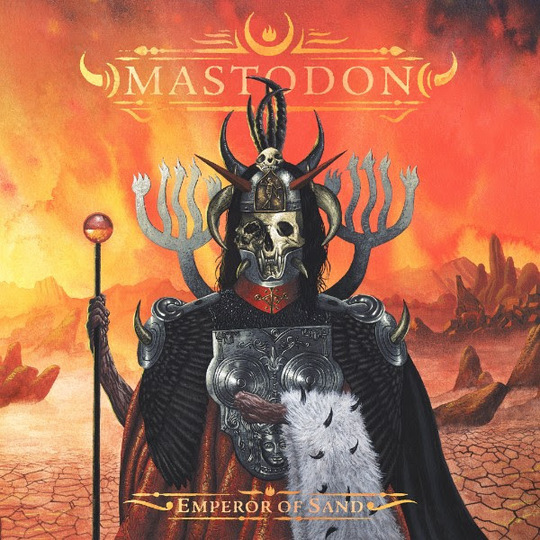 In a competitive and fast-paced metal scene that changes almost as often as the wind, Atlanta's Mastodon have so far had no trouble at all keeping pace and indeed often outstripping the competition with their sheer inventiveness and unique, progressive, oddball take on the genre.

If you’re not familiar with the band, they’re like the MC Escher of modern metal, or perhaps the Salvador Dali, or HR Geiger. Their music is confusing. It runs backwards, sideways, loops on itself like a Möbius strip. They’re kind of weird. They’re unsettling. They’re intellectual in the sort of way that suggests they might have an obsessively large collection of dead moths and be interested in the plastination of corpses. They appear hulking, like cosmic vikings, with guitarist Brent Hinds bedecked in blue Celtic tattoos. You wouldn’t mess about with them, basically.

On Emperor of Sand, their seventh full length record – no mean feat in itself – we find a similarly spaced-out Mastodon, but also a band who are becoming more playful and melodic, whilst simultaneously dragging themselves deeper into their dark abyss of Lovecraftian influences. Crammed with allusions to ancient history, mythology and biblical references, they return renewed to a lyrical world they began to craft on their 2004 release Leviathan. A bit less self-aggrandising, a bit more interesting, much like the album itself.

An eye-watering guitar solo on ‘Roots Remain’ brings things into sharp focus on a first listen through. They have not lost their edge. If this was a blade it would be a surgeon’s scalpel. It’s the sort of song which peels you open and has a good rummage around inside. You won’t be the same after listening, and they might have dropped their keys in there when they stitched you back up.

Elsewhere ‘Ancient Kingdom’ has some surprising major key twists and turns which hint at something a bit less brooding from the quartet. Now heavily encamped in the 'clean vocals' bracket, the band are still moving towards, dare I say it, a more commercial strain of progressive metal, if indeed there is such a thing. Is it possible to write a mainstream technical metal concept album about cursed men wandering in deserts? The jury’s out on that one.

The intense instrumental experimentation and frantic fretwork is still abundant, but the po-faced professional musicianship is conspicuous by its absence, and Mastodon wear their new look well. In terms of where the record sits in their canon, it treads a fine and nuanced line between Mastodon-lite and the envelope-pushing experimentation that makes them genuinely exciting.

The key words here are restraint and cognisance. It’s clear that they’ve got a newfound respect for their own music – just as things take a step too far in the wrong direction, they herd songs back in masterfully. By the same degree, when they’re in danger of playing it safe they have absolutely no qualms about nose-diving a song structure off a cliff in a spiralling descent into madness.

‘Jaguar God’ feels like an attempt at writing their own version of Metallica’s mighty ‘One’, but there’s much less pomp and ceremony and a whole lost more legitimate sincerity. As a closer for the record, it’s about as close to a pop song as a band like Mastodon are likely to get. It may well divide fans, but it proves that they’re about as far from a one trick pony as it’s possible to be.

With so much discussion in the rock and metal world about where the future festival headliners might lie, it’s increasingly looking like Mastodon and their ilk are the natural heirs to a throne that’s been jealously presided over by the old guard. The band are more than capable of filling some very big shoes – the question is really just whether, and when, they’ll take the plunge towards finally breaking into the big leagues.

Emperor of Sand, it seems, is a confident and timely step in the right direction. A balanced and well measured offering that might not revolutionise the heavy music landscape just yet, but positions them very well indeed for future greatness.