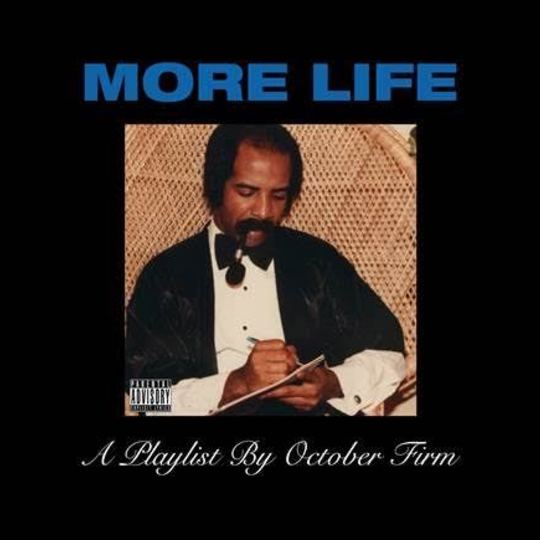 Purely as a rapper, Drake has perhaps never been less compelling than he is on More Life, his latest project – technically billed as a playlist - which clocks in at a behemoth 22 tracks and 82 minutes. Views was similarly overlong, doubling as both his most commercially successful and least compelling album, but while it’s understandable to be hesitant about another dancehall and grime-tinged Drake release less than a year later, he smartly uses this looser format to take somewhat of a backseat and showcase more a understanding of the former while still clinging to his awkward love of the latter.

The album’s titular credo is an ode to continued success and celebration in the face of adversity that is so vaguely grandiose and oft repeated it feels cribbed from a DJ Khaled on an elliptical. The pure rap songs, including opener ‘Free Smoke,’ feel like the equivalent of a Drake reduction sauce. ‘Free Smoke’ includes his late-night Tumblr-esque overshares (“I drunk text J-Lo/Old number so it bounce back”), grandiose brags (“I took the team plane from Oracle”), and rap come-up-isms (“Used to get paid for shows and front-door money / Five, ten, twenties, hand sanitise after you count that”) in no particular order and forming no logical narrative. The beat is tinny, and tiny, the scrawny younger sibling of the guttural production that characterized If You’re Reading This It’s Too Late.

‘Gyalchester’ has a few boasts that land with the intended impact, but the success rate is lower than some of Drake’s shit-talk master classes like Nothing Was the Same’s ‘Tuscan Leather’ or Take Care’s ‘We’ll Be Fine.’ On ‘Portland’ and ‘Sacrifices’ he’s outdone by Quavo, 2 Chainz, and Young Thug, the latter of whom packs so many similes into his 46-bar verse that connecting them all would require a Rust Cohle-style string theory board.

And yet, at what could be the moment of Drake’s complete undressing, Skepta’s incendiary interlude, he smartly borrows a play from his mentor Lil Wayne (on the Andre 3000 and Tech N9ne featuring interlude from Tha Carter IV and removes himself from the picture entirely. It’s one of a number of moments on More Life where Drake shows more commitment to creating a mood than being the star of every song.

A major reason ‘One Dance’ wound up being among Drake’s biggest hits is that he finally seemed to understand when to get out of the way of a killer, infectious instrumental. There are several tracks on More Life where the production is so narcotising that the songs could easily reach the same stratospheric peak, and Drake smartly shows the same restraint. ‘Madiba Riddim’ has infectious claps and breezy guitar that are textbook summer smash, and ‘Get It Together’ blends soulful, jazzy piano and dancehall-meets-deep house drums to create a perfect vehicle for rising singer Jorja Smith, with Drake admirably (and uncharacteristically) playing second fiddle. Sampha’s ‘4422’ is a bit of a square peg with its slow 808 slap, but there’s no denying its quality.

While Drake’s dancehall infatuation has led to much critical discussion over whether it’s simply artistic curiosity or cultural appropriation, it’s hard to deny that style is a better fit for his vocal talents in 2017 than the tough-guy grime persona he adopts on tracks like the aforementioned ‘Gyalchester,’ as well as ‘No Long Talk,’ and ‘KMT.’ The speedy rat-a-tat style and shorter bars don’t give Drake room to do anything but puff out his chest, and he’s always been better at crafting unique melodies than unique rap cadences. Even though ‘Fake Love’ is as lyrically on-the-nose as it gets, Drake does a better job capturing his current mind state in the track’s unhinged hook and shortened verses than he does on many of the album’s pure rap cuts.

The sequencing on More Life feels far less deliberate than previous Drake records. An introspective track like ‘Lose You’ belongs in the same slot as album previous end credit songs such as ‘Thank Me Now,’ ‘The Ride,’ and even ‘Jungle’ and ‘Paris Morton Music 2,’ which fill the same role despite being followed by bonus tracks. Here, it’s thrown between two empty calorie records in ‘KMT’ and ‘Can’t Have Everything,’ diminishing its impact. The actual closer, 'Do Not Disturb', benefits from a choice sample of Snoh Aalegra’s “Time,” but lyrically it doesn’t cut as deep as some of its predecessors, or ‘Lose You’ for that matter.

Ultimately, More Life does a terrific job creating a mood with its dancehall-flecked, atmospheric production (handled most impressively by the likes of Nineteen85 and Frank Dukes), and it certainly points to a fascinating fork in the road moment for the world’s biggest rapper. He could continue to prioritise making quality pop tunes in which he may actually play an increasingly smaller role, or he could slap on a black tracksuit and make an uninspiring grime record where he apes all of the genre’s rising talent instead of giving them the spotlight they deserve. He shows enough musical self-awareness and maturation on More Life that it’s fair to be cautiously optimistic for the former, though with Drake half the fun is not knowing whether he’s aware enough to do what’s in his own musical (or personal) best interests.

Look at the Powerful People