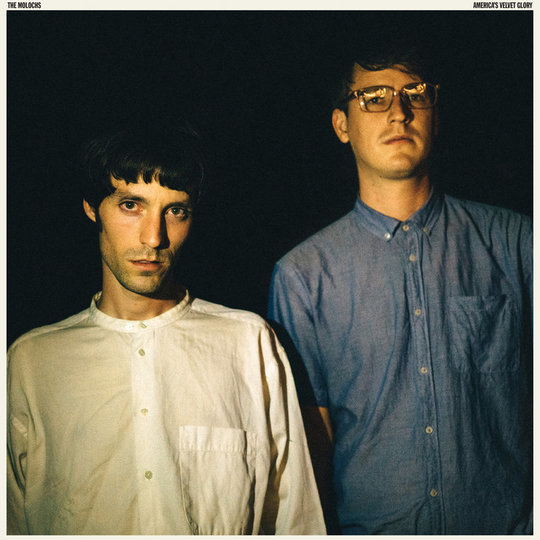 The Molochs’ America’s Velvet Glory is a love-letter to guitar rock, though not in the sense that the tracks are packed with searing solos or especially complex fretwork. The album is simply drenched in guitar, from cheery acoustic chords, warbling melodic lines to bluesy arpeggiations. It’s largely steeped in jangly Eighties rock, with flecks of psychedelic folk and surfer nonchalance providing additional variations on the sound.

The album isn’t as occult as one might expect for a band named after a creepy god associated with child sacrifice, but there are occasional blasts of organ that punctuate tracks like ‘Charlie’s Lips’ and ‘Ten Thousand’ and give them a bit of underlying dread, which connects to the album’s thesis. Though America’s Velvet Glory is a throwback record, it’s decidedly different than recent sunny sounding projects by bands like Whitney or Twin Peaks.

Throughout the record, singer-songwriter Lucas Fitzsimmons crafts an intriguing, if a bit all over the place character for himself to play. He’s a loner (‘Ten Thousand’), envious to the point of being concerning (‘Charlie’s Lips’), and sort of a wayward soul in the world today, but he’s also generous and compassionate (‘The One I Love’). In a sense, The Molochs’ vintage sound helps to cast their protagonist as being at odds with the world around him, finding a dissonance between the romanticised sounds of the Sixties and Seventies and our world today that other artists with similar influences don’t mine as heavily.

There are plenty of slower, more contemplative tracks on America’s Velvet Glory, but the best moments are when Fitzsimmons pick up the pace and aims for something more rollicking. ‘No Control’ is morbid and pessimistic but it’s an absolute riot, with thumping drums and a lively lead lick that gives the track some serious forward thrust. Fitzsimmons’ lyrics, “I sit inside my room and think of all the things I lack / I think of all the people that I loved that won’t come back / I walk outside my door and see the sky turn brown / I smell the sewers and I see the faces on the ground,” are incredibly grim, but they create an exciting contradiction with the nimble instrumentation..

Fitzsimmons is a descriptive, often fascinating lyricist with an appreciation for the many layers of melancholy from anxious (“I woke up in the morning sweating, boiling in life’s soup”) to exasperated (“When you walk down the alley / You always trip on the same crack / In spite of all the times I’ve pointed out / You always fall”).

Going forward, The Molochs may want to deviate a bit from the formula they used on America’s Velvet Glory, which gets pretty well worn even though the record is fairly compact at only 11 tracks, but it works well as both a cohesive throwback and a character study. The Molochs’ sound isn’t groundbreaking, but they’re repurposing familiar elements to make a statement that anyone who’s ever felt like a relic of a bygone age will understand.