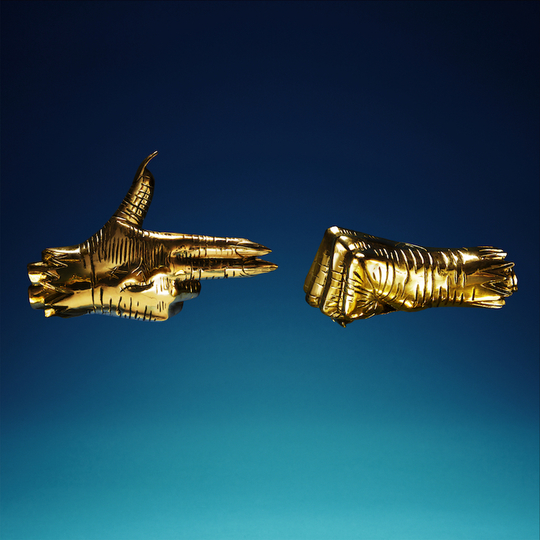 When El-P released his debut solo record, Fantastic Damage, it was widely misinterpreted as a treatise on 9/11. It was an easy mistake to make; this was May of 2002, and the album was awash with a brooding paranoia that tapped uncannily into the mood of a nation having its civil liberties torn asunder by the PATRIOT Act. In actual fact, though, Fantastic Damage was already largely complete by September 2001, with critics projecting their own contextual ideas onto it thereafter.

Long gone are the days when El-P’s music was not inextricably linked with his politics. There are two narratives that help chart the Run the Jewels success story and one of them involves the fierce vein of protest that courses through their music. It ebbs and flows in terms of its specificity - from broadly railing against fuckboys to eviscerating police brutality, government corruption and social inequality - but irrespective of the target, the ever-aloft middle finger is a crucial part of the RTJ DNA. Beyond the records, Killer Mike’s erudition on the political topics has led to appearances on CNN, and his well-documented support of Bernie Sanders’ presidential campaign since Run the Jewels 2 has only cemented his group’s reputation as a hip hop pairing who have viscerally rejected the status quo.

The other recurring theme is one of triumph against adversity through little other than grit and perseverance; when Run the Jewels dropped back in 2013, both men were on the cusp of their forties and could have been forgiven for having doubts about whether their best work still lay ahead of them. The bloodied, bandaged hands on the cover of RTJ2 symbolised the years of struggle, with critical acclaim plentiful but commercial success at a premium; it’s telling, then, that when the hands return on the artwork for Run the Jewels 3, they’re made of solid gold. Long in advance of the cover being revealed, you could’ve predicted they’d go down that route; neither El nor Mike are shy of interviews or social media and by the end of the RTJ2 press cycle it was abundantly clear that they knew their time had come.

All of which is to say that it perhaps felt as if the element of surprise might be lacking a little on RTJ3, particularly in terms of its thematic content; the sensible money would’ve predicted plenty of talk about success, as well as a doubling down of the ferocity of their political bent, given the myriad, chaotic landscape changes that have occurred in the two years since their last record. Sonically, though, they open in genuinely disarming fashion; ‘Down’ might be as close to serenity as the duo have ever come, with Mike even floating a smooth, part-sung hook over El’s languid beat - when the latter proclaims "you’re going to need a bigger boat”, it comes off more casual observation than menacing premonition.

Inevitably, though, it proves the calm before the storm. Claustrophobic intensity was the name of the game on RTJ2; this time out, El swaps it for a much less singular approach to the production, one where the only real throughline is a clattering boisterousness. He’s granted himself some real stylistic freedom, and it leads to some of the standout moments of his career behind the desk. ‘Talk to Me’ and ‘Legend Has It’ channel an old-school grandiosity on the beats, ‘2100’ weaves in a guitar that’s melodic on the verses and then squealing over BOOTS’ hook, and the standout ‘Oh Mama’ is a delicious funk strut, with the synths squelching one minute before approximating trumpets the next. Speaking of brass - look out for Kamasi Washington’s spaced-out sax on ‘Thursday in the Danger Room’, another highlight.

RTJ2 never really eased its foot off the accelerator at any point and, by way of comparison, RTJ3 isn’t quite as breakneck. Similarly, neither rapper responds to the turmoil of 2016 simply with blind rage; there’s a sense of measure to their ripostes, whether from Mike on ‘2100’ (“you defeat the devil when you hold on to hope”) or El on closer ‘A Report to the Shareholders’ (“we both hear the same sound coming, and it sounds like war.”) Meanwhile, ‘Thieves! (Screamed the Ghost)’ feels remarkably measured for what is, in essence, a pro-riot anthem, even on Mike’s scything post-Ferguson verse (“dummy don’t know and dummy don’t care” is his analysis of widely-derided CNN host Don Lemon.)

This is what makes Run the Jewels tick; the fact that there’s room for clear, sober eyes alongside, say, the ludicrous bragfests of ‘Stay Gold’ and ‘Call Ticketron’ (the latter, perhaps not unreasonably, predicts a Madison Square Garden headline show in the not-too-distant future). They can turn the politics all the way up to incendiary when they want to - ‘Hey Kids (Bumaye)’ is blisteringly aggressive in every respect - and yet still find room to goof off; El proclaiming himself the “nut punch wizard” on ‘Everybody Stay Calm’ is up there with the line about running backwards naked through a field of dicks on RTJ2.

Maybe it’s that dichotomy that makes Run the Jewels the most exciting prospect hip hop currently has, even in an age when Kendrick is revolutionising the genre, when Kanye is redefining the word megalomania and when Chance the Rapper is leading a vanguard of new talent for whom classic LPs look like a foregone conclusion. What none of those can offer, though, is the increasingly unshakeable feeling that the two decades’ worth of hard yards that Mike and El put in is what makes RTJ so special. Nobody fresh out of the blocks could ever make a record this vital sound quite so effortless. That’s the only issue with RTJ3; the sense of triumph occasionally spills into self-satisfaction, and the next stop would be complacency. This is an album that could easily be subtitled Mission Accomplished, but for once, it feels like bowing out on top would be ill-advised. That, in itself, is quite the compliment.