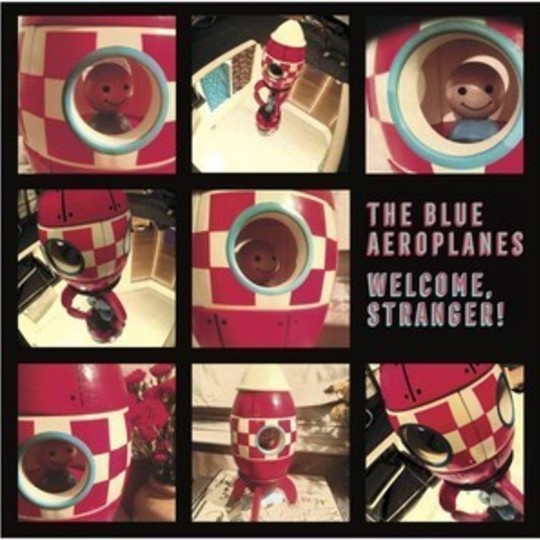 The Blue Aeroplanes have always been so individual - almost aggressively so if they hadn’t been so self-aware of the one-the-nose-ness of their 'artrock' - that when they take ten years to release an album, it seems safe to assume it’s because they’ve waited til they’ve got something new to say, something really creative to do. And what they’ve come up with is… not exactly that.

There are enjoyable elements to Welcome, Stranger! - Gerard Langley’s sprechgesang that typifies their artrock™ sound makes a welcome return, their classic mostly fluid, occasionally crunchy guitars play melodic riffs. But the guitar tone stays more or less the same throughout, doesn’t change nearly as much as we’re used to hearing from them, and often these riffs follow chord patterns that just aren’t that compelling. The would-be fun track ‘Elvis Festival’ fails to sustain any intrigue for very long because powerchordy riff in the verses just isn’t that interesting. If the first you heard of the Blue Aeroplanes was ‘Sweet, Like Chocolate’, you might even dismiss them as a dadpop band. These are riffs that have lost their colour, their three-dimensionality, and, frustratingly, their sense of identity. Closing track ‘Poetland’ starts off sounding a bit more interesting, but the chorus reverts similarly frustratingly to a throwaway chorus, complete with piano-banging (and in a later verse drops a reference to geishas that has no use beyond using real lived oppression as lyrical decoration - #LeaveItIn2016). And while they were never a bass-driven band, the bass used to have its own deliberately audible, often countermelodic part, it used to feel like it took part in the 'conversation', in a manner of speaking. The approach to Chris Sharp's bass on Welcome, Stranger! seems to treat it as largely just for texture, aside from on ‘Here Is the Heart of All Wild Things’. This too feels like a subtle loss.

Equally metonymic for this sense of loss of identity are the frequent melodies given to the main vocal lines, such as in the choruses of ‘Looking For X’s On A Map’, ‘Sweet, Like Chocolate’, and ‘Walking Under Ladders for a Living’. Later, ‘Skin’ is sung by new-ish addition Bec Jevons, whose voice, while perfectly good, sounds more like Veruca Salt covering one of the 'misunderstood' tracks off Kiss Me Kiss Me Kiss Me than a Blue Aeroplanes song. Meanwhile, the cliché hook of ‘Nothing Will Ever Happen In The Future’ - “Want to be wanted / Need to be needed / Love to be loved” feels a tragically far cry from the inventiveness and the uniqueness that used to define them.

This doesn’t amount to an unpleasant album, but the Blue Aeroplanes used to be intriguing, make you want to listen again; Welcome, Stranger!, unfortunately, leaves the listener largely nonplussed. And while a lot of these tracks are perfectly nice-sounding, it feels a bit tragic to consign a record by the Blue Aeroplanes to the background. This is of course not to say they should stay the same way forever. The problem is, in trying to create something that would constitute a development for them, they’ve made a record that sounds less creative, less inventive, and less interesting than anything they’ve ever done; this musical growth sounds sadly like shrinking.