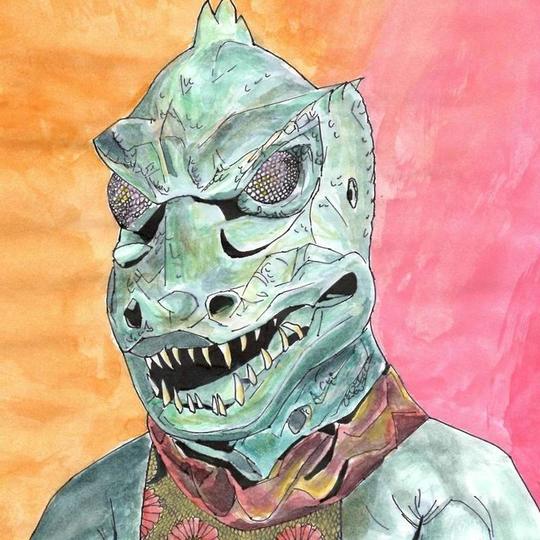 Rarely does something this fully-formed, self-assured, and strikingly individual launch onto the scene as this sort-of debut from Goldblooms. Tripping around momentarily in an intriguing, spacey chaos, label debut Hostile Takeover then explodes shimmering into a rainbow of noisepop magic.

This sci-fi theme recurs throughout the EP, as with the title track a fairly on-the-nose allegory for their fear of Trump’s presidency - “This is NOT an alien invasion”. Meanwhile ‘Time Arrow’ crafts its anxious time travelling love story into the impeccably catchy chorus “I’ll be there yesterday / I was there tomorrow / And I’ll be back in time today” (“back in time”, geddit? Very nice).

Throughout the EP Goldblooms weave expertly from impossibly catchy to just a bit batshit to seamlessly back to impossibly again, as this outstanding sense of pop makes for some stellar instrumentation. All of the first five songs are packed with sparkling guitar and synth riffs, held together by subtle enough but pleasingly fun bass parts, holding back just so and then going for it according to how 'big' the sound is. The drumming adds to this effect too, subtly reigning the sound in for verses and building up to big, clashy choruses.

The only remotely iffy thing to be found here is the final track, ‘[outerlude #1]’, seemingly intended to recapitulate the theme of spaceyness, to tie it all together into a 'concept'. It just seems a shame, after the energy-packed creativity that jumps and bursts and never rambles for the first five tracks, to screech to such a halt and keeps us there for seven and a half minutes. Maybe for one or two it might’ve been interesting, even intriguing enough not to kill the energy built up, but seven and a half of really not much variation at all fails to keep the audience rapt.

For all the rest of it though, Hostile Takeover shines with energy and innovation and seriously catchy pop, with an established “sound” without the slightest hint of repetitiveness. I can’t wait to hear what Goldblooms come up with next.