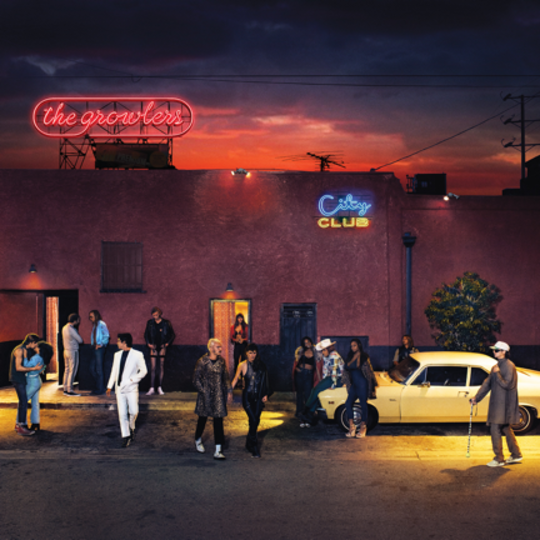 As is the case with the majority of human beings, Julian Casablancas has fingers, and on these fingers he has finger tips (more than likely, I haven’t checked). In his 38 years on this planet his sticky mitts will have touched millions, perhaps billions, of objects. While you’d have to be some sort of super forensic scientist to identify his prints on the majority of things, there are one or two places where even the naffest scientist would be able to recognise the presence of good old Julian.

City Club, the sixth album from those Californian garage fiends The Growlers, is so stained by the touch of Julian Casablancas that I wouldn’t be surprised if the record bled leather jackets and knackered Converse.

In their decade-long existence, the group have released record after record of psych rock madness, building up quite a cult following along the way. While they have never been afraid to explore new sounds, however, even by their own standards, City Club is a somewhat surreal departure from their usual nutty rock template. Gone are the fuzzy, scuzzy guitars and tripped out vocals and in are the funked up synths and ice cold pop sensibilities. This sound shift is not unlike that of Unknown Mortal Orchestra, who’s own brand of psych pop has recently evolved into a surreal form of garage funk.

Openers 'City Club' and 'Vacant Lot' bob along with a familiar funky strut, inviting the listener into a crisp, squeaky clean, coked up Miami club. However, as the record progressed this initial charm wears off. The crisp production and fake Eighties sensibilities begin to grate and everything starts to sound a hell of a lot like our man Casablanca’s back catalogue, in particular his first, failed solo attempt, Phrazes for the Young. All of the sickly ingredients are there on 'Dope On A Rope'. Cheesy synths, fuzzy vocals, mechanical drum beats and pedestrian bass tickles. It comes as no surprise then, that City Club was produced by and released on The Strokes main man’s Cult Records imprint.

Once or twice we are treated to a few seconds of what the group are capable of, however these moments are few and far between. On the whole City Club is full of the type of synth funk nonsense that should have been left alone in the late Noughties. It’s quite odd that The Growlers knack for a 'big' chorus has come at the same time as their experimentation with a genre that sounded out of date even during its inception.

It’s admirable that The Growlers have refused to stand still, however if this record has taught us anything, it’s that it’s incredibly important to make the right moves when trying out new sounds. Let’s chalk this up as a failed experiment. At least now we know that garage rock and Eighties synth funk don’t get along.