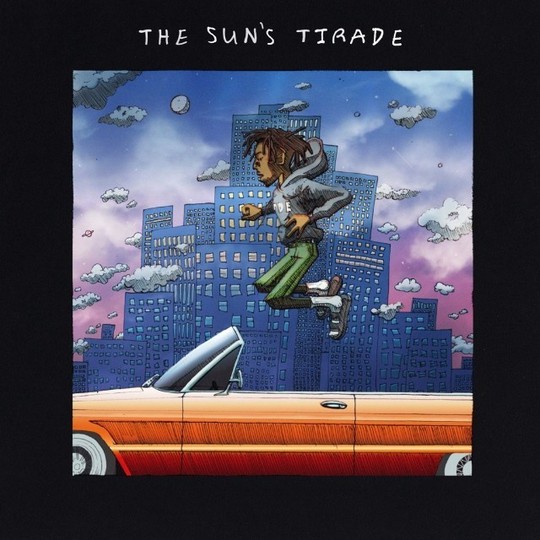 Anyone who's been anywhere near me since Isaiah Rashad's Cilvia Demo came out has either heard me go on about it or been subjected to repeated playings of it. It was a cult hit that didn't seem to reach the superstar status many felt it deserved, especially being released on TDE, the label that's home to giants like Kendrick Lamar and Schoolboy Q. It also fell into that modern hip-hop trap of being very difficult to define: I've heard it variously described as an album, a mixtape and an EP.

One of the first tracks that got Rashad attention was '2x Pills' in which he raps over a Flying Lotus beat. In FlyLo's music I find there is both a push forward into making something new while also having reverence for older musical forms like soul and spiritual jazz. Part of what I loved about Cilvia Demo was the way Rashad seemed to do something similar as he rapped over off-kilter post-Dilla rhythms and cloud rap alongside updated jazz-rap beats. OnThe Sun's Tirade he raps over a drum 'n' bass-ish break and a trap Mike-Will-Made-It beat, but he mostly leans in favour of this more reverent jazz-rap style. This is one of the big differences that TDE artists have with the other major players in hip-hop at the moment. While Kanye, Future, Drake and Young Thug are seeking out the shock of the new, there's something a bit more traditionally hip-hop about TDE with Kendrick Lamar's jazzy verbosity and Schoolboy Q's nu-gangsta persona. All of this being said, The Sun's Tirade is a good hip-hop album, especially for a chill summer's day.

On …Tirade, Rashad's beats seem to be slightly more aimed at occupying the background to allow him to rap, something that doesn't quite suit him as well. Rashad is less the type of rapper that keeps you hanging on his every word and more the kind that knows how to use his voice as an instrument to contort rhythmically, texturally and melodically. Rashad's blurring of singing and rapping is his closest link to ATLiens like Future and Thug, who use their voices as textural instruments just as much as (if not more than) ways to deliver lyrics. The songs here are fairly consistently good, they just don't reach the same heights as some of his previous work. The album has a low-key stoned feel to it that doesn't exactly scream major label debut, it's certainly a far cry from the recent maximal opuses of TDE labelmates.

In fact, aside from Kendrick's appearance on 'Wat's Wrong', it appears that TDE is content for Rashad to continue flying somewhat under the radar. The album is probably best taken as a whole (or at least in large chunks) but 'Free Lunch' is the best representative of the album's sound. Over a Thundercat-esque bass figure, Rashad spins a slight but catchy hook while extolling the virtues of welfare assisted free lunches. The least interesting track is 'A lot', a straight-up trap track. Rashad's sleepy flow doesn't exactly work with this sort of beat as he lurks in the shadows rather than leaping into it the way rap's current roster of weirdos might do. Overall, this sleepiness is part of Rashad's appeal as he seems, at this rate at least, to be on track to be a beloved cult rapper rather than a giant on the level of Q or Lamar.