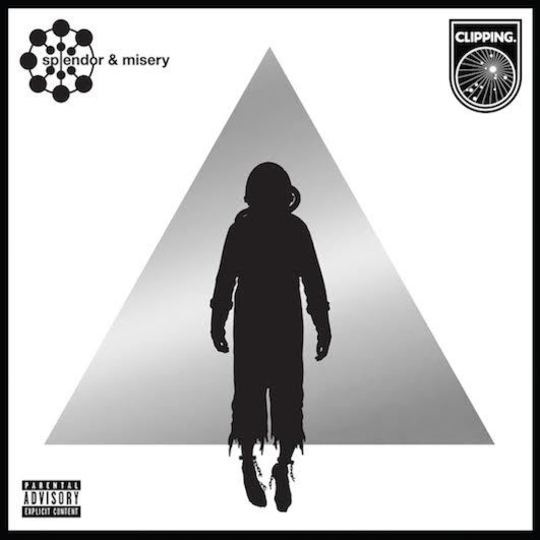 Daveed Diggs of clipping. is probably the only person to both front a noise-rap group and be an acclaimed Broadway actor (prove me wrong MC Ride). Since their debut album, Diggs has starred as Thomas Jefferson in Hamilton, the Broadway hip-hop musical about the American 'founding father' Alexander Hamillton featuring only actors of colour. If you haven't been paying attention, said musical has been somewhat of a smash with the play receiving basically every award it is possible to win with Diggs himself winning both a Grammy and a Tony award while playwright Lin Manuel-Miranda was given the MacArthur 'Genius' grant. It feels like this has had a large influence on the development of this album, which is very different to the more Death Grips-ish CLPPNG.

Splendor & Misery is very much based in story and in the way of a musical, if you don't pay great attention to the lyrics, there's very little to grab onto here. After the wonderfully inventive production on the last album, it's disappointing that the beats here take more of a back seat in support of the lyrics. The increased focus on Diggs' voice can quickly become rather annoying: he doesn't quite have the charisma to pull it off. The story itself details the interstellar escape of a slave who hijacks the vessel he was onboard only to have the guidance computer fall in love with him. It's not in fact terribly interesting and the weak songs do little do keep your attention. At its most theatrical, there are even a few a cappella 'space shanties' that just seem vaguely embarrassing in the context of a hip-hop album. Despite the group's avant noise-rap aims, this doesn't come across as the sort of existential sci-fi of 2001 or Solaris (the Tarkovsky one), it's got a much pulpier comic book feel to it.

As the music generally takes a backseat to the narrative, there are actually very few whole songs here. Seven of the tracks are less than two minutes long. These short tracks serve more of a purpose than the sort of skits that plague albums like 3 Feet High And Rising, in that they generally serve the story, but that still means we're left with only a few distinct songs. Really the album boils down to 'All Black' and 'Air 'Em Out' as the memorable parts of the album. These are both so-so hip-hop tracks that verge on the side of being a bit corny. If the group's last album showed us the spectrum of their talents from the brilliant 'Work Work' to the I-can't-believe-Sub-Pop-released-something-so-bad 'Tonight', most of this album sides closer to 'Tonight'.

The problem with clipping. is that they sometimes seem to have an unusual idea of what makes good hip-hop. Sometimes it feels like the purely hip-hop side-project of a dodgy rap-metal group circa 2003. If this was a sci-fi film it'd be plagued with bad CGI and dodgy acting, but I would've probably been pretty into it as a 12-year-old.