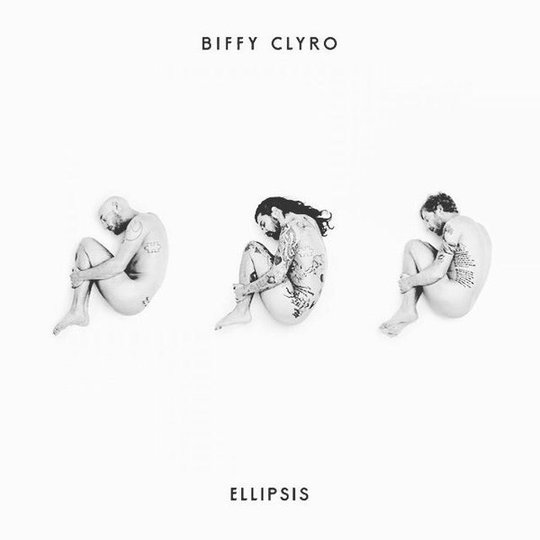 The conundrum facing Biffy Clyro is obvious. Where do you go when your last album was a double, you’ve played an arena tour and headlined Reading Festival? It’s the question that confounds so many acts when they hit this stage of their career. They’re in a similarly difficult situation to Muse in that they’ve got a fan base split in half between the edgier and ambitious early material, and the more radio-friendly recent output. They also both have a breakthrough album that everyone seems to agree is good (for Puzzle, see Black Holes and Revelations). The seventh effort from Muse managed to please most parties if not all. Can Biffy Clyro achieve the same with Ellipsis?

Early signs were certainly good. The two tracks released before Ellipsis appeared to cover all bases. ‘Wolves of Winter’ grasped that obtuse approach that they had in their early career with a slow electronic intro and riffs in tricky time signatures later on. Then came ‘Animal Style’ with a far more conventional structure that seemed to finally perfect the radio-friendly approach they’ve had in recent years. So far, so good and both tracks are highlights, given away early in the tracklisting with ‘Friends and Enemies’ sandwiched in between. That track ticks all the boxes you'd expect from an arena band, with instruments dropping out to leave just vocals and guitar and an easily memorised chorus that asks "with friends as good as you, who needs enemies?". There’s even multi-layered vocals in the background just in case you were in any doubt about whether you’re supposed to sing along with that bit. As with ‘Animal Style’ though, it feels natural and perfected where on Opposites in particular it occasionally felt forced.

One thing Biffy have consistently done well through their career is slower racks. That started properly with ‘Machines’ but includes anything from ‘Opposites’ to ‘God & Satan’. The quality levels are maintained here because the album feels like it has more than its fair share of slowies. ‘Re-arrange’ and next single ‘Medicine’ best showcase this, although it does somewhat go against Neil’s earlier assertion that he wanted Ellipsis to encompass a raw sound. ‘Re-arrange’ and ‘Medicine’ are both satisfying tracks but not exactly the most creative arrows in their quiver. Unfortunately, the overall downside to this is that this side of the album is a little predictable.

Crucially though, no song on the record feels like filler and it certainly doesn’t fall into the category of product put out as an excuse to tour like you might see with many bands this far into their career. ‘On A Howl’, towards the end, is a good example of the band still keeping things fresh. It’s one of the few moments on the album that really brings out the odd side that fans will have been hoping for. And since the live scenario is so important to a band like Biffy Clyro, it’s also not hard to picture this going down a storm at festivals. Similarly, two tracks earlier ‘On A Bang’ marks itself out as the best track on the album. It heavily recalls that repetitive rhythm that Queens of the Stone Age brought out on ‘Sick Sick Sick’. It’s the albums heaviest and most creative moment, flitting between structures and a chorus that says "now you know better, why can’t you fucking do better?" It’s easily the one those old school fans will be sticking onto their playlists. ‘People’ then closes the album out with a beautiful melody before the record finishes on the line "I have the cruellest mouth, and a sick little tongue."

You can’t help but feel that anyone expecting this to be a return to the approach of their first three albums is going to be disappointed. Infinity on High, this ain’t. What it does do is take the formula they’ve used in the latter part of their career and refine with shades of the quirks and weirdness of their early days. As with Muse and their seventh album Drones, Ellipsis isn’t a career-defining album. That’s okay though, not every band can be Radiohead or The National, where every release feels crucial. Sometimes taking what you’ve already done, and doing it better, is enough and shouldn’t be examined too deeply. This is a worthy addition to their catalogue and a couple of songs are their in years. For a band on album seven, that’s still an achievement.