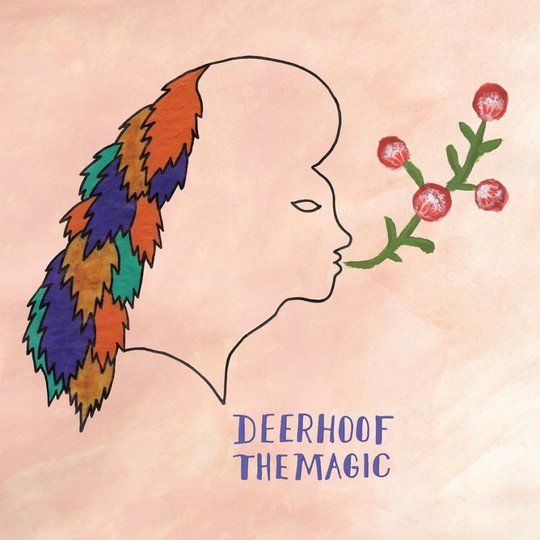 Deerhoof are a bunch of eccentric rock’n’rollers who know as well as you or I that neurosis is the flavour of the day. The sure-footedness of domineering/profiteering Top-40s radio is responsible. Outside the unconstrained nucleus of the music industry, what can a poor boy wanna do but freak ‘em all out? The Magic, Deerhoof’s splendid new record, is fraught with neurotic tumult. The songs are founded on Deerhoof’s now familiar virtuosic instrumentalism: they operate at high energy, and they take countless sharp turns. It should come as little surprise, too, that 16 albums in, their newest is perhaps the most purely fun to listen to.

What is surprising is that the sounds of the music industry nucleus are surprisingly well-represented. Take 'Kafe Mania', track two. For the first 25 seconds it could be a Black Keys song. Then the vocals come in — whimsical, largely indecipherable — and then there’s a synth in the interlude that reminds you about darkness. But for a second there, it sounded straight-up, almost radio-ready. That midtempo chug. Which, in fact, recurs quite a bit: 'Criminals of the Dream'. 'Learning to Apologize Effectively', and 'Plastic Thrills', all use it.

Or take 'Life is Suffering', track four. It starts out straight funk. A percussive stutter, then a real gritty, gutty bassline, that you realise is in a slightly off-kilter signature, and then that howling lead guitar, and then another strange vocal line, and you’re back in Deerhoof territory. The chorus marks the arrival of a different sound — not lightyears away, but a bit more Motown than Funkadelic. 'Model Behavior' has that same sense, the way it morphs a funk groove into some kind of psych-jazz. From funk to Deerhoof to Motown and back, and then elsewhere.

'Criminals of the Dream' may be the most distinct in this blending of sonic characters. The first 45 seconds sound like a rewrite of the Twin Peaks theme, self-consciously sappy synth, before the song reasserts itself in that steady-chugging Stones territory. Then singer ‎Satomi Matsuzaki tells us: “It’s not right if everyone fights to dream at night…wondering where the magic hides.” Suggesting, I think, that everyone ought to have equal access to ‘the magic,’ which is there all around them, always, and that it gets obscured by infighting. Which speaks to the underlying optimism in the otherwise nihilistic-seeming lyrics. It’s important to remember that the first sound of the album is Matsuzaki speak-singing “The magic”, as if to say that everything that follows is indeed the magic that people fight to recognise. Perhaps the more accurately punctuated quotation would be, “The magic:”.

I think of Deerhoof as a band inexorably concerned with disorienting their listeners, the mission of which is to say that they’re not satisfied to give you cheap, predictable thrills. And, also, that you shouldn’t be satisfied to receive them. The Magic doesn’t abandon this mission, but it pushes it a little further toward the backburner. There’s a steady flow between pastiche and original voice. It’s sometimes abrupt, sometimes not, and always punctuated by distinct Deerhoof moves — polyrhythm, flexible keys, and lyrics whose tone you can never quite pin down. The instrumental skill that Deerhoof loyalists have come to love abounds, and front and centre is a resounding, absurdist joy.