An Arms Reach Away/Darkness Inside 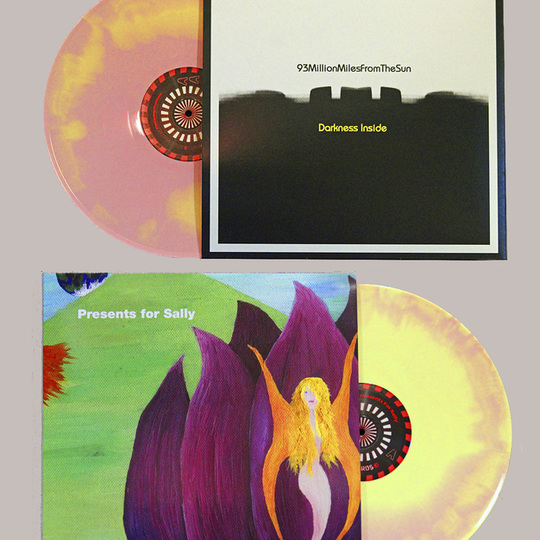 Fledgling independent label Wrong Way Records may have been in circulation for only a few short months, but they're steadily establishing themselves as one of the most forward thinking imprints on the shoegaze and psych rock underground. Last month's excellent Rancho Relaxo LP White Light Fever paved the way and they've followed it up with another dazzling release featuring two luminaries of the current UK shoegaze scene.

That both Bristol's Presents For Sally and Doncaster's 93MillionMilesFromTheSun released arguably their best albums to date in 2015 is by-the-by. This split mini-LP - on impressive 'fruit salad' coloured vinyl no less - further highlights the talents of each act. While also displaying the diverse nature of their make up and songwriting that sets them apart from any early-Nineties revivalists who've jumped on the bandwagon in the wake of so many first wave acts reuniting.

Comprising eight pieces of music in total - four each - across two sides of vinyl. Presents For Sally's contribution, entitled An Arms Reach Away, showcases them in four very different guises. While the title track itself is perhaps the closest to the traditional early Nineties template ('Funky Drummer' beats, high levels of reverb, vocals low in the mix), it also displays a pop sensibility not always necessarily brought to the forefront where these kind of acts are concerned. _"Don't throw it all away!" implores vocalist Matt Etherton and we're reminded of The Boo Radleys at their most fragile. Etherton's wife and bass player Anna takes up lead vocals on '1000 Magic Lands', an altogether more mournful affair that's owes as much to American slacker lo-fi such as Yo La Tengo or Juliana Hatfield as it does Creation Records.

While decibel levels are increased once more on the diminutive 'Not Young Not Old', closing number 'Perfume Boat' pays homage to fellow Bristolians Sarah Records, its tranquil structure reminiscent of former label darlings The Field Mice during their halcyon Skywriting phase. With the band about to embark on an enforced hiatus shortly (Ms Etherton is heavily pregnant) they've signed off with one of their most potent releases to date.

Having been one of the most prolific bands on the scene since releasing their self-titled debut in 2008, 93MillionMilesFromTheSun have chosen melody over sonic excess for the most part here. Opener 'I'm Waiting' comes on all loud and heavy at the beginning but soon gives away to a more flatlined approach that highlights Nick Mainline's vocal as a soothing presence in this kind of context. The title track of side two, 'Darkness Inside', bears a slight resemblance to Desert Mountain Tribe's 'Interstellar' even though it's highly unlikely either band will be aware of the other's composition. Wrought with sentiment yet audacious in delivery, it's up there with 93MillionMilesFromTheSun's finest works and heralds their newly extended four-piece line-up in monumental fashion.

'Fall Into The Sky' and 'Edge Of Nowhere' complete their contribution, and while the former is probably the most conventional of the four songs on offer here the latter's grandiose finale provides a fitting ending to another impressive - albeit minute by their standards - collection.

Two incredible bands currently on top of their games, one fantastic LP.