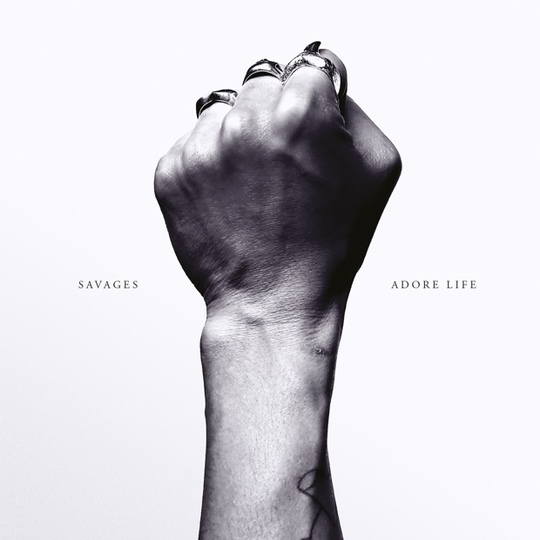 In a week in which I’ve wanted to listen to zero music by anybody other than David Bowie, it’s been strangely bracing and instructive to have been required to repeat listen to Adore Life, the second album by Savages.

Colour, humour, whimsy, drugs, abstraction, musical restlessness: these Bowie-ish qualities are not ones you associate with Savages. And yet that’s kind of the glory of them: in between maudlin listens to Blackstar and Low and Outside and Aladdin Sane and Diamond Dogs this week, Adore Life has kind of held its own, in its own territory.

Where the excellent Silence Yourself had a slightly manifesto-y quality to its lyrics, Adore Life is dominated by singer Jehnny Beth’s pathologically earnest decision to tackle the big themes of love and life. If she was British it would definitely come across as unbearably hackneyed. But she's not: the woman formerly known as Camille Berthomier is very, very French, and it's her piercing, almost holy seriousness that defines and sanctifies her band this time out. Exactly why this is important I can't quite place my finger on: maybe too many English people have now sung too many things about love for anything new to feel meaningful; maybe we're simply too self-conscious a nation to sing about love properly anymore; maybe it is that glorious French cop-out, je ne sais quoi; maybe it’s nothing to do with her being French and more to so with her being Jehnny Beth, her words dissecting romance as clinically as a scientist, as zealously as a religious fanatic.

Whatever the case, just take a bloody look at the extraordinary video for recent single 'Adore' and you'll see what I mean. There isn't an English person alive who could deliver that chorus with that incinerating, unblinking, belief-filled stare, and even if you take away the visuals you're left with as remarkable a piece of music as you'll hear all year.

"I understand the urgency of life" Beth declares, and I fucking well believe her.

The song – a slow-burning, distorted epic that's as close to post-rock as new wave – is the apogee of the band's work: a dramatic canvas that presents Beth as some sort of apocalyptic torch singer rather than just the singer in an indie rock band.

Indeed, the thought occasionally occurs that without Beth, the three rosbifs in Savages would be a very decent post-punk revival band but altogether less timeless – the music would feel retro in a way it doesn't npw. It's her cold-eyed, stone-chiselled seriousness that makes their music impervious, weaponised.

Still, that's not really fair – they have a je ne sais quoi too, a sort of intuitive grasp of atmospherics that makes even the more formulaic songs on Adore Life – I'm thinking 'Evil', 'Slowing Down the World' – feel poised and important.

But it's when the band and singer are in accord that this record really floors you: opener 'The Answer' crashes in with the paranoid fury of prime Throwing Muses – "if you don't love me, don't love anybody" Beth keens over a furious roil of guitars and drums. "Love is a disease, the strongest addiction I know, what happens in your brain is the same as a rush of cocaine, the more you have the more you crave" she yelps over the propulsive roar of 'Sad Person', like the person you'd be the most afraid to ask out on the entire planet. ‘Is it love or is it boredom that took me up to your bedroom?" she howls over the panic attack maelstrom of 'When In Love’. “When I take a man, or a woman, they’re both the same, they're both humaaaaaaaaaaaaaaaaaan” she drawls over the ominous minimalism of 'Mechanics', and somehow it feels incredibly profound, not so much the words as the significance she invests into them. Indeed, many of the lyrics on Adore feel like an almost autistic attempt to dissect precisely how love and sex work, and it sounds extraordinary, an explorer travelling wide-eyed into the gulfs of her own soul.

It will be fascinating to see what comes of Savages in years to come: after two albums it feels like there is something inherently immobile about them, like it would be a betrayal of something fundamental in their nature if they stopped making humourless, intense, monochrome guitar rock. Maybe they’ll prove me wrong; maybe I’ll be right but it won’t matter. Whatever the case, Adore Life still feels like a step forward, not because it’s different, but because it’s more so. It takes real bravery to write an album so honest and exposed, and it takes something more than bravery to do so in way that sounds like you’d batter everyone in the room if they took the piss. Life is a serious business and Savages are a serious band.