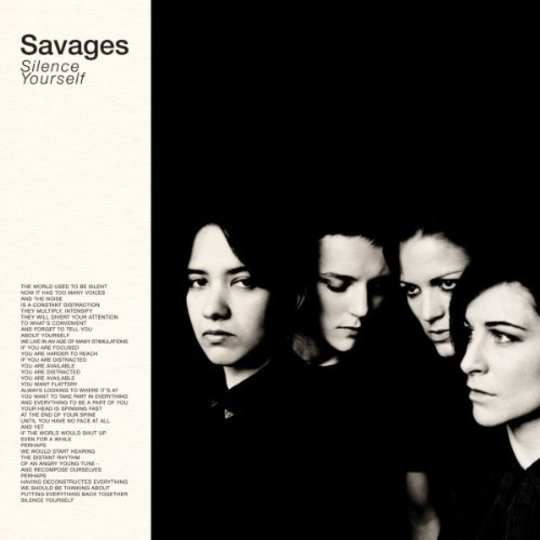 People say, 'When you see them live, it makes sense.'

But what do they mean, it? Do they mean the cult, the credibility inflation of Savages? The hype, the column inches, that whole horrorshow? Sometimes you suspect they mean something more. Some eternal psychological struggle, perhaps - such is the irrational vertiginous joy of the performance. Whatever it is Savages have got it, both onstage and on record. And being righteous, reasonable humans, their yen is to share it with us.

The music Savages make is defined by a blistering compassion for their characters and what they represent. In a recent Exclaim! interview, lead singer Jehnny Beth detailed the band’s proclivity for psychosocial commentary: 'Music has emancipated me, pornography has emancipated me, people, lovers. And I think art in general is here to soften social transitions... Potentially, people who come to see us play, they will receive a sound, they will receive a word, and something will happen. They will go back home and maybe they will look at their husbands differently, look at their family differently, friends, lovers, their job, what kind of music they listen to. Because nothing else is asking you to think about these things! Where are the things that make you reflect?'

Jehnny Beth’s appeal hinges on a righteous fury that’s carried well into adulthood. And why not? Post-punk’s motifs of social oppression and isolation haven’t diminished in vitality; arguably they’ve scarcely been weightier. Social progression since the first waves of punk and post-punk has possessed purpose and momentum, but not such purpose and momentum as one might have hoped. By this token Savages are no less relevant a social force than their Thatcher-era forebears. They might not have the propulsion of punk behind them, but they are saying something of value. Which is probably lame, dumb and kind of passé, but mostly admirable and exciting and cool.

An exhaustive influence deconstruction is titillating and perhaps unavoidable for those of a certain age, but listening to Silence Yourself there’s little inclination to bother. There exists a passing resemblance between ‘Husbands’ and Dead Kennedys’ ‘Holiday in Cambodia’, while ‘Shut Up’ nods tentatively to U2’s ‘I Will Follow’, a song whose Christian undertones prove two bands operating in similar styles can contradict one another entirely and yet collide head on at the destination of excellent music.

All in all, however, the record’s quality not only overcomes but dismisses accusations of necrophilia. To quote literary critic Howard Bloom, it’s possible for exceptional artists to draw so masterfully from their influences as to 'achieve a style that captures and oddly retains priority over their precursors, so that the tyranny of time almost is overturned, and one can believe for startled moments, that they are being imitated by their ancestors.'

At times you feel this phenomenon in effect. The songwriting of Silence Yourself is blunt but nuanced, direct but diverse, reaching the listener by way of immersion rather than contemplation. The record proves surprisingly unpindownable, from the elegiac piano’n’clarinet comedown of ‘Marshal Dear’ to the Liars-like frenzy of ‘No Face’, a palpable undercurrent of paranoia as much channelling 13 Songs-era Fugazi as Siouxsie & The Banshees. Elsewhere they tweak the modern post-punk formula whereby sparse passages of instant gratification prop up otherwise tedious structures. Sometimes these songs forego any sense of release whatsoever, subsisting on a darkly seductive tension. Their verses sound like Mission of Burma choruses. Jehnny Beth’s shrieks in ‘Waiting for a Sign’ evoke Nick Cave eviscerating PJ Harvey in one of his dungeons; the finale of ‘I Am Here’ is pure peak-form Iggy Pop, JB’s articulation of quietly unhinged euphoria unimprovable.

Strip away the context of Silence Yourself and the opposition seems baffling. Although much of the eye-rolling is motivated by honest ambivalence, some aggressors have resorted to a lame sort of internet slander, disgruntled so-over-that types claiming that the band’s impressive coverage stems from a fiendish PR campaign (there wasn’t one) or savvy label-backing (they were unsigned until earlier this year; Matador stepped in to help Jehnny Beth’s Pop Noire label with distribution).

Amply weighted for a debut, Silence Yourself comprises a balance of really excellent stuff and the simply very good. It never flounders but occasionally drops into fourth gear on flimsier tracks like ‘Strife’ and ‘Waiting for a Sign’. But such glitches are beside the point. Because when you look at fans of indie boy bands with songs as deliciously English as warm lager and casual racism; and at fans of tepid buzz bands singing about drugs, clouds and their least interesting dreams; and when you notice in both camps a deep strain of crypto-conservatism, and decide that even if you’re not interested in Savages you’re probably, y’know, okay with having them around - it makes sense. By attacking in basic terms the ideals of their peers, their critics and often their supporters, Savages equip themselves to search out a meaningful generation gap. And if the proliferation of riled-up deniers proves only one thing, it’s that whatever it is Savages are doing, they’re doing it right. For that alone they’re priceless.