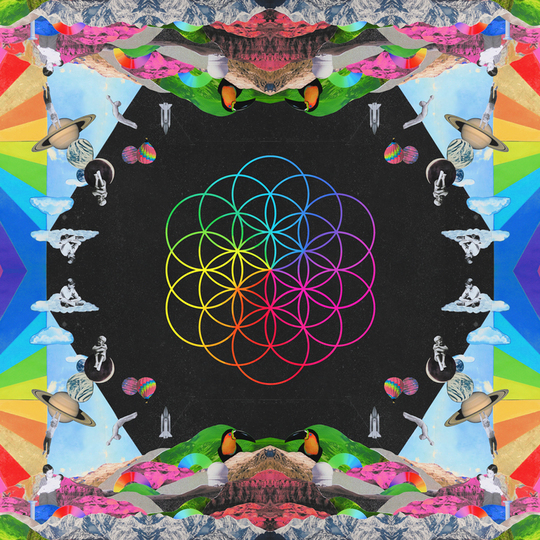 “Turn your magic on!” could well be the Chris Martin lyric to end all Chris Martin lyrics. It’s got the requisite amount of look-to-the-heavens wonder and potential glass half empty subtext you come to expect from a pen that spills both exuberant and wistful ink, and, well, it’s really rather naff and desperate.

If last year’s tonally confused Coldplay album Ghost Stories was Martin’s break-up record, A Head Full of Dreams is an attempt at moving on, rebounding into the sun with head held high, a smile on the face and bright colours painting the path. Yet the head feels weighed down with unresolved torment, the smile forced and awkward, the colours garish and messily-applied.

Shortly after Martin speaks of magic like it’s some kind of previously unacknowledged human characteristic on the album-trailing ‘Adventure of a Lifetime’, he notes that he is ”a dream that died by light of day”. There’s room for interesting duality here, and there’s no real reason why Martin can’t embrace the strange and thus mix light and dark effectively. However, he’s not interested in blurring the lines and so ‘Adventure of a Lifetime’, like so much of A Head Full of Dreams, is merely a throwaway nothing.

It’s odd to accuse Coldplay of a lack of ambition. No, really. Love them or loathe them, they’ve been quite committed in their bid to usurp U2’s throne – and spray paint it in neon pinks and blues, presumably – and thus have pushed their sonic boundaries as much as a mainstream stadium-sized outfit can over the years. Like Bono and friends, Coldplay are a quite fine ‘Greatest Hits’ band. Sure, their name tends to provoke rolling of eyes and genuine invective but you could easily cherry-pick from their discography and assemble something worthwhile. A Head Full of Dreams, for all its studio razzmatazz and encouragement of celebration, has no place at the party.

The weird thing is that Coldplay have already made this record, and they did it a good deal better, too. Mylo Xyloto is unlikely to pop up in many considered retrospective lists but it’s certainly one of the most interesting entries into their canon, nailing pop sensibility and emotive wandering in its best moments and failing somewhat nobly in its stumbles. A Head Full of Dreams, on the other hand, sounds like a well-studied, rigid, demographic-conscious impression of Coldplay, empty as a consequence.

It all just kind of sighs along, right from the opening gush of bargain bin Edge riffing and clunky disco rhythm. There’s some utter nonsense about “miracles at work” and “a conference of birds” (yep) before it all leads, inevitably, to the big “woah-oh-ohhhhh” moment, the staple of bands who really have nothing to say so let’s just do that thing that the big crowd likes to do. Compelling stuff, Chris. ‘Birds’, meanwhile, is The Cure by way of Phoenix, nicking the drums from ‘Close to Me’ and coasting by on familiar French zeal. Other efforts like ‘Fun’ (yep), ‘Army of One’ – and its weird swagger-laden hidden track – and ‘Up&Up’ all feel tired and hollow.

As for the Beyoncé-assisted ‘Hymn for the Weekend’, the words ‘career’ and ‘nadir’ don’t quite do it justice, so we’ll let Martin’s hilarious explanation from his Wall Street Journal interview take over:

'The original kernel was that I was listening to Flo Rida or something, and I thought, it’s such a shame that Coldplay could never have one of those late-night club songs, like "Turn Down for What". What would we call it if we had one? I thought I’d like to have a song called ‘Drinks on Me’ where you sit on the side of a club and buy everyone drinks because you’re so f—ing cool. I was chuckling about that, when this melody came —“drinks on me, drinks on me”—then the rest of the song came out. I presented it to the rest of the band and they said, “We love this song, but there’s no way you can sing ‘drinks on me.’” So that changed into “drink from me” and the idea of having an angelic person in your life. Then that turned into asking Beyoncé to sing on it.'

Minutes later, he’s in front of the piano singing mournfully about celestial lions.

Every new Coldplay album comes loaded with some kind of dramatic narrative hook. This time around, A Head Full of Dreams is not only totally, definitely the album the band most enjoyed making, honest, it’s purportedly their final bow, too.