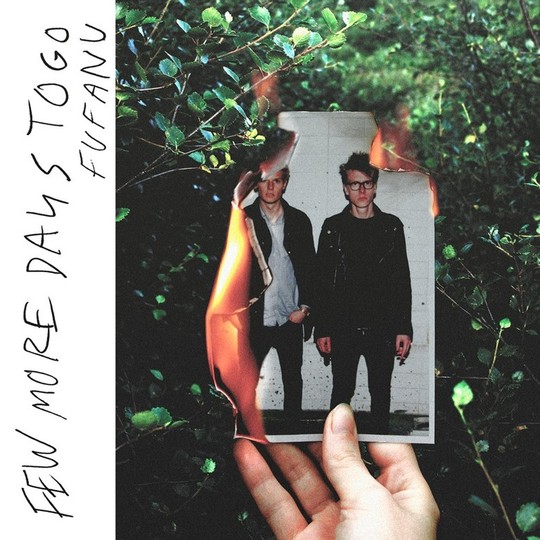 I’ve lost track of the number of indie bands I’ve seen 'go electro' in recent years. Granted, some have done so more successfully than others, but it’s nevertheless refreshing to hear a group making the opposite transition. Of course, Icelandic duo Fufanu have been able to nurture their current guise while remaining relatively free of the scrutiny of the international press. Kaktus Einarsson and Gulli Einarsson previously made experimental techno under the name Captain Fufanu, until all their recordings and backups were stolen from their studio - an event which proved to be the catalyst for the duo’s rebirth as Fufanu (they left the captain behind at a rave in Cologne, apparently).

Few More Days To Go is the end result of this transformation, and though there are some stylistic vestiges of the band’s previous guise - the low hum and metronomic beat as ‘Now’ kicks off the album, ‘Wire Skulls’ buzzing, mesmeric synth bass - their music now recalls Eighties post-punk pioneers such as Bauhaus and Joy Division. But thankfully, Fufanu’s sound is far from slavish imitation - despite sounding like a Nordic Ian Curtis at many points on this record, Kaktus hadn’t even heard of him before the press started drawing parallels between the two. Indeed, even if there are comparisons to be made, there’s always an interesting twist to them. ‘Now’ sounds like the ghost of Joy Division haunting a long-abandoned rave, ‘Northern Gannet’ and ‘Blinking’ could have been recorded by The Horrors in the period between ‘Strange House’ and ‘Primary Colours’, and ‘Ballerina In The Rain’ feels like a twisted, noir-tinged version of Eighties electro-pop.

The lyrics are also a varied bunch. Sure, there are tried and true topics - ‘Now’ is a tale of broken-heartedness (“The sun never shines/except when you’re with me,”) and ‘Goodbye’ is similarly themed around the departure of a loved one - but there are also more curious topics at hand. The unlikely dream of being a ‘Ballerina in the Rain’ is the theme of the record’s most whimsical moment, ’Your Collection’ matches its purposeful rhythm with the idea of taking ownership of your life (even if the rhyme scheme in the chorus is a little heavy-handed), and ‘Wire Skulls’ references the fateful event that would eventually lead to the creation of Few More Days To Go (“Everything got stolen that night.”).The most interesting lyrics are those of ‘Circus Life’, whose tale of being trapped in a travelling circus could also be a metaphor for a life dominated by service industry drudgery (“a circus job is a circus life/the rule to follow/the show must go on”). ‘Plastic People’, on the other hand, falls a little flat, its drug-addled paranoia somehow coming across as a little mundane.

It’s also worth noting that Fufanu’s live reputation has also provided a solid foundation for their debut, and the loud/quiet payoffs are some of the most satisfying moments on the record. ‘In the Light of the Night’ explodes into a storm of My Bloody Valentine-esque noise, ‘Now’ takes on a new-found malevolence as it reaches its close, and ‘Circus Life’ works itself into an almost deranged crescendo. And yet… these moments have a far more visceral quality when witnessed live. There’s no doubt that Few More Days To Go is an intriguing record by a very promising band - but it also feels like this is just a taste of their true power.