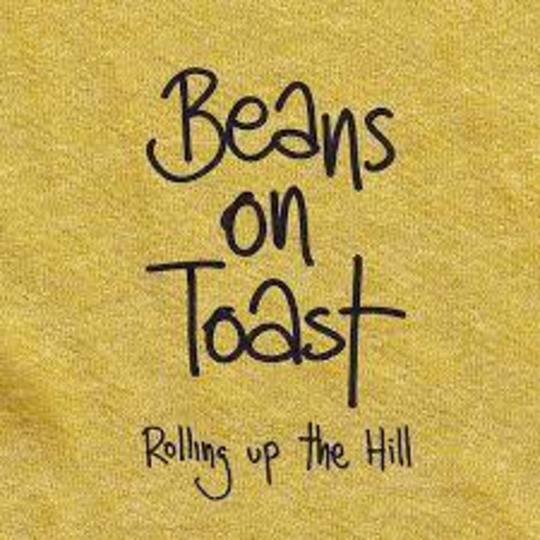 Beans on Toast is a singer-songwriter I was only moderately familiar with before coming ears to noise with Rolling Up the Hill. He wrote a weird song about fancying Laura Marling back when she first showed up with 'New Romantic'. We had that in common, Beans and I.

For those who aren’t familiar, Beans on Toast is a refreshingly simple take on music at a time when all the best artists seem to be pop or electronic. He’s on Xtra Mile, also the home of Frank Turner, so this should come as no surprise. If you’re looking for a raw take on the singer-songwriter genre, then Beans is your man.

Themes tend to be those of a typical left-leaning nature. I mean that in the best way possible. If you love what Enter Shikari sing about but you’re not keen on the vibes, then come on over. The track 'Robin Hood Costume' picks apart capitalism and the futility of electronic cash. He raps: "The money in your bank doesn’t even exist. We never another plan of attack, we need to find a way to take our humanity back."

Consistently, this sort of theme depends entirely on your usual tolerance to it. What is definitely refreshing, whatever your stance, is a singer-songwriter tackling themes other than relationships (thinking of Ed Sheeran primarily with this dig).

That’s not to say that Beans doesn’t tackle that obvious theme of relationships. 'I’m Home When You Hold Me' wades into that particular subject but does so in a typically Beans on Toast way. It’s a modern take that references Netflix and a ridiculously hectic schedule that can cause issues for budding relationships.

'God Is In A Cartoonist' takes a not-so-subtle swipe at those who attacked Charlie Hebdo, which may seem outdated given the current news agenda but still stands out as one of the strongest messages on the record. Like Turner (on 'Glory Hallelujah') he takes a dig at the concept of religion and sings: "Every Christian, every Muslim and every Atheist has a God-given right to take the piss." The freedom of being an artist in the situation that Beans on Toast is results in him being able to tackle issues like this with refreshing honesty and seriousness. Despite that seriousness, it’ll still make you laugh.

Beans on Toast has been around quite a while now. His old-school take on the genre makes him seem a little older than he probably is though. 'Middleagedman', which closes the album, is the sound of Beans coming to terms with the looming threat of middle age. He sings: "We promise to meet up under better circumstances, and though everyone means it, everyone doubts it, and that’s fine." The second half of the track focuses on what’s good about those things, such as a wife and children. It’s a great way to close the album because it’s not the standpoint that is usually taken by artists. He even says that he doesn’t think a mortgage is so bad. Compare this to the wistful and rueful opener in 'The Mudhills Crew' and you have an album that comes full circle.

Still, while the album does come full circle, the themes inside the actual album veer wildly. That’s totally fine, not every album needs to flow. Given how the tracks on this record are pretty similar in terms of how they sound, the wide spectrum of topics is probably a good thing.